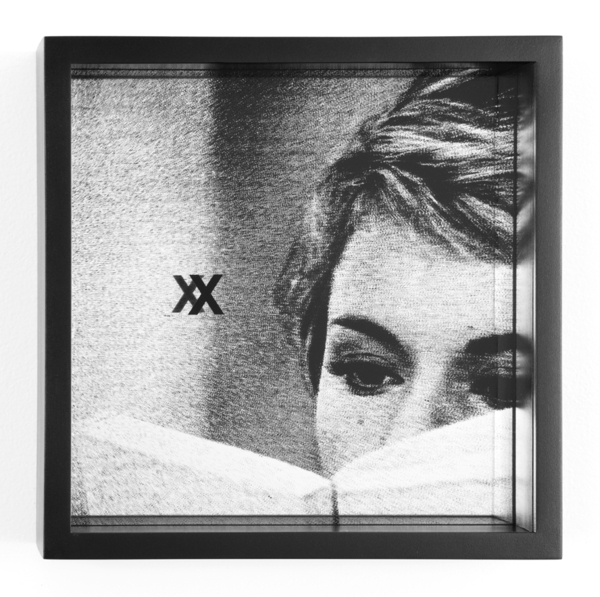 Pendleton encloses the top of each squared object with a glass surface imprinted with a simple letterform. These characters are remnants of words—such as “N” from “ancient” and “S” from “sullied”—Pendleton culled from poems. Removed from their original meaning, the letters become markers, seemingly signifying a defined logic to the object-forms hung in neat rows across the gallery space.

Inside each box, Pendleton placed a mirror displaying a grainy, blurred image of a female subject. Pendleton selected the women from film and photo sources, isolated the figures from their original settings, and then repeatedly Xeroxed each image to strip out details. In “G,” “C,” “E,” “U” and “X,” Pendleton telescopes on a solitary woman with her face partially concealed by the book she’s reading. Each iteration reinterprets the scene, alternately revealing the title of the book, more of her facial features, or fingers clasping the book’s corners. It’s unclear whether Pendleton intends to highlight minute stylistic manipulations, or a shifting voyeuristic gaze cast upon this unknowing subject’s private moment.

Many of the source images had ample negative space that, after being silkscreened onto the mirror, left large portions of its reflective surface empty. The mirror’s static space becomes animated when a person encounters the sculpture. In a film still from Godard’s “Breathless”—presented in both “S” and “L”—Pendleton shows the profiles of two women, the actress and a painting behind her. When I add my reflection, the work contains three versions of a “woman” and seemingly recalls Joseph Kosuth’s “One and Three Chairs,” in which he complicated the relationship between concept, language, and (re)presentation.

The recognition of myself in the final mirrored layer reminded me that, no matter what viewpoint I derived, interpretation is subjective, determined by my personal history and accumulated experiences. Rather than overtly denounce searches for objective truths though, Pendleton instead creates pleasurable exercises in futility. (Laura Fox)

Through May 7 at Shane Campbell Gallery, 673 North Milwaukee.