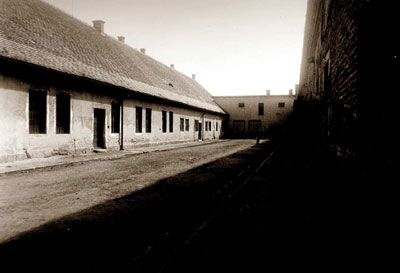 Belgian photographer Claude Andreini’s black-and-white small-format studies of the Nazi death camps of Auschwitz and Terezin are meant to renew memories of the Holocaust, yet—more than anything—they evoke the quietude and loneliness of derelict institutional spaces of any kind that, in this case, have been kept intact frozen in time, stripped and bare. Often shot at dusk or in the dead of night, always shadowed and often dimmed, and usually empty but sometimes including a solitary walker, Andreini’s images are reposeful and contemplative, not horrifying, even when they depict guard towers. We need to know what happened at these sites for Andreini’s photographs to incite remembrance; if we do not, we are moved to think of life that has departed, leaving its shell behind, rather than death. A sense of peace permeates Andreini’s images—the peace that inheres underneath and that surrounds human desires and deeds, for good or ill. (Michael Weinstein)

Through June 3 at the Chicago Photography Center, 3301 North Lincoln