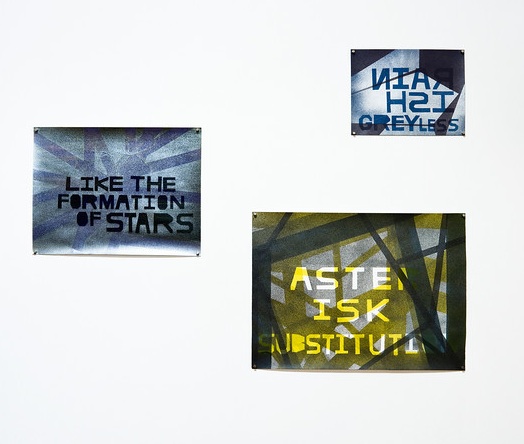 Where Ed Ruscha and Kay Rosen’s text paintings tend to satisfy some autistic word fixation, it is Mark Booth’s text-based work that, for me, finally prompts poetic reverie. And that’s because the work is poetry, and Booth’s own. His drawings on paper, of texturally dense and hand-lettered phrases, may be familiar to Chicago gallery-goers, but for his solo exhibition at Adds Donna, Booth takes an expansive approach, filling the rectangular gallery with hand-cut vinyl sentences that extend over three walls, a sound recording of the artist reading a looping poem, plus several of the drawings. The result is a holistic presentation of Booth’s skill as a writer and a visual thinker.

It’s by perfect chance that any visitor to Booth’s show, titled “God is represented by the sea,” must first pass eight derelict wooden church pews crammed in the corridor by the gallery’s entrance. The pews are a non sequitur prelude to Booth’s own chain of figurative associations that begin God. The recorded poem, “God is represented by the sea,” which is broadcast over the gallery’s speaker, has little to do with God or even religion, except to be of use as an open abstraction, breeding metaphor after metaphor in a hall-of-mirrors game of compact visual phrases. 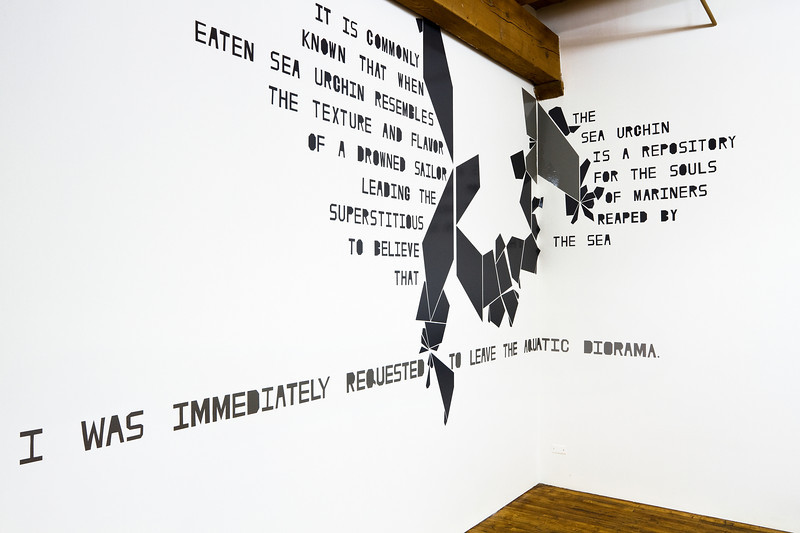 It begins: “God is represented by the sea / The sea is represented by an irregular shape / An irregular shape is represented by space / Space is represented by carbonated water,” and continues for more than seventy lines until it loops back on God. The visual language draws heavily from nature, but also includes intrigue-boosting objects such as a metronome and a geodesic dome, and although they can be strange, funny and ambiguous, they make a good case for the injection of feeling and the senses into thought. The sound recording is read slowly, with longish pauses of quiet between each phrase, so that the artist’s voice casually interrupts and weaves into a gallery visitor’s reading of two wall texts, one about the erotic licking of a narwhal’s tusk and the other about the morbid taste of sea urchin. These are presented in wall vinyl letters, commonly used in gallery settings as textual framing, but Booth’s hand-cut letters channel the playful genre of Concrete Poetry rather than the voice of authority.

Booth’s freeform experimentation with his own medium was given room to grow by the hands-off creative direction of the Adds Donna gallery owners, a collective of artists who open their Far West Side show space to artists who can think big. Booth is clearly in a place where he’s solidified the strengths of his art practice, but the gift of space makes this poet sing. (Jason Foumberg)