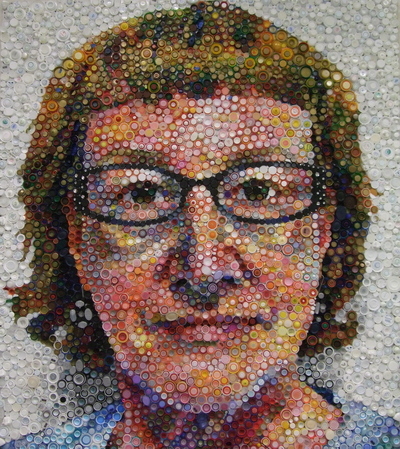 The title of Mary Ellen’s Croteau’s eight-by-seven-foot bottle-cap mosaic self-portrait is “Close,” a reference to Chuck Close, whose giant gridded portraits captivate museum-goers with their scale and verisimilitude. In this case, however, the medium is the message, as Croteau’s clever repurposing of seven thousand multicolored bottle caps not only captivates us with its sleight of hand and representational skill, it embodies and envisions a green worldview. Croteau produced a complex shifting texture out of these lowly materials by nesting the bottle caps to create depth and nuances of color. The portrait gazing out at passersby on Armitage Avenue is direct and at the same time lacking a sense of presence: it seems to be an image transposed from a photograph. Hovering at the edge of art and craft, like a giant needlepoint in its display of patience and meticulous skill, but without needlepoint’s connotations of luxury calling up a lost upper class feminine world of handmade textiles, her portrait evokes nothing so much as human condition on the northwest side of Chicago. 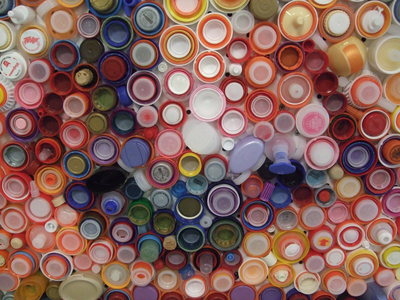 Croteau, a former member of the Artemisia Gallery, in its day one of the preeminent feminist collectives in the country, has been interested in the fate of refuse for awhile, making quilts of photographs of people living on garbage dumps, so her production of a giant self-portrait out of bottle caps is a bold extension of that project. The mosaic not only reminds us that every one of us uses a million bottle caps during the course of our lives, but calls our relationship with them into question—am I actually the sum total of what I consume and throw away?—while it proposes that, with some ingenuity, collaboration (many people contributed bottle caps to the project) and vision we can transform these and possibly other overlooked mundane and environmentally problematic materials into something magical; that is to say, art which enlivens, colors and calls attention to the world we live in. (Janina Ciezadlo)