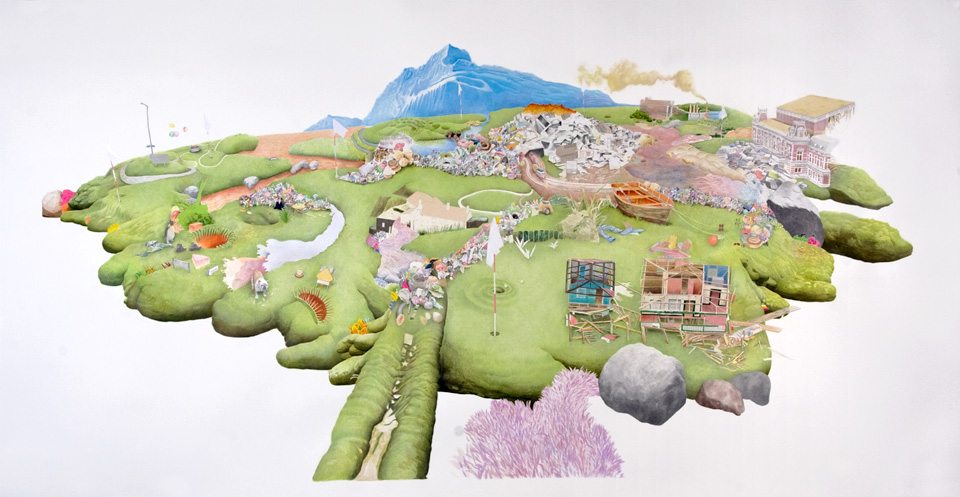 The mantra of “Nulla dies sine linea” (“Not one day without a line”) has inspired and motivated artists and writers for centuries as a reminder that an artist’s skill and a successful work of art must come from daily practice. Pliny the Elder penned the Latin proverb in ancient Rome, Anthony Trollope advised the phrase to aspiring writers in the nineteenth century and Whistler inscribed a drawing in his diary with the same line as a personal reminder.

At the Instituto Cervantes, Madrid-based gallerist Blanca Soto brings together twenty-three artists from Spain on the premise of this proverb, attempting to elevate the “underestimated art” of drawing and showcase contemporary Spanish works on paper. For such grandiose aims, the net cast is not very wide, for over half of the artists also happen to be represented by Galería Blanca Soto. “Nulla Dies Sine Linea” has a curatorial premise that is vague and flimsy, at best. The long halls and small gallery of the Spanish cultural center and language school are crowded with an overwhelming number of drawings that have little in common but an amateur hand and a questionable lineage from graphic street art. The drawings on display encompass a range from over the last decade, and strangely, Soto has chosen early, less confident works from artists like Sofía Jack who have matured more gracefully than is evident from this exhibition.

However, amidst the fray, conscientious diligence does make an appearance. The most mature drawings in “Nulla Dies Sine Linea” are those that incorporate collage and mixed media, such as José Luis Serzo’s graphite fantasy worlds of “Las gratas historias” and Luis Pérez Calvo’s Sunday comic broadsides for “The Day the World Ended.” By far the most powerful work in the show is Santiago Talavera’s nine-foot-long colored pencil and collaged drawing, “The Island of the Voracious,” an intricate cross-section of a product-filled yet eerily consumer-less golf course island. The collage is subtle, adding flashes of rude color and disorienting shifts in perspective to a scene that is as tightly rendered and strange as a fifteenth-century Dutch painting.

Through July 6 at the Instituto Cervantes, 31 West Ohio.