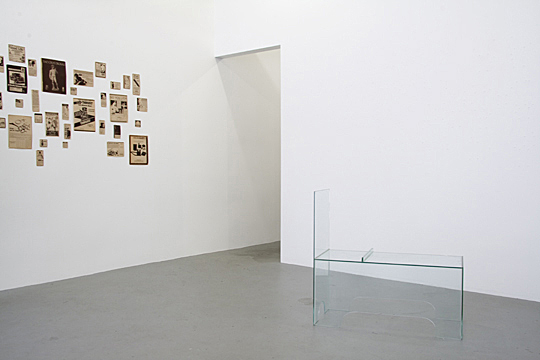 In 1998, one year before he died at age 33 of AIDS in Chicago, the artist Robert Blanchon created “Untitled (drawing horse),” a replica of the type of benches that students use in a drawing class, but made entirely of glass panes. Blanchon probably enjoyed the fact that, in order to use the bench properly, an artist had to keep their legs spread wide open in front of their art, like a perpetual flirtation. Indeed, sex and the body were the subjects of much of Blanchon’s art, but as “Untitled (drawing horse)” sits today in Golden gallery, on loan from the Blanchon Estate, the glass bench is present like a ghost, its sitter palpably absent.

Here, the drawing horse faces fifty-five ad clippings from gay sex magazines, pinned to a wall. There are not ads for escorts or dates but from companies selling poppers (a sex drug), dick cream, cock rings, a chest-hair wig and other sexual enhancements—even one from the Tom of Finland studio where men could commission portraits. This collection of clippings is another Blanchon artwork, “Untitled (aroma/1981),” from 1995. (The “1981” in the artwork’s title references the year that HIV first started to reveal itself.) In addition to this collection being an archive of back-page gay graphic design and desire in a pre-AIDS era, it is also a dynamic object. Originally, Blanchon photographed and re-printed these clippings, but he did not complete the crucial final step in the hand-developing process, which is to dip the reproductions in a fixative bath. Therefore, the reproductions, once hung in a gallery, are intended to fade and disappear rather quickly and perceptibly during their exhibition. Likely the original magazines would fade anyway, being printed on cheap paper or newsprint, but Blanchon was aiding their demise. 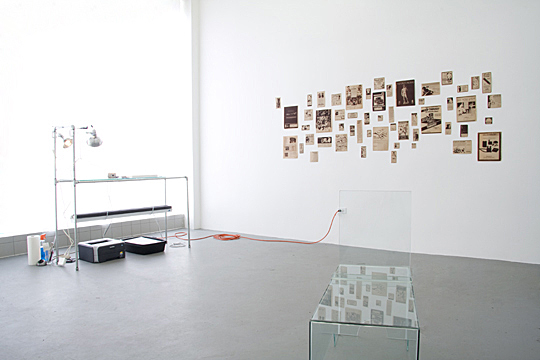 The exhibition at Golden is not a Blanchon retrospective but a collaboration between one living artist and one deceased. John Neff, with organizational help from Golden’s Andrew Blackley, is reactivating “Untitled (aroma/1981)” by re-printing the fifty-five ad clippings and pinning them to a second wall, and looking forward to their short lifespan in the sunlight. Neff’s printing bed is sited in the stark white gallery. The printing bed’s form mimes Blanchon’s drawing horse but it is also reminiscent of a gurney in a surgical theater. It’s a fitting form for Neff’s resuscitation of Blanchon’s dormant artwork.

In many of the ad clippings, poppers (or amyl nitrite) are featured, which is a chemical drug taken for its euphoric effect during sex. In the early 1980s, when HIV was a large and deadly mystery, some scientists speculated that unknown chemicals were to blame for this new “cancer,” and they pointed to poppers. The connection between the poppers and the chemicals used in the photography developing process is important here, such that the rebirth of these images is also the reason of their destruction. By 1995, when Blanchon conceived of this artwork, the poppers accusation was old and absurd news, but there was still no cure for the virus. Neff’s gurney would thus be located in a hospital where patients are not healed but only perish. It compounds the despair and victimization that Blanchon would have felt knowing that he was in line to die. 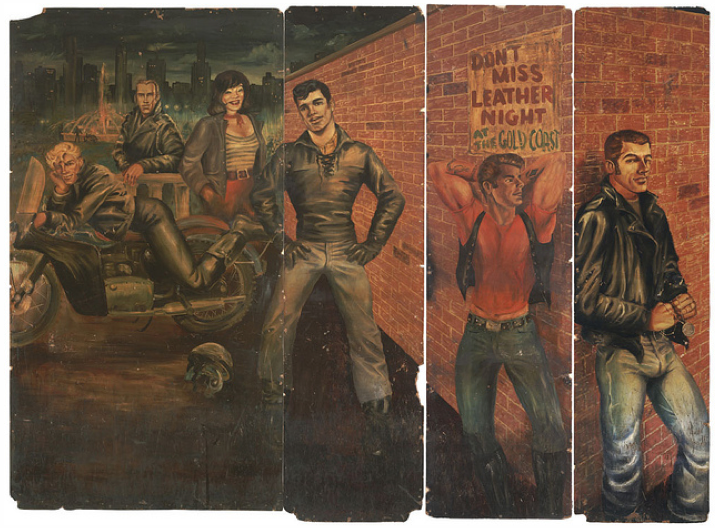 A different sort of bed appears in the “Out in Chicago” exhibition at the Chicago History Museum, which tours 150 years of queer life in the city. This bed is a replica of the sort that itinerant laborers would have shared in same-sex dormitories, and it appears alongside Jane Addams’ old couch. It’s not explicitly stated that the laborers had queer sex in these overcrowded beds, but it is implied by the bed’s inclusion in the show’s narrative. “Out in Chicago” shares many fascinating details and artifacts from gay culture, but much of the material is presented as if this were its audience’s first exposure to gay people, so it takes a little extra attention to fill in the gaps. For instance, a nineteenth-century penis clamp meant to remedy sexual “inversion,” or homosexuality, is on loan from the International Museum of Surgical Science, in Lincoln Park. Just about two miles away, at the International Mr. Leather festival, surgical phallus implements were being sold to gay sex fetishists. What a fascinating inversion of control not told by the exhibition. (Chuck Renslow and the leather competition do make an appearance later in the show.)

“Out in Chicago” moves along with a very strong, almost artistic, exhibition design. In one section, visitors can “step into the shoes” of deceased transgendered people by looking into a darkened box and seeing their own face reflected in a mirror, which is mediated by a hologram of the dead person. It’s a creepy sort of technology that disembodies the viewer and possesses them with a digital queer spirit. There’s so much to like about how strange this is, but it ultimately says little about the actual people being presented. In another area, a bar is recreated using rainbow-colored alcohol bottles, presumably because a lot of gay history has taken place in bars. Accordingly, Etienne’s mural from the Gold Coast bar makes an appearance here. The painted figures are all denim, black leather and muscle, and still vital despite their age.