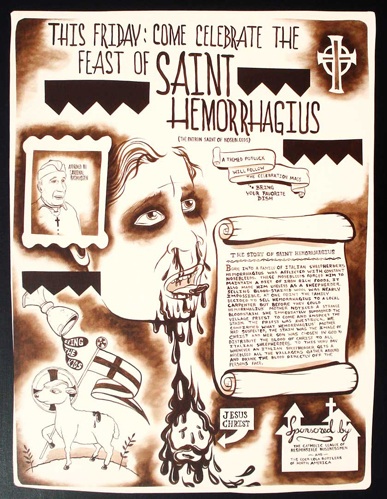 The mainstream thread of recent art comics, inaugurated by Art Spiegelman’s  Raw magazine in the 1980s, is known for an emo horn-rimmed literary confessionalism that has resulted in the McSweeney’s publishing phenomenon and Michael Chabon’s “Kavalier and Clay.” The obscene “primal father” figure, however, is that of 1960s underground comics, exemplified by R.Crumb on the comics side, and Peter Saul on the fine art side: explosive and expulsive horror vacuii images that picked obsessively at the scabs of racial, gender and religious anxieties that confused and frustrated the angry white men of the counterculture. In the art world of late, Kara Walker and Sue Williams turned this illustrational language against itself, while Paul McCarthy and John Currin elevated violent machismo to a transcendent onanistic level. In comics, Johnny Ryan and Michael Kupperman are creating absurdist provocations with greater self-awareness than their knuckle-dragging ancestors.

Sitting comfortably in the middle of this tradition is Mark Mulroney’s work, now on display at Ebersmoore. The bravura cartoons of squirting wangs and boobies in his opalescent monochromatic oil sketches are reassuring in their decorative hedonism. Mulroney’s crude humor shares a level of commendable competence with his formal execution. The requisite dig at feminists, an acrylic on panel advertisement for a book titled “Kleenex and Coathangers,” is worth a chuckle, as is a flyer for Saint Hemorrhagius, the patron saint of nosebleeds, whose stains resemble our Lord. Made-up Kanji characters in the piece “Oppai Yakyou,” however, and the promo for a display of Sammy Davis Jr.’s severed head, veer toward unredeemed poor taste. The vivid paintings of naughty images taped to notebook paper are somewhat bland but not unattractive, rounding out a show that takes on a safe form of risky art with considerable if not total success. (Bert Stabler)