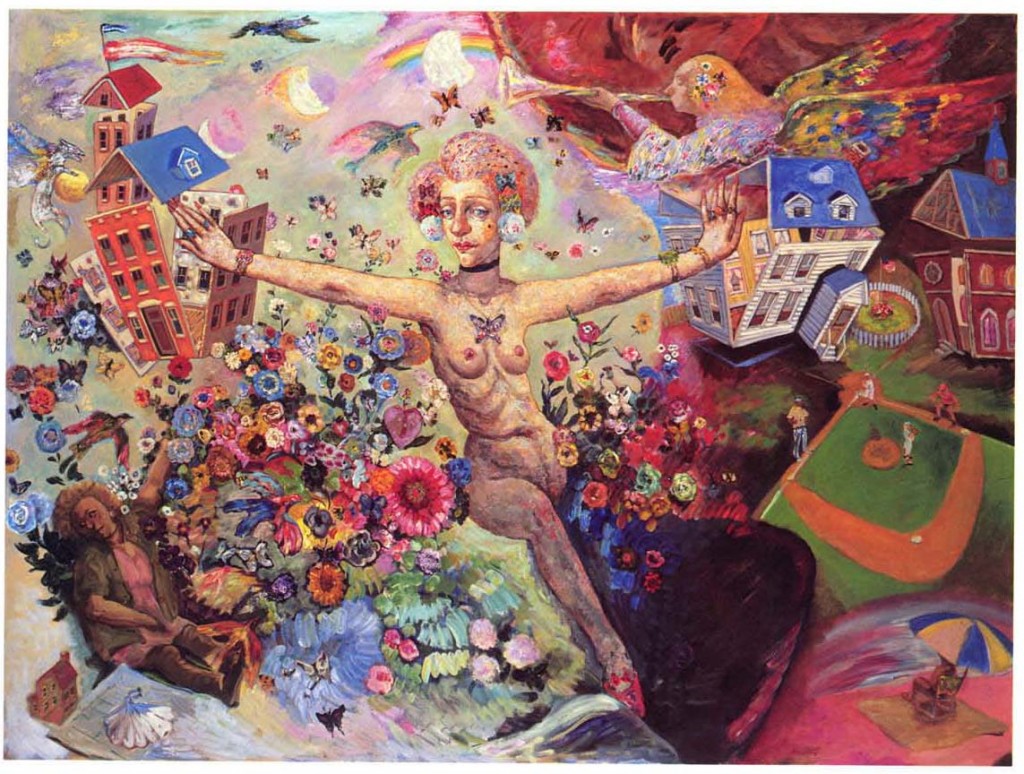 “Lady of the House – Venus”

Among Chicago Imagist painters, Seymour Rosofsky (1924-1981) was both the most classically trained and the most puzzling.

A second generation, blue-collar Jewish kid from Chicago, Seymour’s talent was recognized early and he ended up studying oil painting with Boris Anisfeld at the Art Institute. He picked up that Russian’s dreamy, decorative style, which might be called classical but was hardly naturalistic. As Anisfeld once said “I always see a thing first in color and I paint what I feel, not what I see.” Rosofsky also became an art-museum junkie, both in Chicago and Paris, drawing from a variety of primitive, post-impressionist, surrealist and expressionist art. But when he put it all together, it was all about himself. There’s a musty, cluttered, claustrophobic feeling about his work, with the viewer often placed in the role of the therapist puzzled by the highly emotional, confused world of a patient who feels trapped in a female-dominated, family-centered life.

In a 1972 review in Time Magazine, Robert Hughes called Rosofsky’s work a “wretched thesaurus of clichés,” while in his first posthumous retrospective, the Chicago Tribune’s Alan Artner noted the “loose ends” and “a tendency to overload his pieces.” Doubts have even been raised about his technique. Hughes called them “clumsy paintings,” though  Franz Schulze applauded his “rich color, carefully interwoven tonalities and assured drawing,” especially in comparison with the brutally clumsy or severely cartoonish neo-expressionism of the 1980s and thereafter.

What comes across from the fifteen pieces in this exhibition is the honesty of an artist who was painting to explore personal issues rather than to attract attention. His paintings are stocked with clichés from Giacometti, Bacon, Chagall and others because he loved art history, and they are no more clumsy, cluttered and confused than his own happy/sad domestic life. He exemplifies the passion, resilience, and time-honored futility of his favorite team, the Chicago Cubs, while offering a big, painful slice of modern life, with thirty-two flavors of melting ice cream poured on top. (Chris Miller)

Through September 4 at the Elmhurst Art Museum, 150 Cottage Hill, Elmhurst.