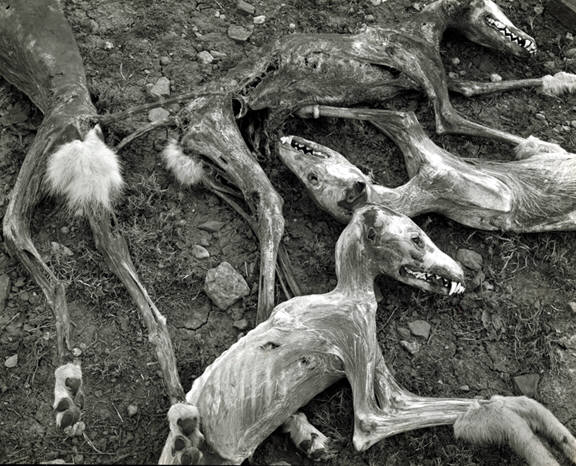 In this lavish show of black-and-white and a few color images taken in the last half of the twentieth century, from the collection of the late Jonathan Williams, who was a noted photo critic and whose non-profit Jargon Society press published poetry paired with American modernist photography, we look back on a sensibility that pressed against the confines of realism but still remained anchored to the world. Having bagged some big game, like Harry Callahan (about whom he published critical essays), Aaron Siskind and Ralph Eugene Meatyard (a book of whose late photographs he published), Williams also caught many minor masters like Wynn Bullock and Frederick Sommer, the latter of whom encapsulates the critic-collector’s proclivity for a gothic sense of life. In one of the most grisly yet somehow fascinating and even grimly amusing death scenes, Sommer captured a plot of stony, scraggly ground on which are strewn the carcasses of four coyotes sporting hideous snaggly teeth. Williams also collected some feel-good images, but his heart was in the darkness. (Michael Weinstein)