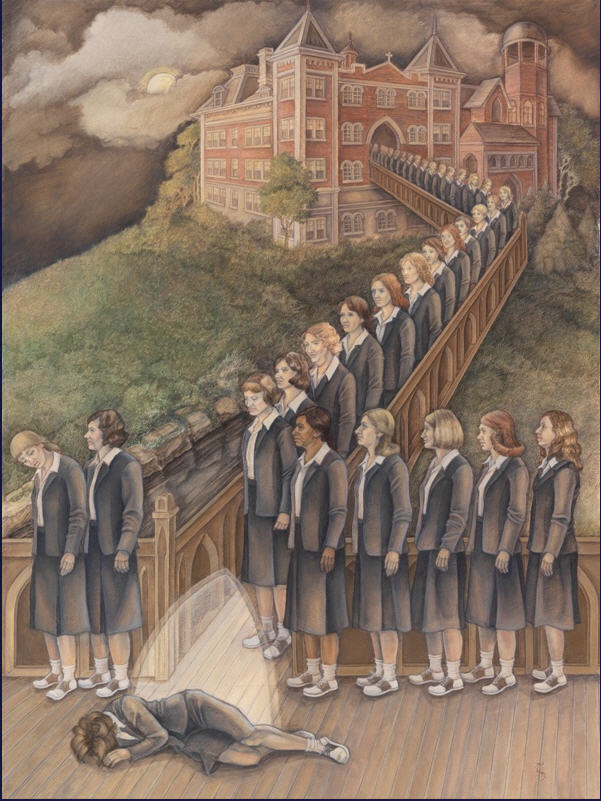 “Was dying as she thought, or different?”

Art is one of the few professions where playfulness is encouraged. You don’t want your orthopedic surgeon playing around with your hip, but it’s okay for an artist to play around with shapes and references, and the artworks themselves, like tarot cards, for example, can be used for either serious divination and self knowledge, or just to play a game like poker.

Rita O’Hara’s acrylic, gouache and watercolor paintings are very much like tarot cards. They offer archetypes like the mandala (self), the butterfly (soul), the fish (transition), etcetera, and she is quite serious about them. She is not a commercial artist dabbling in metaphysics to design posters that hang above the scented candles in a new-age bookstore. She’s had a long career counseling the chronically mentally ill and adults with developmental disabilities. But neither is she a therapist dabbling in art. Over that period, she has chosen and followed a single teacher, Robert Guinan, the master of a clean, sparse narrative style that effectively presents gritty life on the streets of Chicago. O’Hara has adapted that style to present the buoyant but sometimes desperate life of the soul in the sunless world of dreams. The sense of craftsmanship is impeccable, as it should be for such a serious subject. Whether they work as vehicles for self-awareness is another matter, and perhaps, despite claims to the contrary, the archetypes she employs are more specific to her background in a blue-collar Irish Catholic family than they are universal. To her, for example, a swan represents the supernatural, while to me, it’s the aggressive, voluptuous bird that’s always been trying to mate with poor Leda. But still, I found some of her images haunting and memorable, like the parade of uniformed women in “Was dying as she thought, or different?”

Despite her religious background, what’s missing from her vision is Jesus, Mary, or any other helpful deity. O’Hara’s searching souls are on their own, and that loneliness often feels sad, even depressing. What’s also missing is that sense of cosmic glory that can make visionary art so attractive, even if you don’t share the faith being promoted. Many pieces resemble medieval book illumination, but not as cheerful and robust.

O’Hara’s dim, anxious dream world feels authentic, so it can probably be important to those who feel that they have also been there. For the rest of us, the primary attraction might be the craftsmanship. (Chris Miller)

Gallery phone number is (312) 744-4550.
The Renaissance Court Gallery at the Chicago Cultural Center is managed by the Chicago Dept. of Family & Support Services.