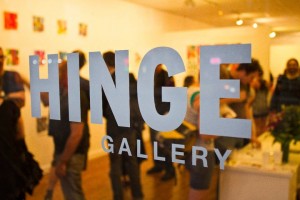 It’s happy hour at Hinge Gallery. Co-owners Gretel Garcia Cuba and Holly Sabin sit in the front room of their storefront space on Chicago and Damen, drinking Blue Moons and talking with two friends and a printmaker they’ve commissioned to paint his first mural in the gallery’s back kitchen. “We like to encourage people that already have a body of work to continue exploring new ideas,” says Cuba.

After meeting seven years ago as members of the same art collective, Deadline Projects, the pair began seriously talking about opening a gallery this past February. “We thought if we put our forces together we could really create a space of our liking [to showcase the work of] artists who are around the same age range as us and whose work is just undersold and underrated, but we think is extremely valuable,” says Cuba. The gallery’s front two rooms are dedicated to rotating shows, and are currently showcasing the work of Tom Burtonwood and Scott Ashley. “We kind of noticed a niche where there were artists like Tom and Scott who are getting a lot of notoriety in their careers, but not necessarily showing with any gallery,” adds Sabin. Ashley, Sabin’s co-worker at Perimeter Gallery, has filled the second room with both prints and sculptures. “For our first show we wanted to make sure that it was clear that we were going to be doing a lot of different things, a lot of different types of work. Like dollhouses that are being fumigated,” Sabin says. In the front room, Burtonwood, who calls himself an “old-school futurist,” is showcasing his series of color studies that emphasizes the idea of “art as a gateway” in taking its inspiration from QR codes.

Hinge itself is a gateway for Holly and Gretel, longtime residents of the Ukrainian Village, to become involved in their neighborhood in a new capacity—that of business owners. The opening was a welcoming of sorts, with local businesses donating food, beer and flowers, and hosting an afterparty. “We see potential in the future of connecting to community events,” says Cuba. “We really want to reach out and have it be a live, vibrant space.” On August 7, for example, Burtonwood is coming in to talk about his exhibition. “It’s not a one-sided ‘we’re a gallery, bring us your stuff, now go away’ kind of thing; we definitely like to maintain a conversation.” (Rachel Lazar)