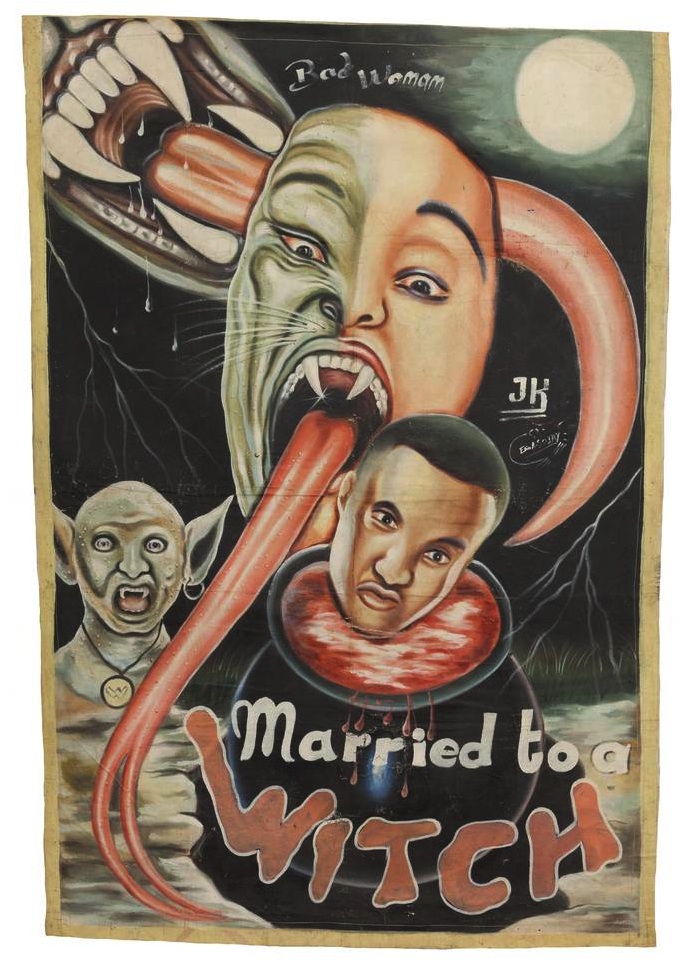 What’s charming about Nollywood (the Nigerian film industry, after Bollywood, the most prolific in the world) is that the quality of production is no greater than the quality of narrative. They work with low-rent soap operas spiced up to satisfy the West African taste for violent revenge and juju magic, and they are shot with what appears to be hand-held home-video equipment. The budget for one Hollywood blockbuster could fund nearly a thousand films made in Nollywood, so there’s some comfort in knowing that not  a lot of cash and talent has been wasted on making them.

This is also true of the hand-painted movie posters that mobile movie theaters in rural Ghana used in the 1980s to advertise their shows. Slap-dashed together on the recycled cloth of flour bags, the images are as demented, ugly and goofy as anything the Chicago Monster roster and their descendants ever made, but far less serious since the intended audience is bored adolescents of all ages rather than art collectors.

Yet, Glen Joffe, the owner of Primitive Gallery whose inventory is shown in this exhibition, is quite serious about those original intentions. As he notes on his website: “’authentic’ means used and/or intended for use by the indigenous people—and have a heart, soul and character altogether different than those made purely for sale.” One consequence is that none of the artists who painted these images are identified by name, even if they signed them. As with so many hand-crafted objects from the third world, the actual artists are kept anonymous, penniless, and with no opportunity or incentive for improvement.

The paintings envision the same violent, lurid “heart of darkness” notion of Africa that was shared by the Europeans who wanted to colonize and evangelize the continent. And yet, you can also feel that cheerful, democratic, entrepreneurial energy of the carnival, happy to exploit everyone: artists as well as audiences, and now, secondary market collectors. And who can resist entering the black tent theater that accompanies this exhibit, and watch some blood-curdling scenes from “I Married a Witch.”

With a stable democracy since 1992, a population nearly twice that of Illinois, and the world’s fastest-growing economy in 2011, surely Ghana has artists who are aiming much higher. When will their work make it to Chicago? (Chris Miller)

Through September 4 at the Chicago Cultural Center, 78 East Washington.