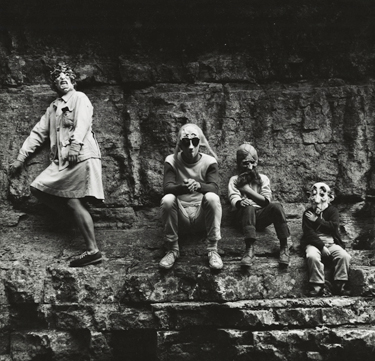 A transplant from Normal, Illinois to Lexington, Kentucky, Ralph Eugene Meatyard took up photography, got into the circle of intellectuals presided over by Wendell Berry, and indulged his proclivities for the surreal suffused with Southern gothic. An early practitioner of the contemporary scenario shot whose trajectory peaked in the 1960s, Meatyard deployed his wife and children in still dramas, in which they appeared in masks and uncovered, often with some dolls thrown in or standing alone. Curator Elizabeth Siegel is correct to dub Meatyard as “enigmatic,” judging by the fifty-one black-and-white images here. At first look, the viewer is drawn to shots like that of a little boy holding a doll and wearing an old man’s wizened face mask, sitting on cracking concrete strewn with dead leaves against the wall of a derelict building. Then one notices that most of the images are much tamer, leaving a sense of peace with what is just a form of low-key voguing—the banality of the surreal. (Michael Weinstein)

Through September 25 at the Art Institute of Chicago, 111 South Michigan.