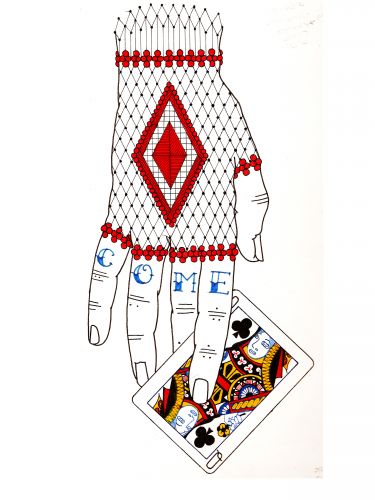 Every community, nation or subculture, in order to recognize itself, needs a multisensory sign system to serve as a shared identity archive. The growth of gay liberation from women’s liberation is poignantly set forth in the show “Underground” at Woman Made Gallery, not as an indexed historical narrative but as a contemporary cabinet of curiosities, depicting the modern world as a new Eden in which boundaries are forgotten and hybrids bloom forth in abundance. Unabashed aspirations are, as in revolutionary days of old, expressed in the monstrous, the lascivious and the absurd. Conceived in collaboration between Ruby Thorkelson, Spudnik Press and the Chicago Underground Library, the show features a gallery of striking graphic works on fabric, paper, and canvas, as well as a packed library of self-published visual and written work exploring the experience of gender (and identity more broadly), expressed in comics, illustrated journals, fanzines, cookbooks, literary collections and tracts both factual and facetious. 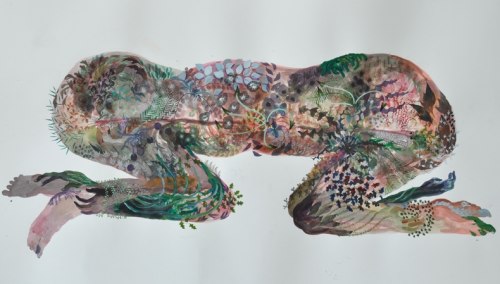 On the factual side, the gallery show includes a six-page comic on gender discrimination in the comics industry by Anne Elizabeth Moore and Esther Pearl Watson. The re-imagining of bodies is delicately rendered in fairytale illustrations by Sanya Glisic, provocative tableaux by Robin Hustle, dreamlike paintings by Megan Diddie, and fanciful portraits by Liz Born. Featured in the gallery and the library, Edie Fake’s elegant diagrams of bodies and decorations, accompanying anthemic phrases such as “COME OVER” and “STAY DEAD,” offer iconic and ironic rebuses of identity, as do Lee Relvas’ embroideries of oil spills, black-thread-on-black-silk mandalas which, with a similar enigmatic pathos, announce things like “ANCIENT SEEPS INTO FUTURE.”

Perhaps by political necessity this is a highly inclusive show, and so the quality fluctuates, but the overall exuberance makes for a memorable experience.  There will be a reading in the space on Sunday, August 14, featuring words as well as music presented by artists and writers in the exhibition. (Bert Stabler)

Through August 18 at Woman Made Gallery, 685 North Milwaukee.