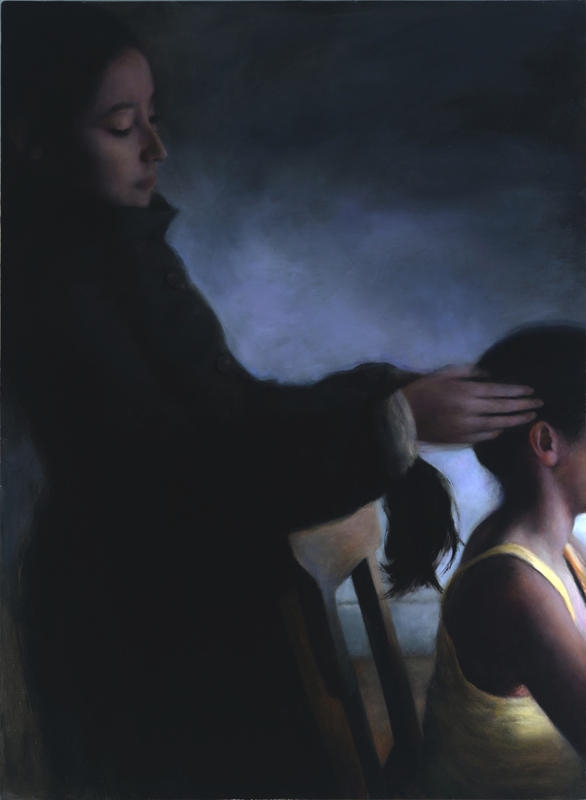 Representational accuracy is a severe challenge to pictorial composition that usually results in the prosaic rather than the poetic. There are plenty of textbooks on perspective and anatomy, but passionate sensitivity seems to be a rare, unsolicited gift from the gods. So rare that when it happens, a painting screams for attention, as the work of Elsa Muñoz did when noticed by distinguished Chicago painter Marcos Raya in 2009 at the now-defunct Around the Coyote art fair. Raya introduced her to the Dubhe Carreño Gallery, which gave her a show the following summer. That show was seen by Cesáreo Moreno, visual arts director of the National Museum of Mexican Art, and he gave her a six-month one-person show this summer. Isn’t that the way an art community is supposed to work? And all this began just three years after Muñoz got a bachelor’s degree from the American Academy of Art, which is mostly known as a commercial art school.

Encouraged by this attention, Muñoz has filled the museum’s Kraft Gallery with twelve oil paintings, all but one of which were painted in the five months before the show opened. What makes her so special? Some of it is deft touch, most obvious in her nocturnal scenes of tropical foliage since those touches are so few and so dramatic. And some of it is her sense of human form that is strong but not stiff, full but not puffy, casual but not limp. But overall, it’s a vision that borrows heavily from the Spanish Baroque, though more gentle, less somber, in a world that feels both profound and elegant, but also accessible. Where Zurbarán would paint Christ suffering on his cross, Muñoz paints the pattern of crosses made by the wooden beams that support a typical stack of Chicago back porches. Where Velasquez paints either aristocrats or peasants, Muñoz paints young women like herself, from the neighborhood.

There is a feeling in some of these paintings that they have not completely escaped the limitations of the photographic material on which they seem to have been based. The unframed, slick surfaces of her panels sometimes resemble photographic prints, but the artist’s sense of form and design is so strong, and her ambition so great, that that feeling might well disappear by her next show. In the right hands, brush and paint can be so much more expressive than lens and pixel. Elsa Muñoz has got them. (Chris Miller)

Through November 27 at the National Museum of Mexican Art, 1852 West 19th Street