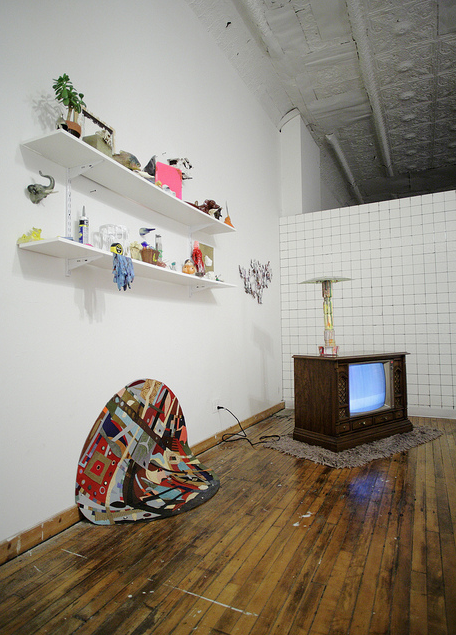 The uncanny potential of domestic objects is key to the art-world appeal of Steven Spielberg’s 1982 sitcomesque horror classic “Poltergeist.” Twenty years later, Paul Pfeiffer’s series of sculptures by that name recreated the tower of chairs stacked on the kitchen table by Spielberg’s ghost. In “Renovation Creep,” Antena gallery’s current show, Daniel Bruttig, Joseph Cassan and Erin Thurlow remake the gallery as a dysfunctional domestic environment of desiccated ephemera (perhaps a foreclosed hoarder home) similarly inhabited by ambient menace. Echoing the Reagan-era TV through whose static the ghosts communicate in the film, a hulking monitor encased in veneer and sitting on a mat of lush pile plays Bruttig’s “Carpet Master,” a video featuring black-and-white carpet textures. One delicately painted stain on the wall evokes an absent staircase, and another suggests recently removed tile. Atop sits Bruttig’s “Glass Stack,” a precarious nonsensical tower of jars, dripping rainbow hues like a psychedelic candle and topped by a casserole dish and a marble. Jagged shards of glass protrude upwards from various sculptures, some painted as trompe-l’oeil mirrors. One such piece sits on a set of shelves adorned with a jumble of colorful ceramic agglomerations and scary assemblages, like embellished models of predatory animals and green fangs glued to a decaying shingle glued to a mirror. On the floor below is a single spray-painted fuzzy slipper, standing en pointe. Nearby sits Cassan’s “Untitled (Box),” a white cube around which snake numerous white cords, one fused into the wall. And in Thurlow’s photo series titled “Poltergeist,” power cords and power strips are plugged into themselves, and a Post-It note on a refrigerator reads “Gone to the other side”… backwards. Vladimir Nabokov’s “Terra Incognita” isn’t a ghost story, but, as in “Renovation Creep,” the evil feels internal, arising from memories of dread and repulsion rather than a fear of invasion. As Nabokov’s protagonist succumbs to illness, the jungle in which he is expiring dissolves, and he starts to see fevered glimpses of a European bedroom—or, as he puts it, “the furnished rooms of nonexistence.” (Bert Stabler)

Through September 3 at Antena, 1765 South Laflin