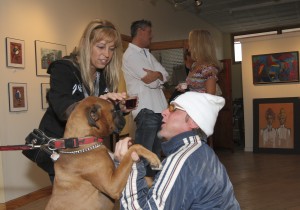 “It’s an eclectic good time,” says Charlie Rees, a member of the Flat Iron Artists’ Association (FIAA) and an organizer for this year’s Coyote Art Festival. In its second year, Coyote will bring more than 140 artists of everything from music to poetry to visual arts to Chicago’s Near Northwest Side.

Wicker Park/Bucktown used to be the home to the Around the Coyote festival and arts organization, which would draw thousands of visitors yearly for a weekend festival in September. The organization eventually chose to leave their home neighborhood and hold a more curated event, but shortly after making the change both organization and festival disappeared. A few years later, the FIAA decided to start their festival borrowing the Coyote name, one that returned to the original idea of a neighborhood-based, uncurated event.

The FIAA makes an effort to ensure all serious artists can participate, whether well-known professionals or enthusiastic students. “We don’t want to become curators,” Rees says, “because that’s really not our background. We’re artists.” It also helps engage the entire neighborhood in the project and draw in more visitors. The mission of the FIAA is to promote the art, the artists and the building, and the Coyote festival is a perfect way to do so while helping to establish Wicker Park/Bucktown as a center for the arts in Chicago. “The point is really to come out, meet with the artists, enjoy the art, and experience the neighborhood,” Rees says. (Erin Kelsey)