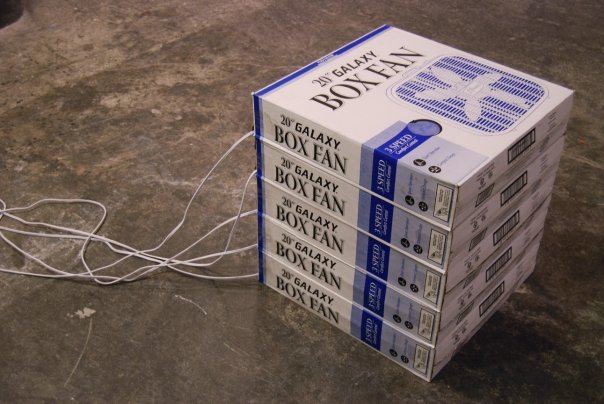 It’s been over six years since Brandon Alvendia and Caleb Lyons put together a Spring Break-themed art show at the Butcher Shop Gallery, a cavernous warehouse on Lake Street, now closed. Featuring over fifty artists (including me), it was primarily and ultimately a formidable bacchanal. Alvendia, who was giving out stenciled spray-tans, was again present for another iteration of the gallery beach party, again in a cavernous warehouse right by Lake Street.

The coherence of this show at The Hills set it apart from the earlier one, while making me think of the theatrically elongated shadow Ed Ruscha has cast over “party art.” Alec Regan’s horizontal stack of box fans turned on and then resealed in their boxes evoke Jeff Koons, Kate Ruggeri and Carson Fisk-Vittori’s fern stuffed into a basketball hoop might suggest David Hammons, and Winslow Smith’s videos of art and design museum displays composited with dancing feet and sunset vistas could be chalked up to institutional critique. But Jesse Butcher’s (again) sunset vista postcards announcing “Life’s A Beach Timeshare,” Alex Chitty’s vibrantly blurred photographic prints, Josh Reames and Amber Thomas’ sparkling molded glitter-sand canvas, complete with shells and cast-off Splenda packet, and Ben Foch’s installation with hanging yellow Frisbee (as sun), striped beach chair with matching striped canvas, and (again) printed postcards, left no doubt. The east-coast Pop adulation of graphics and celebrity was in many ways overpowered by Ruscha’s amazing formal juxtapositions, uncanny koans, and subtle hints at anarchy. Perhaps Chicago has always wanted to borrow some of that castrating firepower—hinted at in Amber Thomas’ sculpture of a sawed board folded over to painfully squeeze an inflated beach ball, Richard Serra-style.

The enigmatic subtitle of the show was “Forbidden Pair of Dice (The Final Chapter).” There was definitely some kind of important dice game going on at the bar, featuring, I’m pretty sure, altered dice. I didn’t bother to find out more—after all, as Ruscha said: “Art has to be something that makes you scratch your head.” (Bert Stabler)