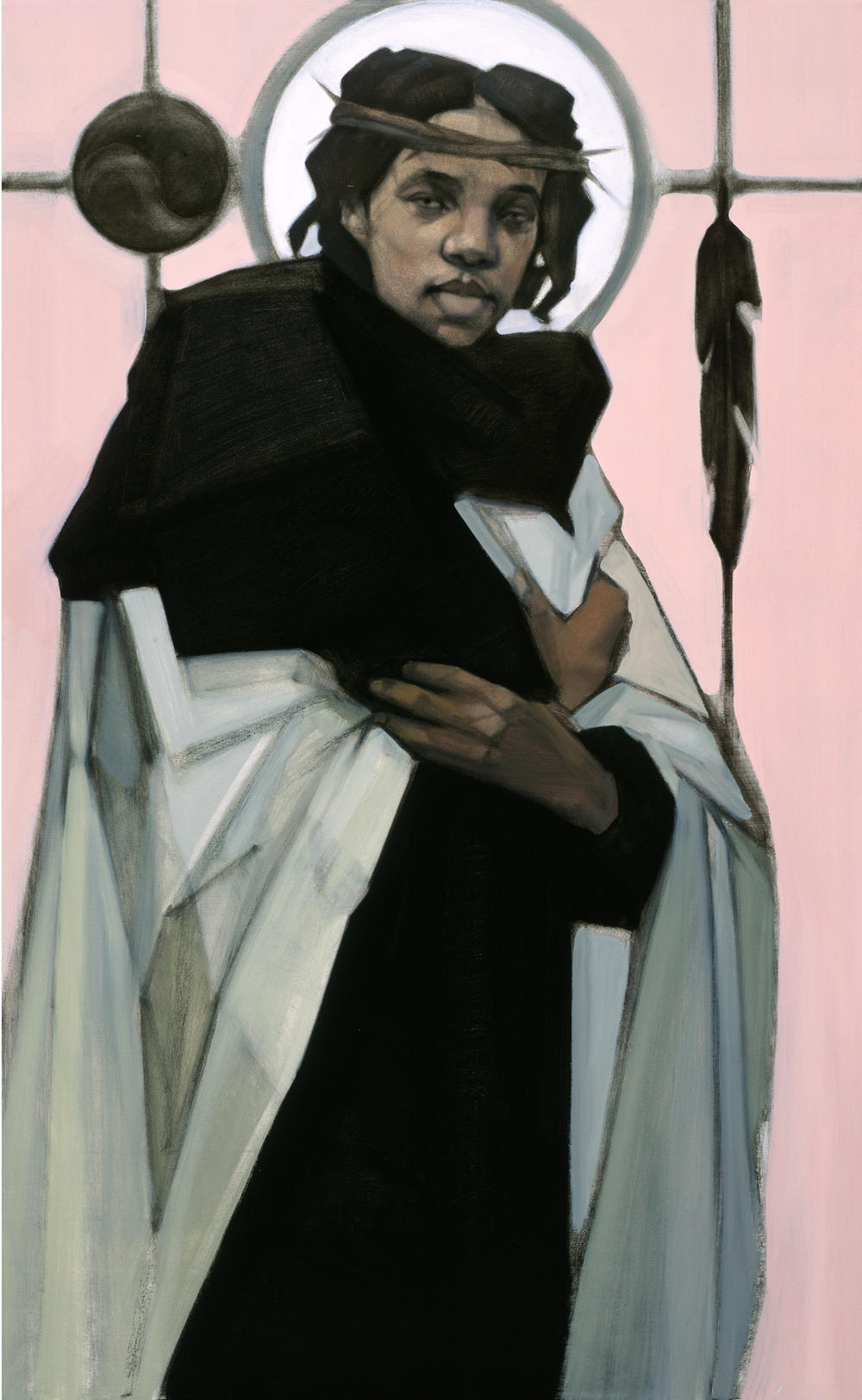 In 1999, Janet McKenzie’s “Jesus of the People” was selected by Sister Wendy Beckett, the BBC television art docent, from among the ten finalists in the National Catholic Reporter’s “Jesus 2000” project to discover “who Jesus might be for our time.” As Sister Wendy wrote: “This is a haunting image of a peasant Jesus—dark, thick-lipped, looking out on us with ineffable dignity, with sadness but with confidence.”

Using a young African-American woman as the model and symbols associated with American Indian and Taoist spirituality, the piece has generated more controversy than veneration, which was presumably that independent newspaper’s intention.

Now McKenzie’s work has traveled to Chicago in an exhibition titled “Holiness and the Feminine Spirit,” including the Jesus of the People and twenty additional pieces that continue to work the themes of racial and gender identity. What if Mary were black but baby Jesus were white? What if a tall, black male angel protected a young white girl?

Beyond these speculations, the work is rather tame, resembling the effeminate Victorian style found in the stained-glass windows of so many late-nineteenth-century American churches. This is a comforting, forgiving Christianity, quite far removed from the histrionics of the Baroque, the narrative power of the early Renaissance, or the profound mystery of the Byzantine. Its iconic quality seems more appropriate for tarot cards than religious shrines, and without the luminosity of so much great Christian painting, it shares the flat, graphic qualities of the fashion illustration in which McKenzie was trained. Curiously, the eyes of most of the figures are shut,  as they look not out at the viewer or each other, but only within. Much like the artist herself who says, “when I say I don’t feel I have to look for God or Jesus, I have a feeling that the essence of Jesus is inside me, with me!”

But whatever its distance from Christian institutions and the art they commissioned, her imagery still shares the radical social philosophy of the biblical Jesus who taught that the last shall be first in the kingdom of Heaven. McKenzie’s figures have a dignity that has nothing to do with social status, which is not a bad message in an era when economic distinctions are becoming ever more pronounced. (Chris Miller)

Through October 23 at the Loyola University Museum of Art, 820 North Michigan