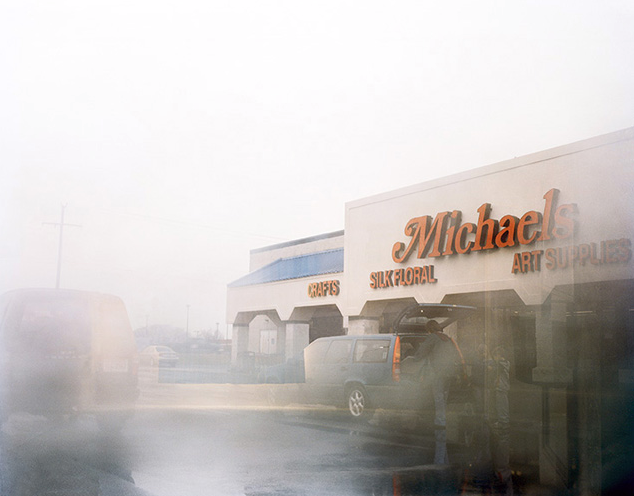 Back in 2002, John Allen Muhammad, the “Washington Sniper,” captivated the country through his brief months of infamy as he made his way with his young accomplice Lee Boyd Malvo on a long and winding road from Washington state, through the Southwest and Deep South, to Maryland and Washington, D.C. gunning down twenty-seven random victims with his rifle. In 2005, photographer Joel W. Fisher retraced Muhammad’s journey, shooting with his camera the depopulated sites of the killer’s deeds. Leaving aside motive and meaning, Fisher relentlessly focused on his emotional response to the events, coming up with a penetrating series of muted and ominous color shots that convey the same sense of the dull, disquieting tedium that sometimes takes over ordinary places, particularly on an overcast day in the autumn, whether we are out west, down south, or on the East Coast. Fisher conveys his sensibility most precisely when he is helped by a fog in his photo of the parking lot of a Michaels craft store that is as murky as any of Jack the Ripper’s haunts. Evil can transpire anytime and anywhere, and at random, and Fisher shows us that it will make us feel the oppression of a dark fall day. (Michael Weinstein)