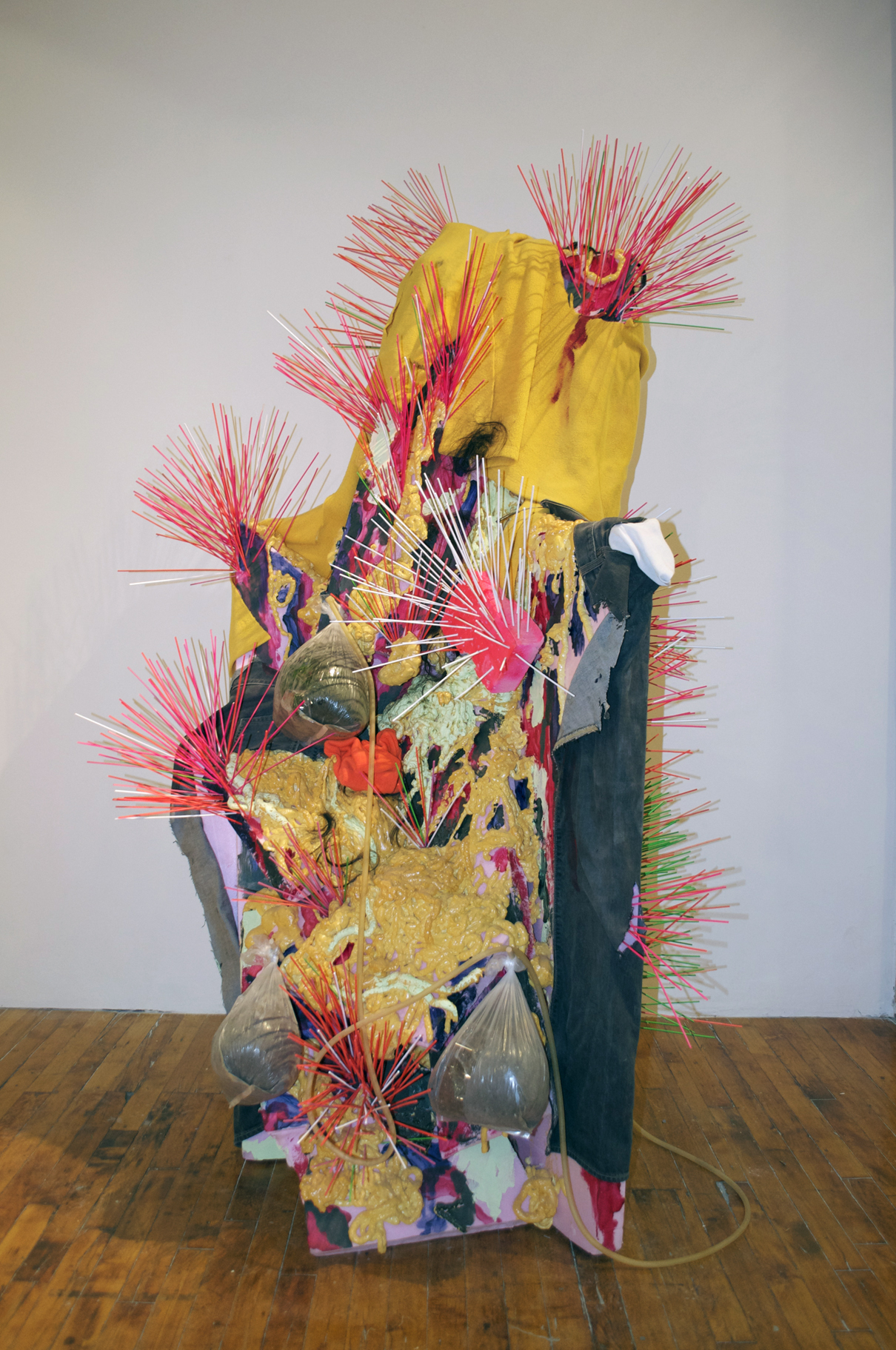 Zachary Cahill’s über-conceptual installation at Threewalls is only a partial representation of the artist’s long-term project: his satirical, and inevitably impossible, efforts to found an orphanage on Chicago’s South Side, along with vivid imaginings and permutations of said orphanage explored through seemingly limitless media. The project’s scope as a whole is so big that the word “conceit” seems too understated to encapsulate what Cahill is up to; even a long, dense exhibition essay by Joan Copjec herself, citing everyone from Bourdieu and Lacan to Newt Gingrich, and interweaving arguments about late capitalism and the relationship between museums and orphanages, seems dissatisfied with its own encapsulation with the project. The exhibition, “USSA 2012: The Orphanage Project,” according to only some of the available literature about the show, is rooted in or speaks to notions of art’s use-value, relational aesthetics, 1990s neo-conservatism, various branches of neo-Marxism, governmentality, and the model of the art exhibition itself, all embodied in an overwhelming mass of pseudo-documentation and mixed-media installation riffing off this fictional hyper-institutional orphanage. 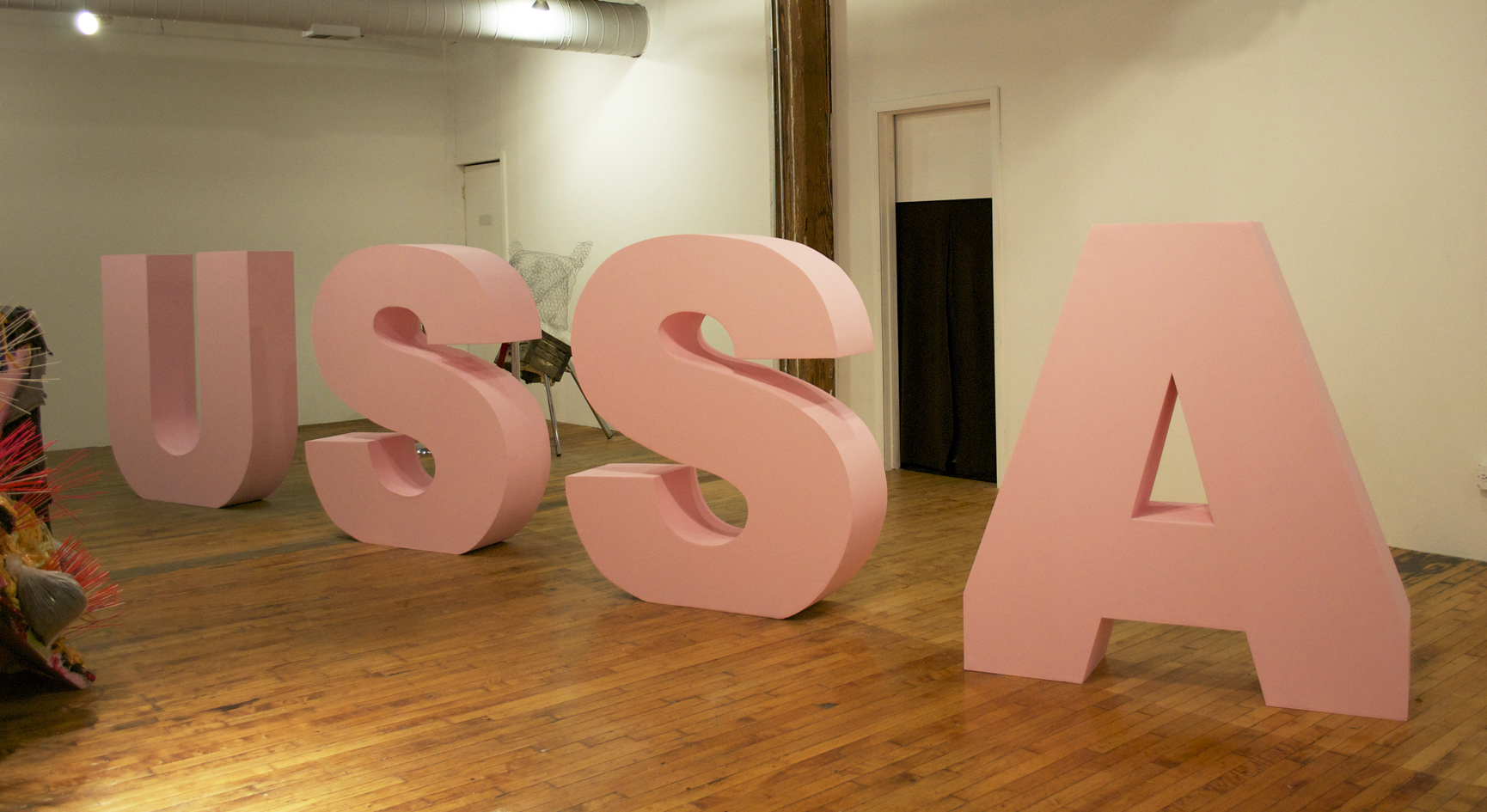 But if the word “conceit” is too minor for what exactly the concept of the orphanage is doing for Cahill, his solo show necessarily reduces the project to several interlocking conceits, tropes and images that don’t cohere on their own, intentionally or otherwise. The show’s elements are discombobulating: sketches and diary-like notes from the imaginary orphanage line the walls, combined with garish sculpture and a room-turned-cave with heavy doorflaps, chicken-wire stalagmites and a video of the artist exploring a wall with his mouth. An unexplained bear motif dominates the show’s imagery, notably in a hilarious sculpture resembling a 3D topographical map of a bearskin rug. The meaning of the show would seem to lie in trying to make sense of propaganda posters, sketches of bears and people captioned with sad truisms, and sculptures formed by kitschy objects like plastic Christmas trees, Pepto Bismol-pink letters spelling out USSA. And this is where it gets tricky to judge the show, because unless you’re willing to do the research—listening to Cahill’s interviews, reading the literature, figuring out an intellectual narrative to tie together the disparate elements of the show—it’s going to be hard to find much more than darkly absurdist, dream-logic humor here. 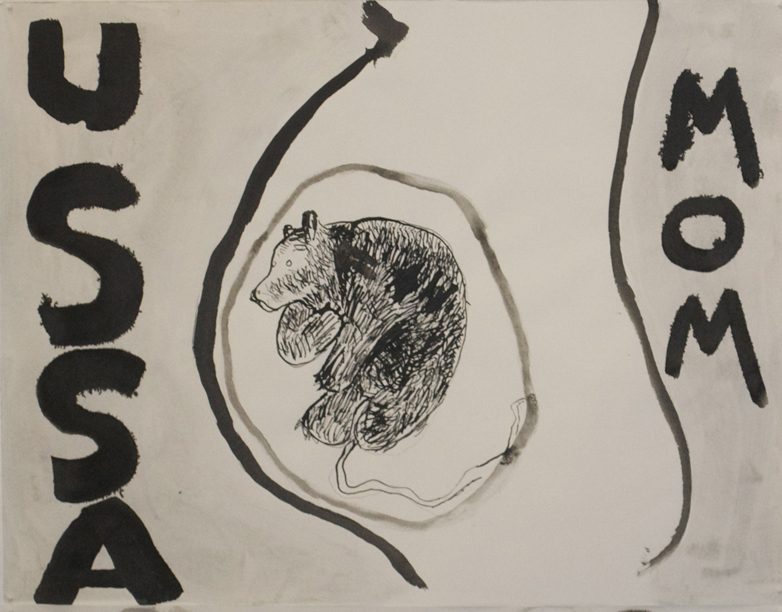 But if the research and making-sense process here is carried through, “USSA 2012” turns out to be deeply illuminating, playing with our notions of what a gallery show should do, the kinds of conversations it should provoke, the work the audience should do in coming into contact with the work. The fact that Threewalls only begins to contain Cahill’s project is another inevitable impossibility that creates a sense of excess that’s exciting and moving, and raises questions about the suitability of the art project itself for the gallery space. Of course, the gallery turns out to be yet another kind of orphanage, and of course, the artist’s intentional frustration is that of a pseudo-parent: in the photocopied book of sketches distributed at the exhibition, the last page declares: “To disclose the amount of control would be to disclose something like the face of love.” (Monica Westin)

Through October 15 at Threewalls, 119 North Peoria

[…] to encapsulate the show, as I wrote for my New City review, quickly became extremely difficult because the project’s scope as a whole is so big; the […]