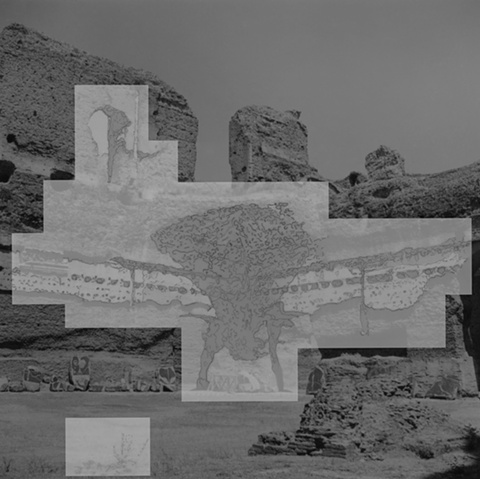 Born in Cuba, Maria Martinez-Canas was taken by her parents as an infant to Puerto Rico and is now a Cuban-American photo-artist who has spent her sentimental and artistic life attempting to recreate in images the native home she never had. Having been preoccupied with cultural displacement and now middle-aged, Martinez-Canas is confronting her family history and finds that she cannot easily disentangle fantasy from reality. Rather than resolving her doubts, Martinez-Canas has depicted them in complex and elegantly produced photo-works, in which she lays a base of photographs (reality) and then overlays them with tracings of other photographs, segmenting the composition and presenting it in faded, misty, dreamy black and white. In her most evocative image, a naked girl, partly photographed and partly traced, sits pensively and sadly on rocky ground as an indistinct passerby in the background seems to stare blankly at her. You can’t go home again, especially when it never was. (Michael Weinstein)