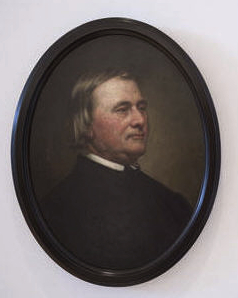 In 1996, the Museum of Contemporary Art celebrated the opening of its formidable new building with “Art in Chicago 1945-1995,” an epic survey whose catalog served as the first comprehensive history of Chicago art. Fifteen years later, with the opening of a more modest facility at DePaul University, Chicago art is once again being celebrated, but in a very different way. Rather than attempting to establish a canon of Chicago art, museum director Louise Lincoln has asked forty-one people she happens to know—scholars, colleagues, collectors, art critics and others—to pick a Chicago artist who “is famous, used to be famous, or ought to be famous.” Often, they picked the latter.

For example, Franz Schulze picked George Healy (1813-1894). Schulze may best be known as the critic who coined the term “Chicago Imagists,” but for this show he picked a prolific, French-trained, academic painter who traveled the world making portraits of famous men in that hard, stiff style that the Impressionists were so eager to abandon. No wonder his work is now more likely found in museums of history rather than art.

Moving into a later generation, art historian Kirsten Jensen picked Arthur B. Davies (1863-1928). Though not known as a Chicagoan, he did spend almost ten years here and was featured in a 1911 solo exhibit at the Art Institute of Chicago, which acquired many of his paintings, including this one. Recently, however, this delightful nude, as well as many others, have been sold at auction, presumably because they do not fit into the triumphant narrative of Modernism.

From the early twentieth-century, Tim Samuelson, Cultural Historian of the City of Chicago, picked Margaret Iannelli (1893-1967), a graphic designer whose career was eclipsed by that of her husband, Alfonso. It’s good to see a pioneering American woman artist finally getting her due, but regretfully this example, the cover to a 1916 children’s book, is not very inspiring.

In the postwar era, more of the usual suspects are represented, but there are still quite a few surprises, like Tim Anderson, a portrait painter, whom Corey Postiglione, associate professor at Columbia College, has called “arguably one of the best portrait artists working today.” Really? I would disagree, but that’s the fun of this exhibition. There are plenty of glaring omissions (no landscapes, no video, no cartoonists), and odd choices placed beside text that justifies them. And maybe that free-swinging, anything goes attitude is what art in Chicago is all about anyway. (Chris Miller)

Through March 4 at the DePaul Art Museum, 935 West Fullerton.

Actually there was a Chris Ware piece in the hallway, but it was easy to miss.