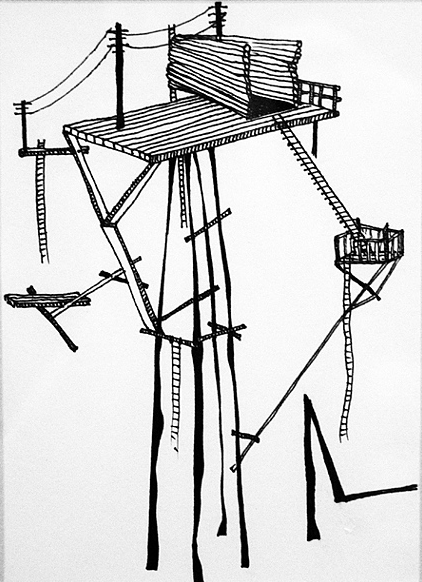 As fiber-based artists Amy Honchell and Young Cho reveal in statements about their respective practices, their works are shot through with personal meanings and associations: Honchell recalls the mountainous Pennsylvania landscapes of her childhood, and Cho elaborates an intimate mythology revolving around a recurring imaginary character. But the private origins of the pieces in “Fictional Landscapes,” now up at Dominican University’s O’Connor Gallery, are given over to something immediately accessible to viewers, thanks in part to the manner in which both artists use narrative elements to solicit audience engagement.

In one series of drawings, Honchell creates studies in postindustrial abstraction that exhibit an insectile elegance, the dark lineaments of skeletal machineries contrasting with brightly colored backgrounds. “Murmur, Sigh, Whisper,” meanwhile, is a sophisticated gesture of childhood delight in which the artist shapes ultrafine glitter into a scintillating hill topped by an ethereal structure—a dreamy vision of shimmering, granular materiality. Cho’s precisely rendered pencil drawings are spare, delicate and minutely detailed. The childlike figure that inhabits them—an intimidated everyman whose face is always hidden—engages in private rituals of loneliness against a vacuous white background. 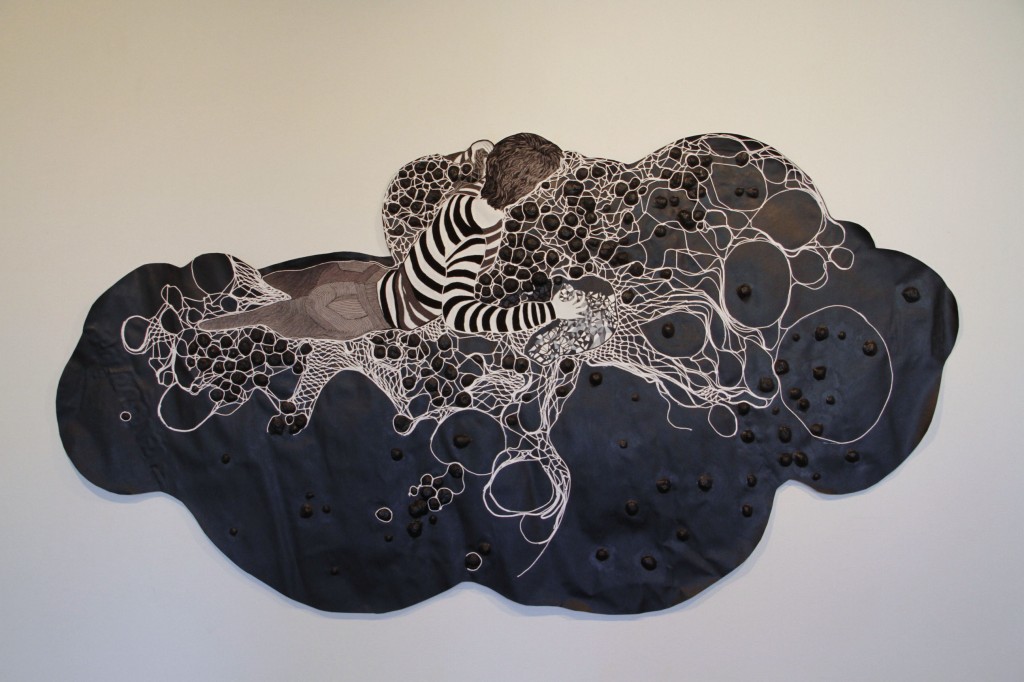 Both Honchell and Cho bring drawings off the flat surface and into three dimensions, with consistently compelling results. Honchell’s installations evoke the drawn line in their conflation of geological strata, muscular striations and fleshy creases. Composed of layers of donated cloth “built up under a stitched/drawn surface,” Honchell’s soft sculptures flow, purl, press and rumple, with unsutured edges allowing glimpses of the multifarious colors and patterns within. Honchell’s landscapes also recall interior organs, with tunnels doubling as orifices. Amidst the soft mountainous terrain are sparse and spindly industrial structures. These allusions to industry reflect not only Honchell’s investigation into manual labor but also her interest in bringing insides out; the coal mines conjured in these pieces recall the excavation that Honchell pursues in exploring the geographies of her past. Cho’s deftly constructed multimedia wall-hangings are less excavations than fabrications. In “Harbor,” Cho’s everyman is facedown in a frothy morass that appears both terrifying and comforting—a kind of inner space where the character sinks into black waters emanating from his own head. “Cross Section II” is a wildly textured womblike canvas containing nude figures with bubbly skins, at once alien and affable.

Deeply personal but never insular, the works in this show turn intimate origins into the basis for experiments in shared narratives. Honchell’s unpeopled geographies invite inhabitation, while Cho’s lonely archetype solicits identification. The artists’ works complement each other marvelously, their juxtaposition bringing into relief a variety of techniques and materials for turning interior landscapes into palpable fictions. (Jeremy Biles)

[…] realm of contemporary art. Its current exhibition, Fictional Landscapes, is a recommended show by NewCity Art, an accolade among many about the exhibition and about O’Connor Art Gallery in general, a space […]