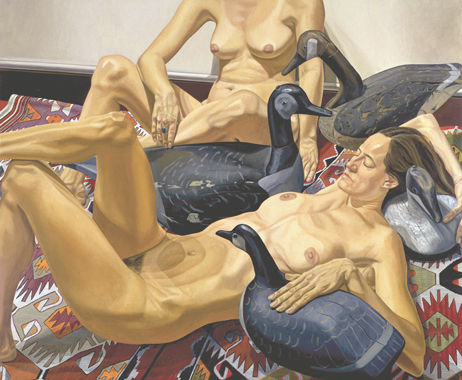 What do the objects in a painting mean? This is a very important question for historians who study art made for the sake of religious or political ideologies. But when art is done for the sake of art, success often depends on what they don’t mean, especially in the post-war American art world that reacted so strongly against the idealism that accompanied two world wars. Philip Pearlstein (born 1924) and Ellen Lanyon (born 1926) are two artists, and friends, whose careers emerged at the beginning of that era, and their contrasting strategies for an engaging meaninglessness are currently facing each other on opposite walls at Valerie Carberry Gallery.

It’s an enjoyable contrast. Pearlstein’s work is heroic in size and effect, with huge nudes in awkward poses and dramatic compositions made even more lively by brilliantly patterned carpets and various curious objects culled from his extensive collection of Americana. The models appear so bored and the space so bright, clean and uncomfortable that each scenario feels like the waiting room of a hospital clinic. Lanyon’s scenes feel more intimate and domestic, like a trip to the attic where old forgotten objects come to life in a child’s imagination on a rainy afternoon. Whether impersonal or intimate, both artists celebrate the joys of boredom. 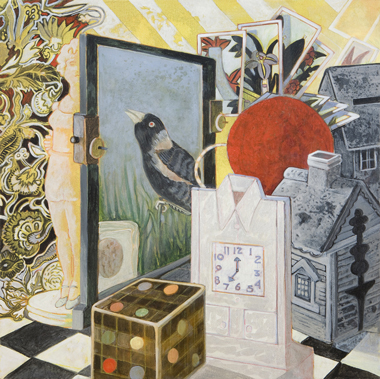 It was the artists themselves who made this show happen, selecting each other’s works in recognition of their long friendship and mutual interest in collecting junk from flea markets. Pearlstein is always looking for what might go into a painting, while Lanyon searches for what might start one. It’s all explained in a fascinating interview in the exhibition’s catalog that reveals so much about their careers and training. Pearlstein would have remained an abstract expressionist except that “you had to be having a nervous breakdown to be truthfully expressing something,” while Lanyon’s art history class with Kathleen Blackshear at the AIC “got to Romanesque, and then she said, ‘Now we’ll talk about Cezanne.’”

As Pearlstein says about the objects he depicts, they were selected only for their abstract qualities. “I was just setting up puzzles for future art historians,” while Lanyon’s juxtapositions “create some private message—a scenario left for the viewer’s speculation.” Neither has any interest in the kind of form and pictorial space that was developed in the Renaissance. But still, their images are lively and demand attention, and a tribute to the vigorous maturity of two artists still working into their seventies and eighties. (Chris Miller)