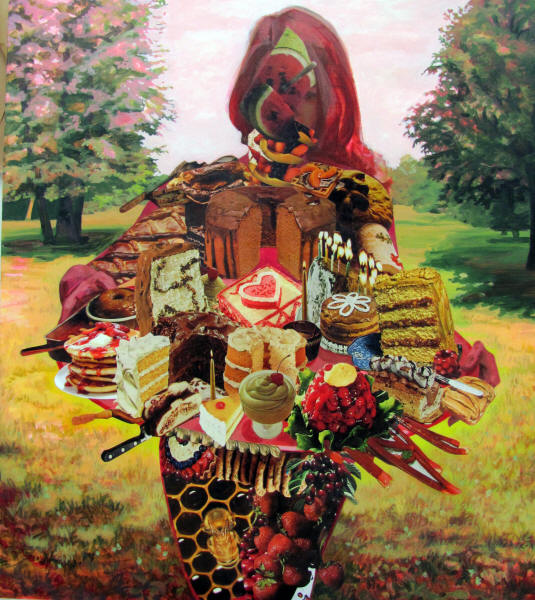 Parents often show love by giving us too many things, so even after we’ve grown older, nothing can be quite so comforting as the clutter of useless junk. And unlike everything that’s always changing, clutter can be permanent and reliable. Which may explain Mary Lou Zelazny’s pictorial world, where, as the “Cake Lady” herself, she offers up an armful of comfort food. We all know that the manufactured pastry, whose garish advertising images she has cut and pasted, is not very healthy, so one might conclude that she is also offering up a pointed critique of modern American life. But if eating chocolate cake makes you feel good about yourself, why stop? And feeling good about yourself seems to be this artist’s mission, especially in this exhibit of recent paintings that focus so often on the female face and body, not so much how it looks on the outside, but how it feels from within. 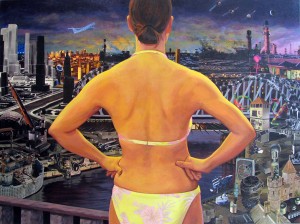 Rather than self-portraits, Zelazny presents images of “me.” Some of them are fantasies, like the party boat full of showoff pinup girls, or the ballroom full of coy, attractive women who are more interested in themselves than their sometime Neanderthal partners. And some of them, like the split-face personalities, seem all too real. But most impressive is the strong, confident woman, “Made of Iron,” who, dressed only in her bra and panties, faces off against the urban techno-jungle that has been depicted so effectively by a seamless collage technique.

Zelazny’s amazing ability to compose a maddening pastiche of details brings to mind the masterpieces of Brueghel, even if her details have been cut and pasted instead of painted outright. She also pastes in fragments of her own decorative brushwork, building up a surface that is too gorgeous and intense to escape. The world outside her paintings is so dull and ordinary by comparison. She offers the giddy, intense, but somewhat limited world of a happy American teenage girl. Why would anyone want to grow out of it?

That stubborn insistence on living in your own happy world is probably why Zelazny can be found in a gallery that primarily shows outsider artists, even if her work is so indebted to twentieth-century surrealism. She may borrow some of its pictorial elements, but she is not primarily concerned with our deeply flawed, irrational world. She’d much rather live in her own. (Chris Miller)