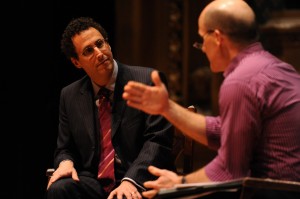 There are few words in either the arts or academia that are used as often, and occasionally mean so little, as “interdisciplinary.” The overwhelming surge in interdisciplinary work over the past decade ranges from a variety of motivations and understandings of what exactly it is and should do. At best, this work combines the expertise of several areas to solve important problems or shed light on complex issues better than any one perspective or discipline could. But there’s often a dubious quality of work claiming to be interdisciplinary—its success can be difficult to judge (the peer review system, for example, falls apart on the academic end of things), methods and standards between disciplines differ, and the broadness of perspective can result in vagueness and inconsistency. In the arts, interdisciplinary work can especially fall into chaos as the perspective and conversations within the various disciplines involved can get muddled and idiolects misunderstood.

The general consensus has recently seemed to be that we ought to work to create more coherent and coordinated work within this type of holistic undertaking, from clearly defined problems to consistent methodologies and narrow focus. Which is why, when I sat down with David Levin, the director of the University of Chicago’s new Richard and Mary L. Gray Center for Arts and Inquiry, I was surprised and even disarmed to hear that his approach to running the fellowship program for visiting artists and scholars at the Gray Center (supported through a $1.35 million Mellon grant) is to stay out of their way. “Look,” Levin murmurs, excitedly but gently, as he often begins his sentences, “the thought is that the pairings between scholars and fellows we’ve set up will have a truly transformative effect on both their work, but it will take awhile to know. I’m not going around banging on their doors asking to see what they’ve produced.”

The Gray Center, it seems, will be much less about predictability and pre-determined research than a hands-off approach from the Center toward the fellows and projects they facilitate. And these projects are nothing if not ambitious; to fulfill the Center’s goals of “enhancing education, promoting collaboration, and fostering creative innovation at the intersection of academic inquiry and artistic practice” the fellowship pairings are notable both for the scope of the projects and the pairings between Fellows and University faculty that seem to be more about real collaboration than a fancy residency.

This year, Fellow Alison Bechdel (most famous for her comic strip “Dykes to Watch Out For”) will be working with English professor and graphic novel scholar Hillary Chute to try to create a new language for talking about comics in both theory and practice. Avant-garde architect James Carpenter, who works on the relationship between light and structures, will work with physicist Sidney Nagel on the aesthetics of light. And the list goes on.

Levin, who is a professor in the Department of Germanic Studies, Cinema & Media Studies and Theater & Performance Studies, and whose specialties include the intersections of cinema, theater and opera, is especially aware of the risk and potential for failure involved in ambitious, freeform interdisciplinary work. 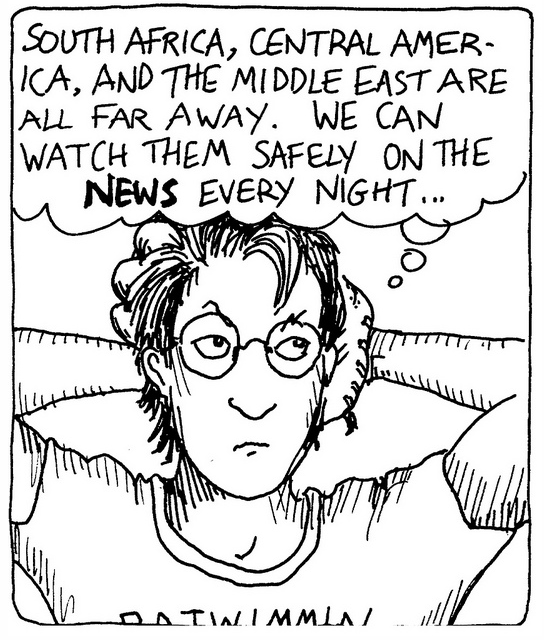 Artwork by Alison Bechdel, a fellow at The Gray Center

“What we’re ultimately trying to do is ideally developing a new language with each pairing, along with a new language to talk about these languages, and even a new language to figure out what constitutes success and failure in this kind of work,” says Levin. There will be a conference every year at the Center, and Levin wants one of the first conferences to be about “failure and rhetorics of failure in the academy and the arts, capitalizing on what constitutes failure in these worlds where we’re deeply invested in it.” Being invested in real risk in academic and aesthetic inquiry—with the possibility of failure—is a luxury that the University of Chicago has during a time when most people in both fields are trying to find footholds, and at best will be a gift and model of what one might do if one thinks bigger.

But even more remarkable than the ambition and investment in risk is how deeply these visiting artists will be involved in academic departments, with no ghettoization. For example, Tony Kushner, who will be collaborating at Court Theatre this year, will not just be involved in the production of “Angels in America” there this winter; he’s also here having extended conversations with faculty throughout the University about future projects. This incubator, as opposed to tourist, model of the residency, is just as central a part of UChicago’s model for brave new interdisciplinary work: creating interstices between arts and academia, and theory itself, as well as between disciplines. “U of C’s profile is particularly well-suited to interdisciplinary work… professors and students should go wherever their inquiry takes them, and we’ve long supported that,” Levin notes carefully. “As a result, we’re less focused on addressing, say, intractable boundaries between disciplines. Ideally, in ten years, we’ll look back and think—wow, we had this person at this moment and they did this thing here.”