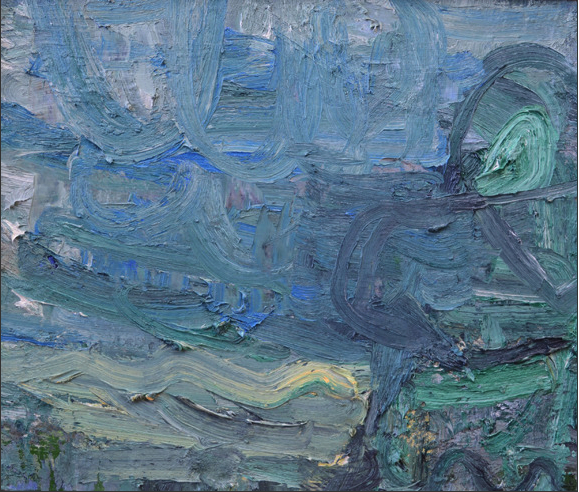 In 1845, J.M.W. Turner reportedly joked: “Indistinctness is my fault,” in response to an American collector who despaired finding many recognizable details in one of his atmospheric seascapes. In some of his magnificent swirls, nothing was recognizable at all. Was Turner an early Abstract Expressionist? Not if you distinguish the epic struggle of man against nature from the psychological struggle of self against the world. Curiously enough, a similar Romanticism has recently emerged simultaneously in the work of two painters now exhibiting work in adjoining galleries at 835 West Washington.

John Santoro’s previous paintings seemed more intimate and closer to home. His recent oils still invoke earth, sea and sky, and sometimes even his own backyard, but now greater powers are involved, as recognized by titles like “Mrs. Moby Dick” and “Godzilla Sock Puppet.” As this deprecatory humor might suggest, the artist was himself surprised by all this sturm und drang, even as he carefully composed each delicious gob of thick paint, and he is a wonderfully precise composer. Santoro seems to be mostly intrigued by setting and resolving formal challenges, as he obviously did with multiple variations of “Path to the Pool.” Then he just lets the final effects be whatever they may. 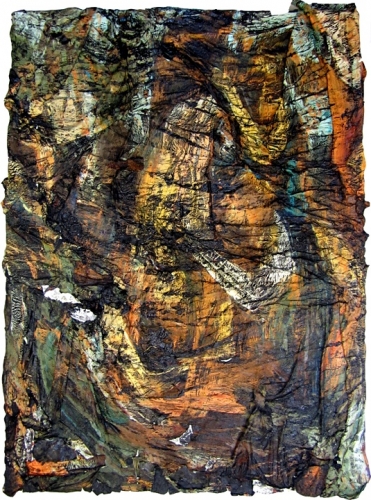 Angel Otero has also moved from the personal to the cosmic. His 2010 show at the Cultural Center was filled with still-lifes nostalgically recalling his youth in Puerto Rico.  Now, after moving to New York, his canvas is not only ten times larger, but it’s no longer stretched on its frame. It’s more like the flayed hide of some wondrous beast that’s been draped over the frame like a trophy. Yet for all the apparently random folds in canvas and paint skin, the results still feel like the carefully designed, and beautiful, setting for some kind of heroic deed. And most remarkable is the crushing silence in the gallery. How can the room remain so quiet with all this drama on the walls?

This Romantic revival may be only one small corner of a wildly diverse art world, but it certainly is inspiring to see paintings that seem to be settings for heroic human deeds—even if a human figure can’t be found in any of them. (Chris Miller)