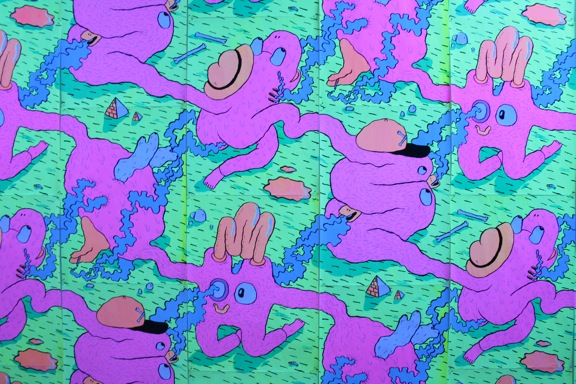 In talking about the “Drunk Vs. Stoned” exhibits that Scott Reeder and the General Store in Milwaukee put on at Gavin Brown’s Passerby space in New York in the mid-oughts, art critic Ken Johnson said that while “drunk art” is “impulsive, active, aggressive,” stoned art, on the other hand, “tends to be introverted, tends to focus on details, tends to be repetitive.” The companion psychedelic shows now at the Hyde Park Art Center, curated by Chris Kerr and Paul Nudd, blow away any such clear symptomatic distinctions. 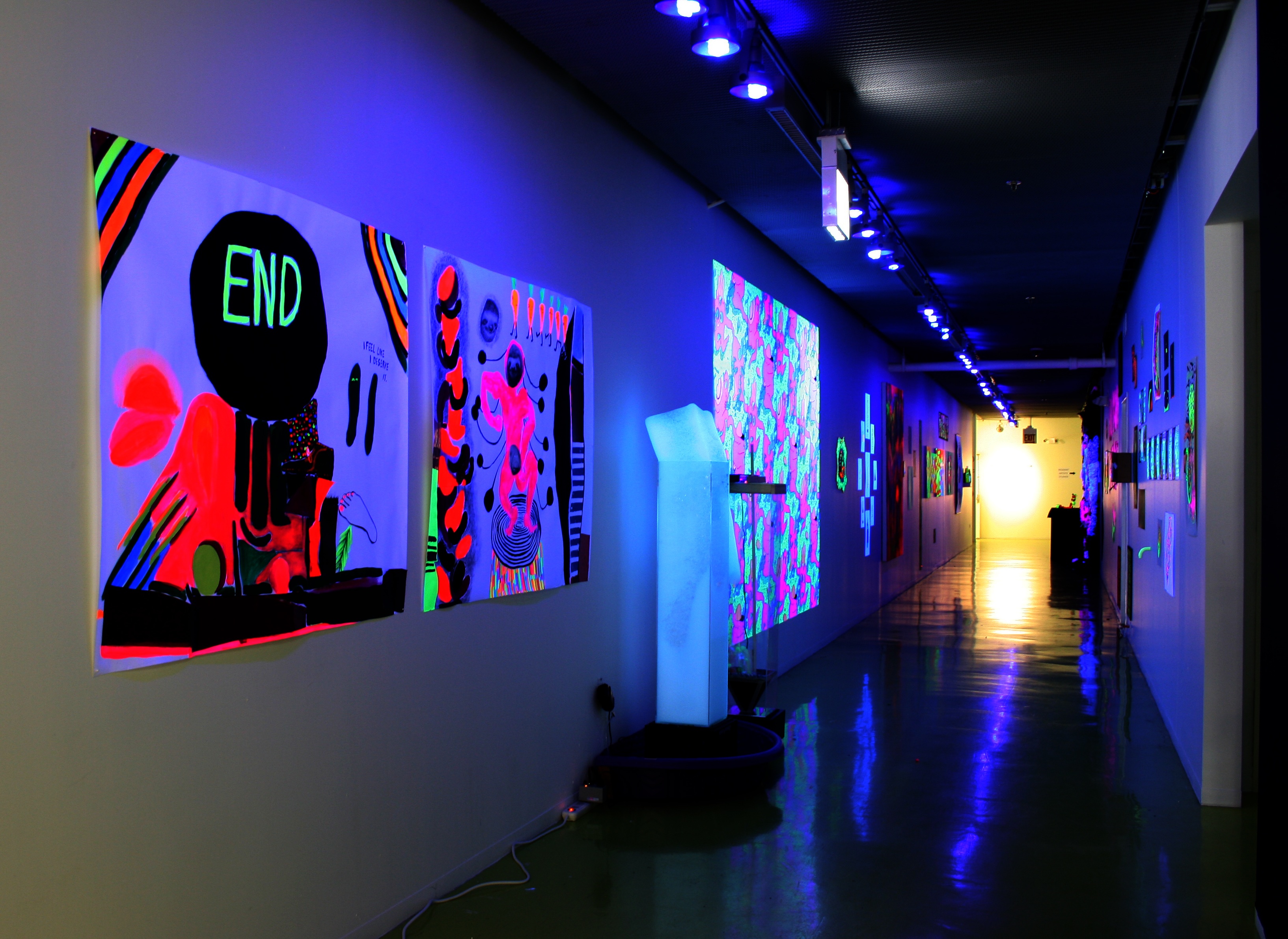 The “Blaque Lyte” show in the upstairs hallway is in fact illuminated with black lights, and features flat and low-relief works that phosphoresce in a variety of sizes and intensities. There are some extremely clean, hard-edged pieces. Lilli Carré’s sinister mask drawings have an obsessive aggression that evokes 1980s underground cartoonists like Gary Panter and Charles Burns more than recalling her usual delicate, melancholy touch. Joakim Ojanen and Hanna Andersson created a large tiled silkscreen of linked furry alien octopi that radiates like a pristine animation projection, and Edie Fake’s paintings on plywood of Op Art spirals and trap doors have all the strange mechanized romance of his full-spectrum work. But Ben Stone’s weird little cardboard box with a plaster impression of Abraham Lincoln’s day-glo orange face, David Shrigley’s suggestive waist-level bright yellow upside-down coat hook, and Mike Andrews’ monumental crocheted tapestry of a dog all threaten to spill, dissolve and crumble into the darkness. 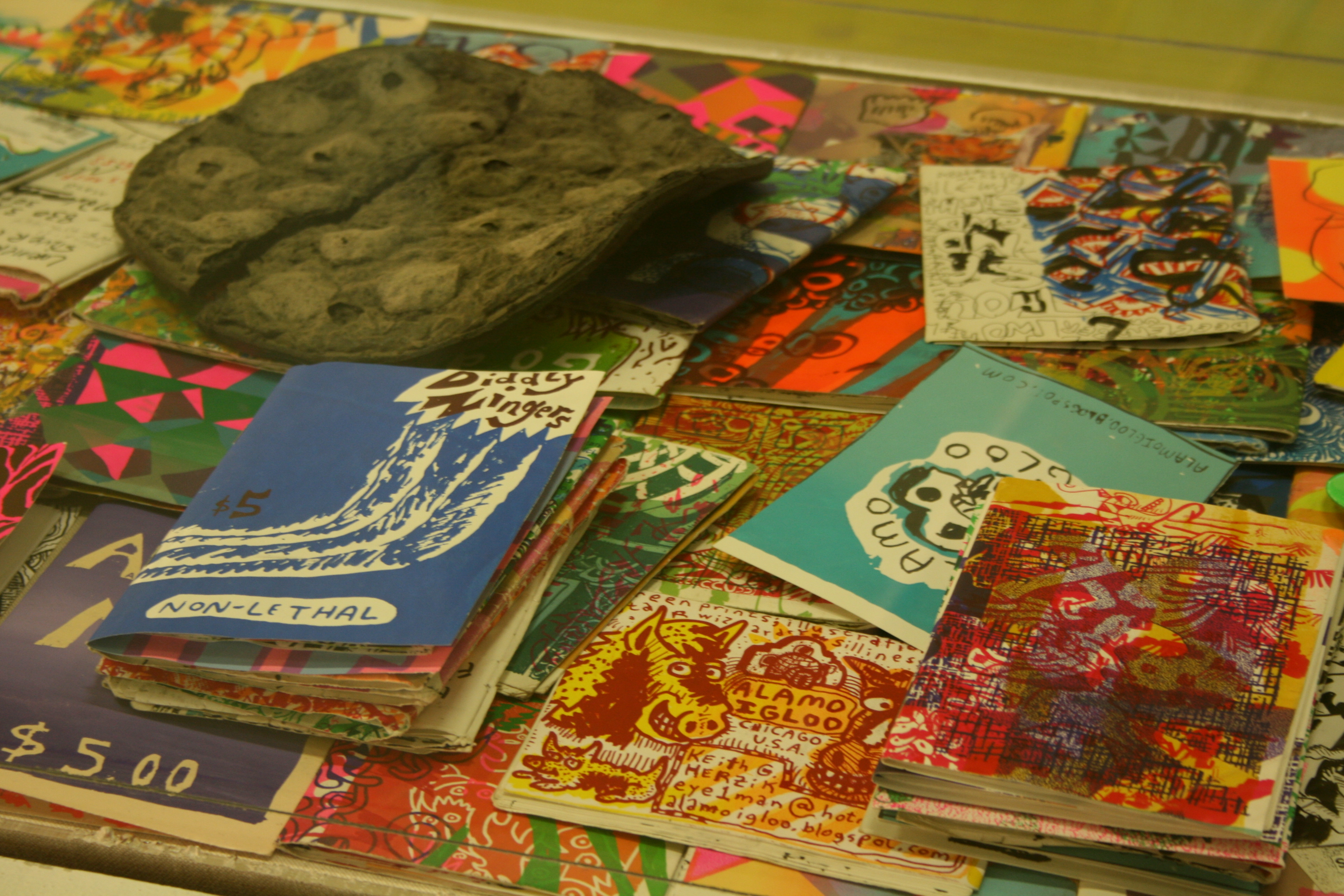 And, despite the lack of black light, “There Are Still Lofty Dreams, Meager Desires, and Still Silliness,” Keith Herzik’s stunning retrospective on the first floor, gives up on any pretense of retentive precision, opting instead for clamorous multicolored visual overload. His many years of relentlessly ecstatic silkscreening, sometimes promoting rock shows and other DIY culture, sometimes just feverish production for its own sake, have yielded garbled, layered images, shapes and words, occasionally congealing into nonsensical jokes and sometimes into blinding patterns, and often into a flashback-inducing juxtaposition of both. A vitrine houses a sampling of his mini-comics, papier-mâché artifacts, and other ephemera (such as a frozen pizza he accidentally baked for six hours).

The topic of consciousness in contemporary art may have a historical connection to drug culture, an idea the aforementioned Ken Johnson proposes in his new book. But in a moment when visual pleasure is (again) somewhat marginalized in fine art, the contrast offered by Pop exuberance may give us a chance to think of the problem of qualia, the way in which our sensory perceptions are ultimately impossible to communicate. Shows like the Herzik retrospective and Blaque Lyte draw us into a silent confrontation with our shared instinct for isolated over-titillation. (Bert Stabler)

Through January 9 at the Hyde Park Art Center, 5020 South Cornell