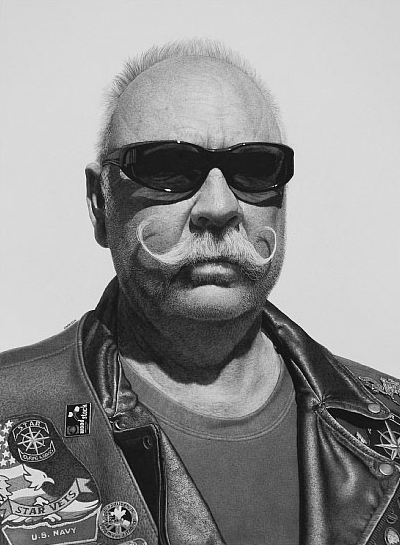 The collapse of the market for stippled illustration might have been the best thing that ever happened to William Harrison, even if it took him more than ten years to realize it. Up until the mid-nineties he made photo-realistic drawings of commercial products for companies like McDonald’s and Burger King. But then his fanatically precise technique of rendering objects with little black dots was replaced by computer software, and like so many other workers in a changing economy, he had to reinvent himself. It didn’t happen overnight, but eventually he discovered a talent for portraiture. The results are breathtaking, and it’s not all about the tiny black dots. He has a real feeling for character and design, as well as an uncommon ability to compose small forms over large ones, so although he shows dozens of tiny facial wrinkles, he doesn’t lose the volume of the head. That’s what masters like Jan van Eyck or Dirk Bouts were doing as they celebrated civic and religious life at the dawn of bourgeois civilization, and it’s no less enjoyable when Harrison applies it to the outlaw bikers of our age. But do bikers really deserve the iconic and meticulous memorialization of their hard faces and wearable signage like “Trust No One” and “Go Fuck Yourself”? For Walter Mitty, they might represent the freedom, risk and masculinity of the open road far from the tiny office cubicle. But unlike the monsters of Chicago Imagism or the fantasy heroes of Cineplex fiction, these are portraits of real men, and unlike the inevitable memento mori of photographic images, the artist’s touch makes them feel alive, vulnerable and important. These old men are, after all, survivors of a hard life. Like some kind of biological specimen, they have been presented against a blank white background, appropriate for characters who have withdrawn into themselves, behind the protective armor of dark glasses and heavy leather coats.

It would be nice if Harrison would portray the faces of these men when they showed more love, hope, humor, compassion or intelligence. Perhaps eventually, like Andrew Tift, the British portrait artist whose charcoal drawings inspired him, he will expand his range. But for now, as Harrison says: “People ask me how many of these biker portraits I’m going to do. I tell them I’ll quit when I run out of bikers to draw.” (Chris Miller)