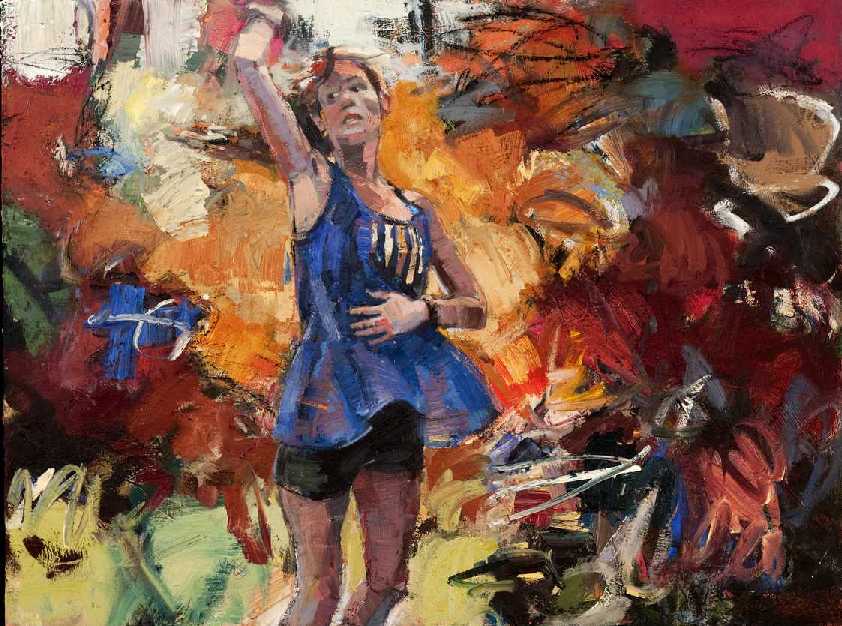 Whereas Impressionist figure painting is about how people look, Expressionism is about how they feel, and usually, like Edvard Munch’s screamer, they have felt pretty bad, and didn’t get any better as recognizable features were left behind by the Abstract Expressionists of the 1940s. But picking up where Ab-Ex left off, Chicago painter Julia Katz has introduced action figures into the foreground and they seem to be expressing the joy of movement. She began, a few years ago, with kids running and splashing around, and now is inspired by the “rhythmic movement of breath, as well as the idea of yin and yang energies” concurrent with her practice of Yoga and Qi Gong. But are recognizable human figures necessary, or even useful for this inward-turning project?

What’s clever is that the dancing figures in the foreground do seem to reflect the jumbled, twisted, knotted, collapsing, impulsive patches of hot color behind them, and I’m sure that the people depicted were enjoying themselves. But what’s not so enjoyable is that it all feels a bit awkward, however much energy is bouncing around. The sketchy figures and garish backgrounds recall the sports illustrations of LeRoy Neiman, but rather than the glories of the stadium or arena, this feels more like the claustrophobic ambience of a high school gymnasium. And who wants to go back there unless you have to? (Chris Miller)

The reviewer seems unaware that EASILY 7 paintings in the show were completely non-objective, and that only two had any pictorial reference to the human figure at all. It’s almost as if the review was based entirely on the one photo pictured above. A cursory glance at the Addington Gallery website also reveals this. It seems, in fact that the artist arrived at the same conclusion as the reviewer – that “human figures were not necessary or even useful for this inward turning project”, but unfortunately, the reviewer never had the pleasure of finding out that the artist actually agreed!

I confess that I was drawn to the show by the figurative painting featured on both Artslant and the Gallery website, and then was a bit frustrated by all the non-objective paintings that were included. It never occurred to me that the artist’s dissatisfaction with the figure led to them being left out of the others.

Which goes to show that making reviews, just like making art, is a process of trial and error.