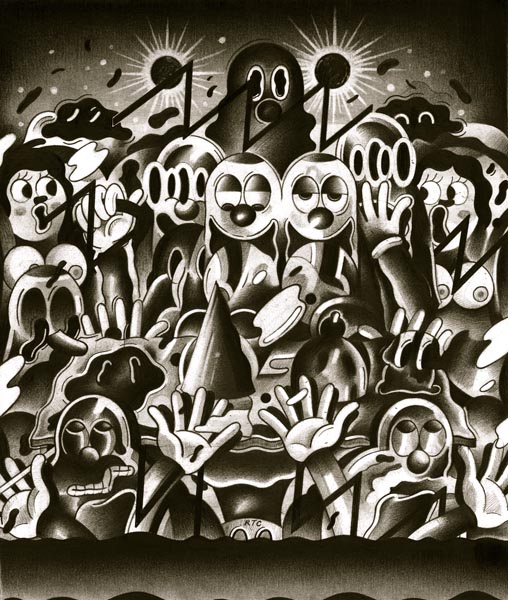 Postmodern wisdom holds that paintings used to be orgasmic—after all, pretty much everyone in those old harmonious oil tableaux used to share identical slackjawed expressions of rapt ecstasy, staring up like nomadic goatherds seeing their first airplane. And then modern art came along and made everything flat and serious and boring. But, while Ryan Travis Christian borrows his melted-plastic cartoon solids from Peter Saul, his soft dreamy atmospheres from Yves Tanguy, and his moire-pattern picture planes from Lari Pittman, the simple gesture of unifying everything with value—black and white, almost no gray—and contrast—hard outlines or uniformly blurred edges—somehow points out the counterintuitive exuberance of Cubism. Picasso, Braque, Christian—the images all look like an early silent film viewed through one of those prismatic lenses used to approximate insect vision. 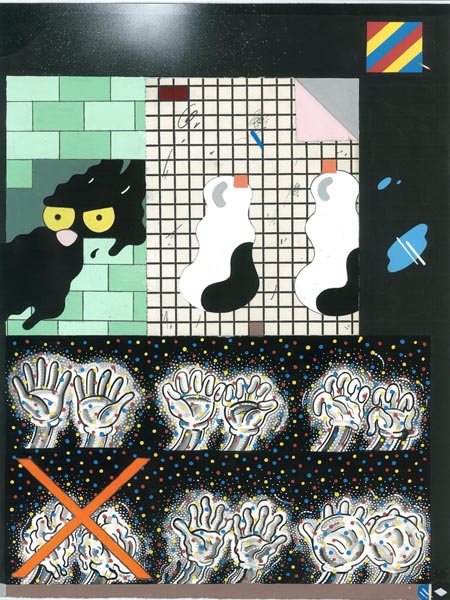 In Christian’s case it might be one of Max Fleischer’s trippy Betty Boop animations, while the Europeans might go for films of street musicians, but regardless, the illusion of motion (and time, and sound) is palpable. The eye scans back and forth, trying to find purchase amidst the clamor, but the startled viewer, like the nomadic goatherd, is just as lost as King Charles I in the 1600s when first viewing stage designer Inigo Jones’ single-point perspective backdrop for a royal masque, intended to mirror the viewpoint of the king.

Along with a generous number of solo works, the viewer in the theatrical funhouse of Christian’s show at Western Exhibitions is also treated to a glimpse of his work as an impresario. Reflecting his tireless work discovering and promoting sympathetic artists, the small side gallery is packed with ambitious drawing collaborations, in which intricate maps of distraction can be divided into regions of signature Ryan Travis Christian graphite and ink zebra-plex, versus the areas of colorful otherness, from the Magic Eye pixel-static discs of Geoffrey Todd Smith to the delicate stippling and mirror-foil collage of Chris Duncan. The strangely synesthetic nature of Christian’s work creates the sense of an idyllic holographic portal, a somewhat creepy minstrel performance of a time when art absorbed and exuded and refracted light, without merely reflecting our fashionable anxieties—a time perpetually just out of memory’s reach. (Bert Stabler)