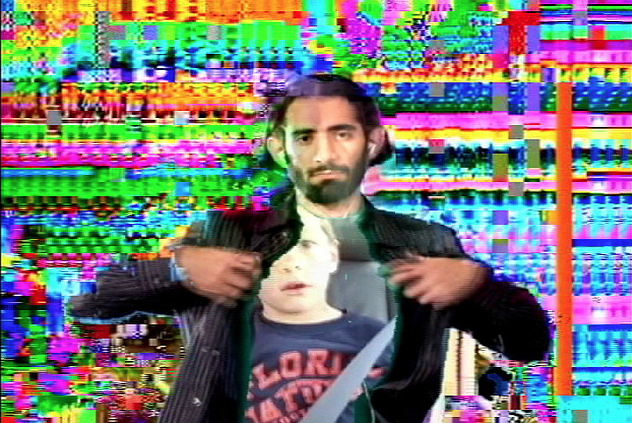 Spinoza and Heidegger made similar points, illustrated with a hatchet and a hammer respectively, that a tool, subsumed in its utility, only truly becomes an object when broken—as do, by implication, our brains and bodies. At the end of Peter Greenaway’s 1985 film “A Zed And Two Noughts,” twin veterinarians obsessed with making time-lapse films of decaying animal corpses finally euthanize themselves before their automated camera—which ceases to function when the room is overrun with snails attracted to the rot. The malfunction, the glitch, breaches the thin line between the ideal, virtual form or function, and the electrified molecules comprising its material substance—and thus, new forms and functions arise.

The 2011 iteration of the art, music and technology conference known as GLI.TC/H will be manifesting in Chicago this weekend, before moving on to Amsterdam, and then Birmingham, U.K. The media that will be represented include “artware, videos, games, films, tapes, code, interventions, prints, plugins, screen-captures, systems, websites, installations, texts, tools, lectures, essays, code, articles, & hypermedia,” not to mention online data-sharing and content-streaming events. Events at MBLabs at Ashland and Carroll bookend the conference, with a gallery opening Thursday and a panel discussion Sunday; the weekend also includes performances and “executables” at Enemy, and screenings and workshops at the Nightingale. Passive media consumption, however, is not the goal. “GLI.TC/H,” says organizer Nick Briz, “is more about sharing and facilitating conversations between the community (new and old) rather than creating an art exhibition and/or festival.”

Builders, hackers, “data benders,” programmers, performers and theorists will be converging from around the world, but there are familiar faces. Prolific multimedia artist Rob Ray, who operated the experimental technology space Deadtech in Chicago for nine years, and performs in the glitchy ensemble I Love Presets with Chicagoans and fellow GLI.TC/H participants Jon Satrom and Jason Soliday, will be in town showing off an interactive “love meter” at the gallery show, as well as DJing with Jake Elliott and presenting a zine at the Thursday after party, and performing with Satrom and Soliday on Friday. A history of the local “glitchscene” over the last decade, documented by Chicago signal-scrambling mastermind Jon Cates (writing and performing as “sum01”), will be presented as an “experimental lecture” and as an essay in the GLI.TC/H reader; Cates and Elliott will also be debuting a new media Internet radio station. And many other purveyors of interference will be sharing wrenches to insert into the matrix, with magical and cacophonous results. Full schedule, fun dragable icons and more links than mortal hardware can process can be found (natch) at GLI.TC/H. (Bert Stabler)