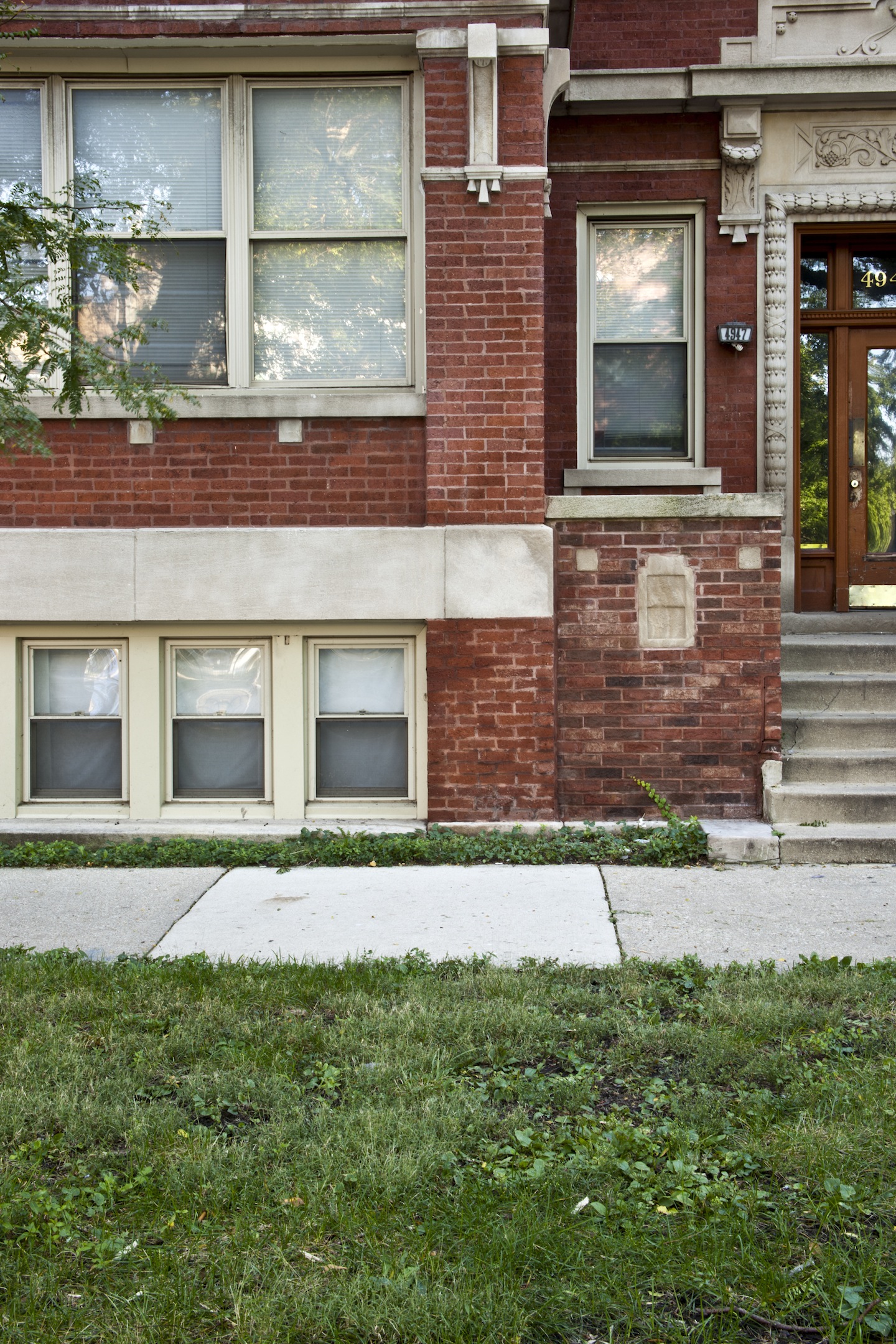 During a typically violent summer in Chicago this year, Tony Fitzpatrick wrote an article for Artnet magazine about Chicago’s legacy of crime and murder—among cops and gangsters alike—and he arrived at the moral that “the city gets just as many killers as it deserves.” Fitzpatrick innately understands, as do many artists, that tragedy makes for great art. Contrary to the common good, some of our greatest art is fueled by conflict. “Reading about the happiness of others is often boring,” writes Charles Baxter in his essay “Regarding Happiness.” Baxter cites Adam and Eve. Before their sin, “they are virtually non-narratable.” It is their sin, and their guilt, that gives their story drive. Following them, we have the Greek tragedies and Shakespeare, George Carlin and Lars von Trier. Two current exhibitions investigate the delicate topics of happiness and violence: “Crime Unseen” at the Museum of Contemporary Photography, and “The Happiness Project,” a citywide curatorial initiative organized by Tricia Van Eck.

“Crime Unseen” is an excellent exhibition because its depictions of violent crime—murder, in most cases—are not horror-film perverse. Here, eight contemporary photographers explore the natural relationship between documentary photography and truth, but they all arrive at the crime scenes after the act, sometimes decades after. These are not witness accounts of the killings but reenactments, reconstructions and retraced steps of infamous murder sprees and everyday drive-bys. While our judiciary system aims to be unambiguous, most of the photographs on view here are open-ended, as if artists have extra sensitivity for interpreting a crime scene, reopening old cases by coloring their terrible realities with attractive presentations. 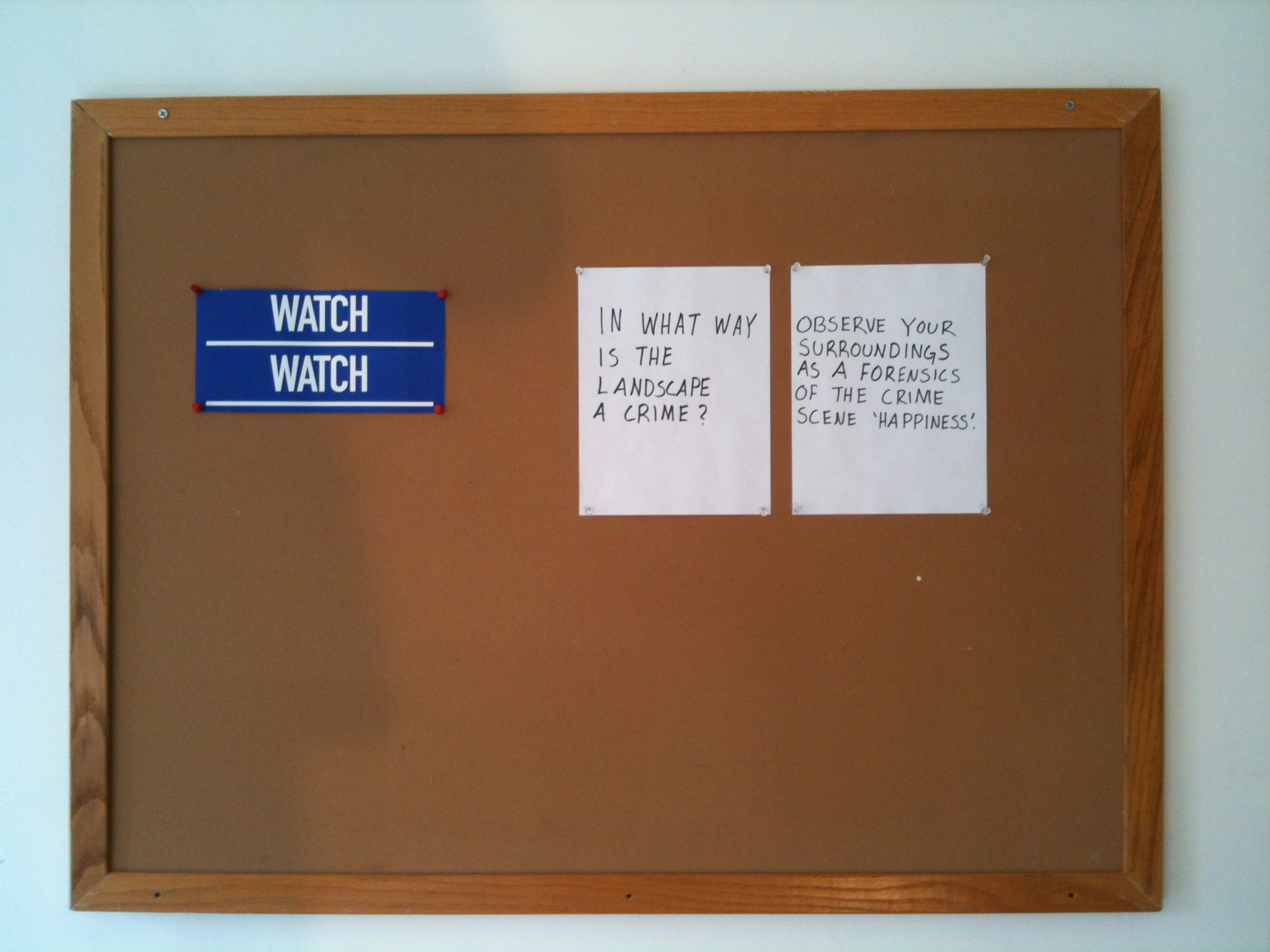 from "The Happiness Project"

“In what way is the landscape a crime?” The question was not posed at “Crime Unseen” but inside a vacant storefront serving as a venue for “The Happiness Project.” The storefront, in Edgewater, had previously served as a community “neighborhood watch” center on a street popular with gangs. Now, the storefront is a home base for several performance-art pieces, including the prompt for performers and visitors to “observe your surroundings as a forensics of the crime scene ‘happiness.’” I intended to be a bystander in that performance but by happy accident I was asked to walk the neighborhood, look for clues, and report my findings on Twitter, which the artists Judd Morrissey and Mark Jeffery collected on a map. Littered mini drug bags and sketchy strangers did not qualify as evidence on this crime scene of happiness; instead, I was propelled to interpret my surroundings as omens of joy. I did not see pure happiness flowing from the gutters, but many manifestations of desire for happiness: lottery scratchers, loose-change charity, a tree dedicated, by schoolchildren, to patriotic death. 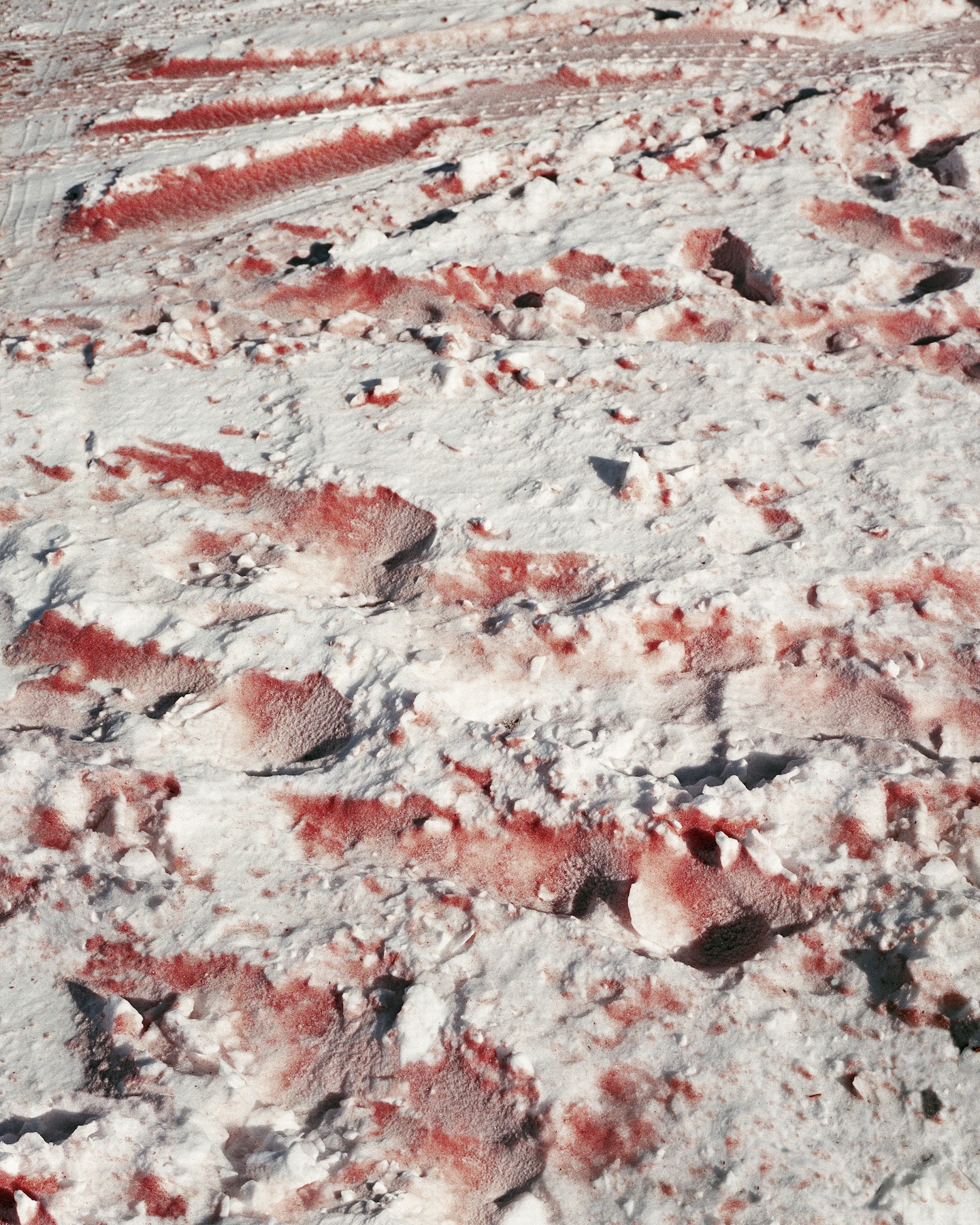 Cruising crime scenes has also been on Krista Wortendyke’s mind. For her ongoing photo project, “Killing Season,” she returns to murder sites in Chicago one year after. There is no “caution” tape or body outlines drawn in chalk, just people-less landscapes. The images end up looking like studies of vernacular Chicago architecture. The sites are shot in a straightforward, deadpan way, akin to Joel Sternfeld or Lewis Baltz. The only thing gloomy about these old crime sites is that they are so banal. Here, murder is common, and life goes on. Wortendyke photographs all of the sites by daylight, although it’s likely that most of the killings happened at dark. The artist’s revision of the time-of-death would seem like a fault were it not for almost all the other artists in “Crime Unseen” making similar creative interventions in fact. For example, Christian Patterson followed his obsession with an infamous 1957-58 Midwestern killing spree in order to make some provocatively pretty images. What looks like bloody snow is just red earth beneath snowdrifts. A fire consuming a house makes an appearance just for dramatic texture. Patterson is a masterful storyteller. His images, made over five years, on the site of the Nebraska killings, and only in January, are evocative and haunting. 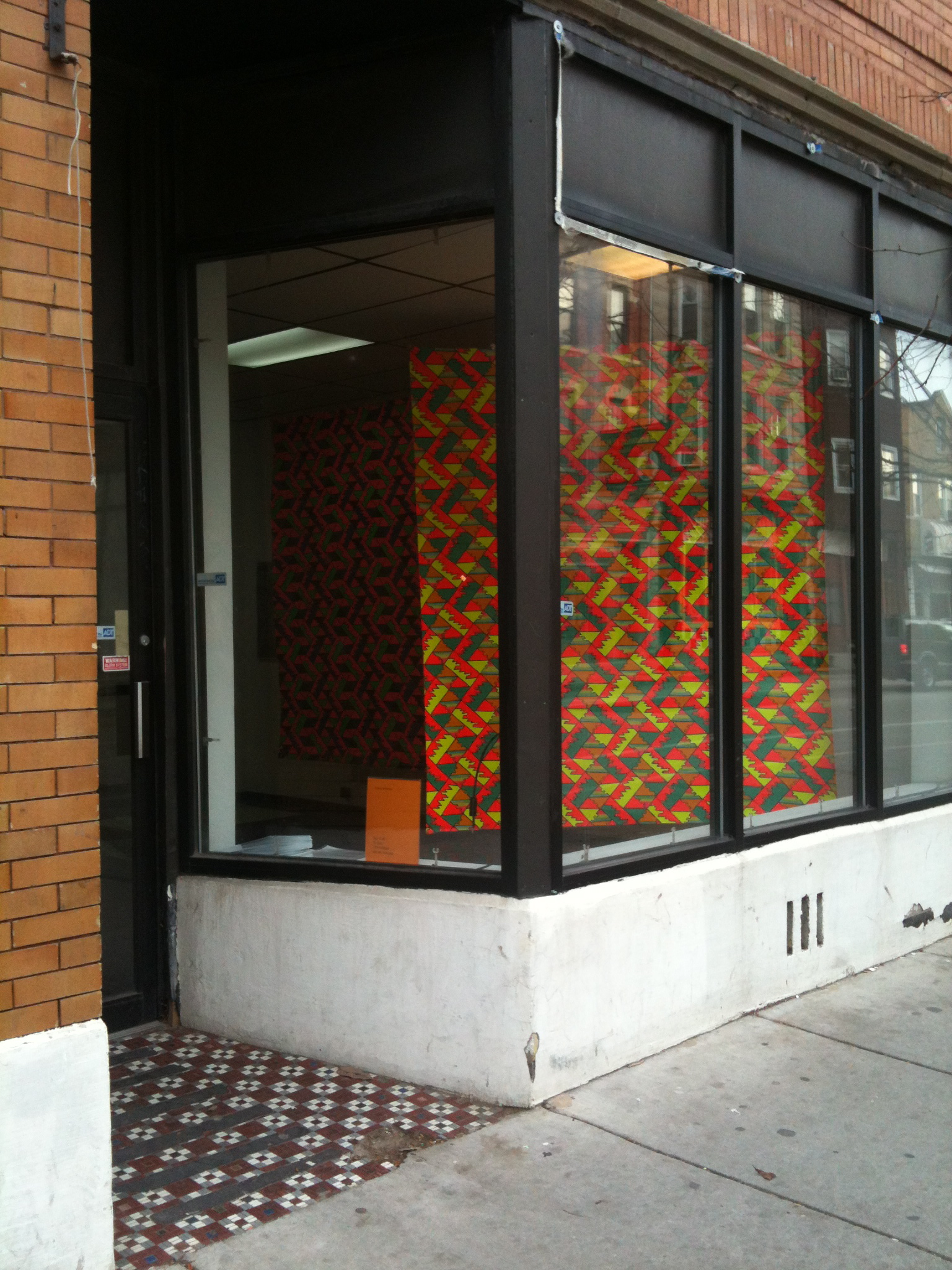 from "The Happiness Project"

While the artworks in “The Happiness Project” are not reliant on objects, they are, like “Crime Unseen,” indebted to the specifics of place. Crime scenes happen in a particular place, and, in turn, the place offers up clues and context. Happiness, too, is site-specific. In Pilsen, a “Cosmic Workshop” has been set up by Derek Chan and Lisa Alvarado to display their large, colorful paintings with patterns reminiscent of indigenous American textiles. In a neighborhood where hand-painted paper signs displayed in windows are common fare, Chan and Alvarado’s pieces beckoned passersby inside, including neighborhood kids who visit the site regularly, like a clubhouse. At the Edgewater storefront, Kirsten Leenaars is interviewing community members, aldermen and local students about the needs and wants of the 48th ward. Using the group therapy approach, she will have everyone play themselves in a film, expressing their desires for happier selves. If more people become involved, the happiness will prosper.