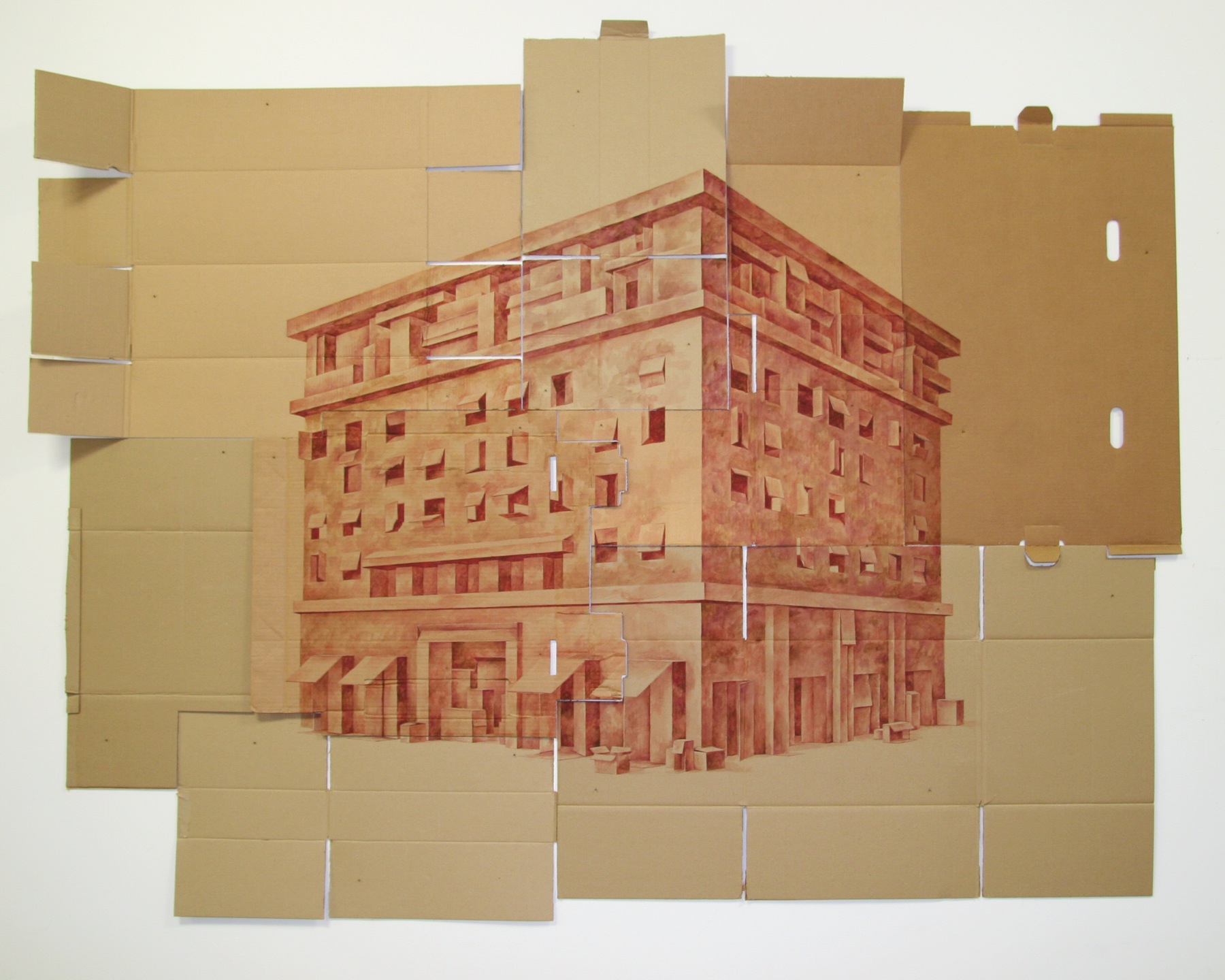 David Lefkowitz’s exhibition, “Facilities and Grounds,” is a careful examination of the relationship between the natural world and the built environments we inhabit everyday. In his series of pristine watercolors on meticulously unfolded cardboard boxes, Lefkowitz depicts everything from grand views of a city, to sturdy-looking stone buildings, to airport terminals. The architecture, however, is completely nondescript; it seems to be no place in particular, just a sprawling expanse that could be any Midwestern city. This work does not create a “sense of place,” but instead meditates on what writer James Howard Kunstler describes as “the geography of nowhere,” or what architect Rem Koolhaas has labeled “Junkspace.” Koolhaas uses this term to characterize the endlessly unfolding architecture of airports and malls, linked together by mazes of faux facades and escalators that lead us in circles until our path is interrupted by an orange cone baring the simple message, “please pardon our appearance,” and we are sent spiraling back the way we came. Lefkowitz’s watercolors are emblematic of this Junkspace where what appears solid and permanent reveals itself to be just the opposite, flimsy and discardable. Lefkowitz juxtaposes these two ideas on many levels: his substrate is “junk” that is repurposed as the foundation for a valuable work of art and the buildings he depicts are, upon closer inspection, actually just of models of buildings made up of stacked cardboard boxes with flaps opening to act as overhangs.

Lefkowitz explores this geography of nowhere even more overtly in a second series of latex and acrylic paintings on wood, on view in a side gallery. Lefkowitz paints imaginary cities with generic, cobbled-together names like “East Blandington Corners” that consist only of roadways directed by barricades and blank signs. Nonetheless, this work is far from programmatic and the message remains quite open-ended. Lefkowitz’s drawings and paintings, although reflective of the strained relationship between the leafy trees and the buildings that tower among them, is not a critique of the way urban environments force nature out, nor is he trying to advance a model of what this relationship should be. The result instead is a quiet investigation of the tension between these two forces. Lefkowitz’s “Facilities and Grounds” lures us into an imaginary, nondescript space where the order of the natural world and the order of the sprawling Midwestern city meet to hash things out. (Regan Golden-McNerney)

I don’t know who first had the idea of depicting disposable architecture on disposable supports, but a more pictorial variation by a German named “Evol” came to Art Chicago two years ago: http://www.wilde-gallery.com/artist_evol.html#08