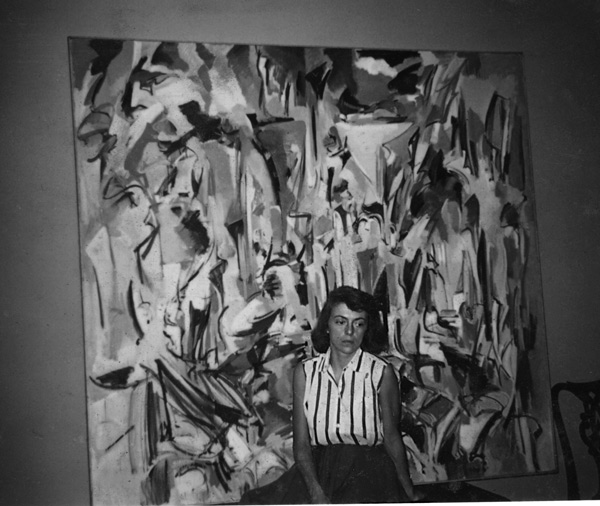 How much do we need to know about the feelings and ideas that give a painter the energy to push a brush around a large canvas? Having just read the new biography “Joan Mitchell, Lady Painter,” by Patricia Albers, I now know a great deal about what Joan Mitchell did from day to day. Some of it, not all, by any means, is pertinent to appreciating and thinking about her work.

This extraordinarily detailed biography on Joan Mitchell will be particularly compelling to Chicagoans for the picture it offers of a financially and culturally privileged girlhood on the Near North Side during the 1930s and forties. Mitchell, the daughter of an overbearing doctor, who “wanted his daughters to compete like boys, but also, confusingly, to behave like little ladies,” grew up with mixed messages. Her mother was an editor for Harriet Monroe’s modernist journal Poetry and friends with Chicago artists like Manierre Dawson. Her maternal grandfather, Charles Louis Strobel, a steel and wrought-iron engineer, a colleague of Louis Sullivan, John Holabird and Sylvia Shaw Judson, among others, constructed the rolling bascule bridge at Van Buren Street. Mitchell grew up in Streeterville, on East Chestnut Street, and later the family acquired a floor of a building at 1530 North State Parkway close to the lake. They “summered” in Lake Forest. However, her years at the progressive Francis Parker School, the Art Institute and Ox-Bow were formative. She was, if I have this correctly, while studying at the AIC, simultaneously a member of the Communist Party and listed in the Chicago Blue Book, the social register. She left the AIC with exhibits and honors in the shape of a traveling fellowship, wishing she could draw like German social-realist printmaker Käthe Kollwitz. “I am thinking it was mean of God not to let me draw like Kollwitz,” wrote Mitchell, who worked early in an Expressionistic style. Years later, in 1993 on a visit to receive an honorary doctorate from SAIC, Mitchell “described Chicago as hard and male, a town of testosterone, brutal and beautiful in equal measure.” 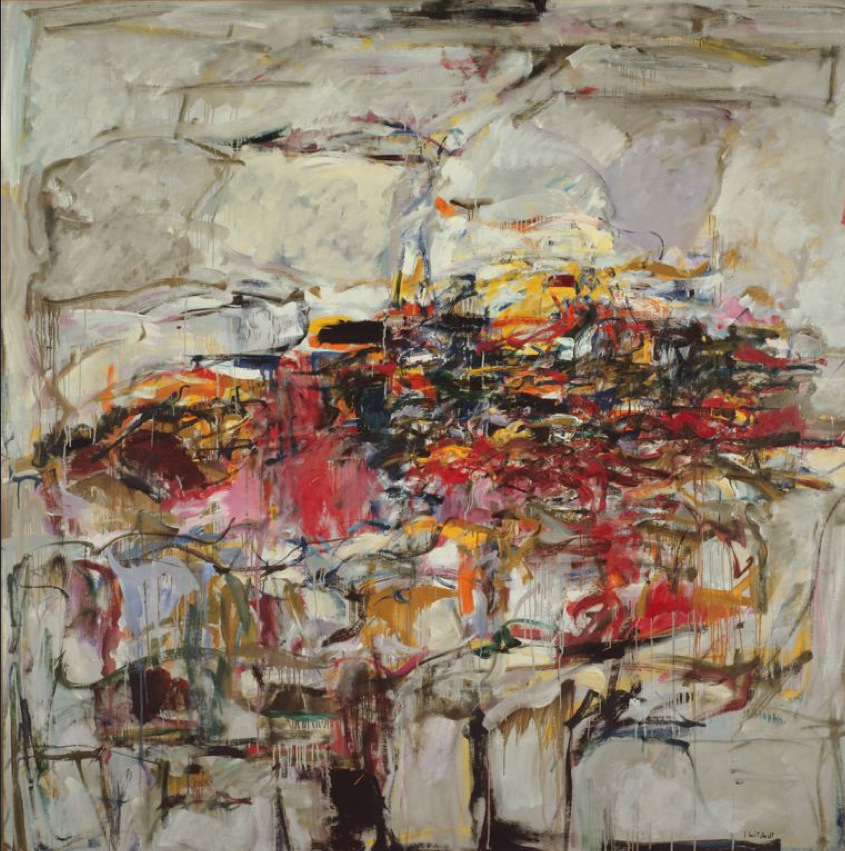 Joan Mitchell, "City Landscape," 1955, at the Art Institute of Chicago. © The Estate of Joan Mitchell

Mitchell was a girl in the boy’s club of the New York School. She led a delirious life drinking at the Cedar bar, cursing and sleeping around, “crotch sharing,” in her words, although she initially left Chicago to join and marry former Parker classmate Barney Rosset, who later was head of Grove Press. She spent summers in the Hamptons painting and partying. What remains important is how Mitchell’s harrowing of New York is transformed into line and color, that is, into paintings that express the storms of anger (Albers calls it “fury”), vitality and sorrow that everyone, even the most sober among us, feels. Albers launches various theories regarding what she calls Mitchell’s “sexual adventuring,” which began long before the sexual revolution or feminism raised questions about woman’s roles and appetites. Mitchell never really signed on with the feminist revolution; she seemed to operate on her own although she had friendships with Elaine de Kooning and Grace Hartigan. Perhaps she loved in the same way she painted: refusing to obey conventional rules defining gender. The biographer is likewise fixated on Mitchell’s synesthesia, and mentions other synesthetes, like Rimbaud, who famously counseled: le dégrelement de tous les sens, in the service of illumination—a precept Mitchell followed if we judge by her biographer’s patient record of Mitchell’s seasons in hell. While the subtitle of the book, “Lady Painter,” refers to Mitchell’s own ironic description (she was famous for cursing, shocking and pointed remarks), it echoes Simone de Beauvoir’s observation that while we note a “woman” author, we do not generally distinguish a “male” author.

Joan Mitchell was a great American painter who has been neglected—although she decamped for France around 1955 where she lived in a village along the Seine outside of Paris, painting in the silvery light of the river, and enjoying a rich social life, making friends with the likes of Samuel Beckett. When the Art Institute opened the Modern Wing with Mitchell’s “City Landscape” (1955) in an alcove with “Greyed Rainbow” by Jackson Pollock and “Excavation” by Willem de Kooning, I was relieved to see that the painter had finally been given her rightful place as a key gestural abstractionist of the New York School.

Mitchell lived long enough to see the end of the ascendancy of painting. “There are no more painters, she insisted, only object makers, installation builders and cartoonists,” although she continued her turbulent search, and the book’s meticulous narration of her messy life and fierce romantic dedication to painting will be inspiring for any creative person. As for the complicated relationship between art and life, French critic Yves Michaud explained in a catalog accompanying one of her late exhibits at Galerie Jean Fournier: it (the painting) is the ground on which the confrontation takes place, on which the crisis is resolved.