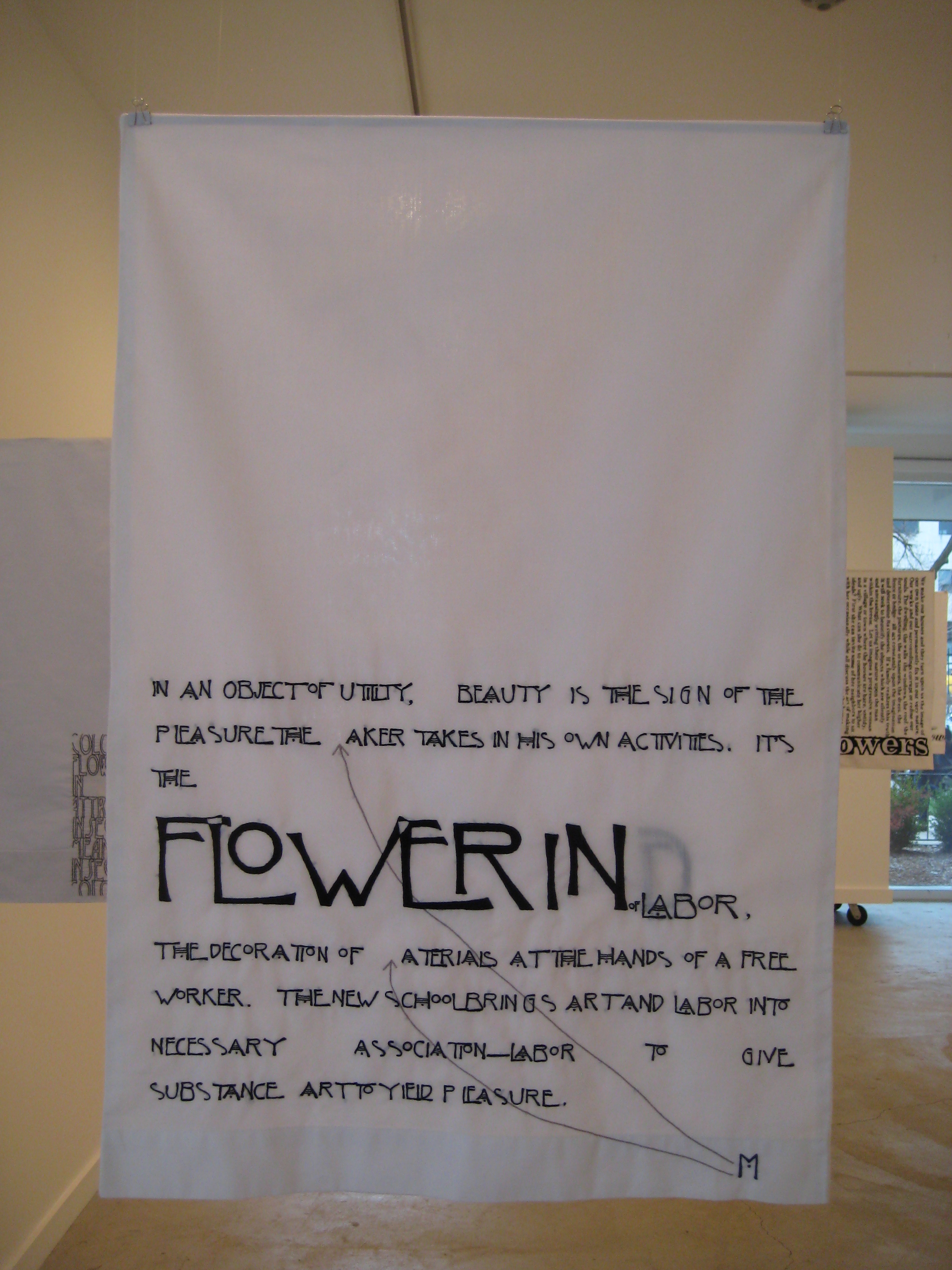 NOTE: The gallery is temporarily closed due to an electrical fire.


Way back before the millennium, the Art Institute of Chicago hosted an exhibition of French artist Annette Messager’s amazing textile-based installations. I wandered among hanging forests of plush organs, taxidermied birds wearing crocheted sweaters and perched/impaled on rebar, tangled webs of yarn and crayons, and ceremonial dresses laid out in long glass coffin-like cases. And, like the opening reception for Karen Reimer’s show at Monique Meloche Gallery, the space was sunk in a twilight gloom. Negotiating Reimer’s hanging pillowcases adorned with ornate text, the sense of being in an upside-down cemetery was only enhanced by the fact that Reimer was selling rubbings of the embroideries, one of which hung framed near the gallery entrance.

For Reimer’s show, though, the lighting was a snafu—the gallery had blown a fuse, and they had to make do with clip lamps on the ground. But, even if accidental, the overpowering of the white cube by a crepuscular cabinet-of-curiosities ambiance helped set the stage for the needlepoint quotes from Victorian aesthetic demagogue John Ruskin and others associated with the Arts and Crafts movement, all weighing in on the appropriateness of decorative ornament in sinuous Art Nouveau lettering. But the clean, bold design, featuring plenty of creative orientation and cropping (based, I believe, on the placement of floral motifs on pillows), reflects the debt of twentieth-century art to advances in typography—“the flatness of an interface,” as Jacques Ranciere put it. Reimer’s juxtaposition of fin-de-siecle “high” craft, modernist design, mechanical and handmade domesticity, and conceptualist verbiage make for a handsome series of works—which all echo the foundational (even antique) postmodern doxa that, deep down, all art is decorative.

But feminist fiber artists like Miriam Schapiro and Faith Ringgold made that point well before Philip Johnson stuck a Chippendale pediment on a skyscraper—and even that was twenty-seven years ago, when text was being transmuted into confrontational fine art by Jenny Holzer and Barbara Kruger. It’s not that new artwork needs to push buttons or boundaries—postmodernity debunked that way back when. But compared to Gary Simmons’ 1991 “Us” and “Them” robes, Lee Relvas’ black-on-black oil spill koans, Ghada Amer’s densely stitched orgies, or even Cheryl Pope’s banners in Monique Meloche’s window (based on high schoolers’ touching statements on self-image), or Reimer’s earlier, more oddball work—the pillowcases, despite their hard-edged handiwork, are labored in their slickness and self-awareness. They are solid exercises in design—any one would make an appealing web page, print ad or, for that matter, boutique pillowcase. But, either in flatness or in depth, in the oblique scrawls of high-art expressionism or the devotional iconography of a quilt, Ed Ruscha’s tag lines or the incised couplets of slave ceramicist Dave the Potter, a complete effect requires some shadows. (Bert Stabler)