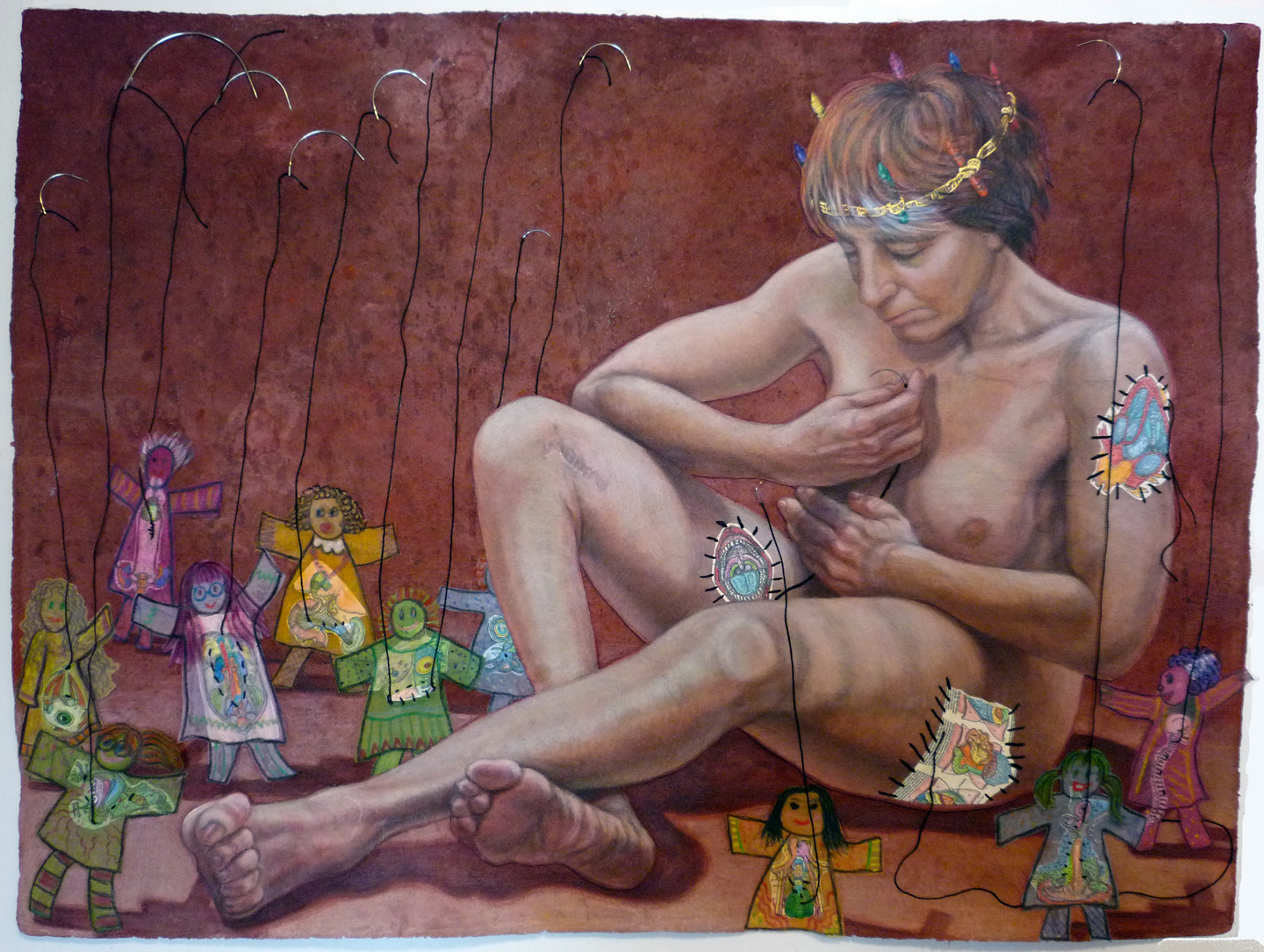 Riva Lehrer’s art is fundamentally about one thing: the body in the world. Which is not to be reductive. The potential for variation is limitless; how we live in our space and interact with each other, how we are shaped by and how we shape each experience. Lehrer’s most frequently considered variation is that of variation itself, often in the form of disability and the psychological freight of being seen as something other, something different, which stems from disability. With variation come questions of beauty: what is beautiful and how do we define it, and how can our ideas of beauty expand to encompass more than the sort of vacant-eyed plasticized images constantly crushing down on us.

Born in Cincinnati, Ohio, in 1958 with Spina bifida—a developmental disorder in which the vertebrae overlaying the spinal cord are incompletely formed, allowing segments to protrude and causing anything from physical deformity and paralysis to striking abnormalities of the cerebellum—Lehrer’s understanding of bodies in the world has only grown in elegance throughout her artistic career as she endeavors to create a space in which her own body fits. The sense of empathy she feels toward her friends and heroes—her models—is expressed with a tenderness toward flesh in subtle and often sumptuous tonalities, an almost motherly devotion to the physical softness and strength of those who sit for her, even when those models themselves live with sometimes debilitating disability. 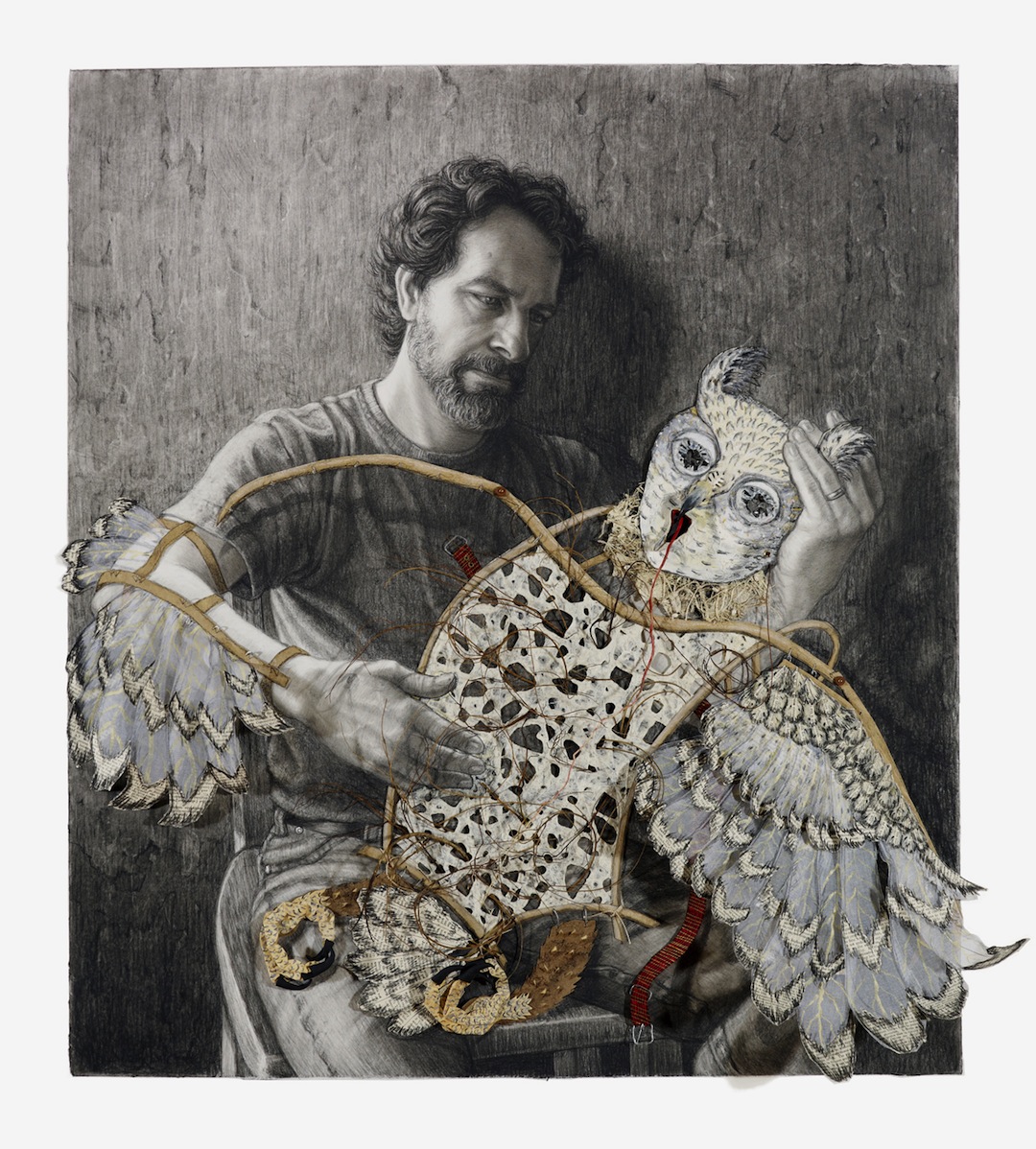 In her new work, Lehrer also folds in explorations of gender and the human relationship with animal metaphors. “TIM/OWL” is a portrait of Chicago artist Tim Lowly, cradling in his lap a delicate construction of an owl made of sticks, string and feathers. The owl has only a left wing and seems ready to crumble, though Tim wears feathers on his right arm in an offer of support. Lowly’s own daughter has cerebral palsy and is completely dependent on her parents, yet without this knowledge, one can see a whole life of emotion in the radiant energy surrounding Tim’s eyes as rendered by Lehrer, and track that radiant emotion from him to the owl symbolizing the child he actually holds with such tenderness. Unforgettably lovely as the drawing is, Riva says she’s only “almost happy with it. If I had it to do again, there are one or two things I would definitely do differently.” Lehrer said that Lowly has pushed her in her work, which was far from painless considering how hard Lehrer pushes herself. “Some of these pieces I’ve completely torn apart four and five times.”

Lehrer’s newest self portrait, in fact, “Coloring Book,” shows us how the artist patches herself back together again; using real suture needles which pierce the paper and hang in the air like balloons attached with thread to dolls clustered around Riva where she sits, she stitches pieces of paper into her thighs and arms. On her head is tightly fastened a crown of crayons, and one wonders if the Lilliputian paper dolls that make up Riva’s audience view her as a sort of martyred Gulliver. 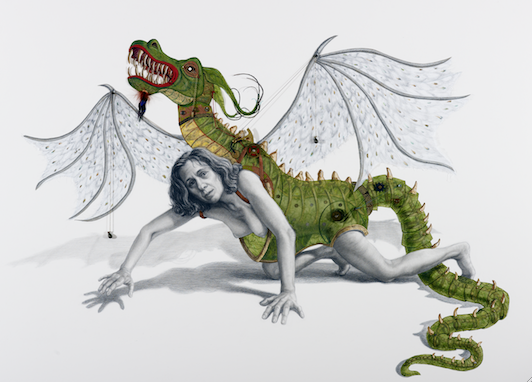 Another animal piece, “SHERI/DRAGON,” is one of Lehrer’s most complex and stunning new works, featuring the model on all fours enclosed in a dragon costume composed of fine translucent green Amate paper and embedded watch gears with weights threaded along the dragon’s body. The model carries this creature on her back with some measure of visible discomfort; though translucent of skin, the moving parts make the dragon appear as a completely operational and substantive being, its rib cage and spine enclosing Sheri’s own like a prison.

“Throughout history, animals appear in fables and literature as anthropomorphic entry-points for empathy. We readily bond with an animal proxy because it provides this chaos space into which we can project ourselves, identifying with our own notions of animal qualities as opposed to the qualities of other people. We have great empathy for animals—which is ironic to me since we’re slowly and constantly destroying them—and a strong need to relate through their attributes and qualities. So great a need, in fact, that we invent certain animals—like the dragon—to characterize aspects of ourselves, or aspects that we wish to see in ourselves,” Riva said of her newest work. And though Sheri seems burdened by the construction around her, the dragon itself is fierce, mechanically mythic like the Golem. She seems to be working up the nerve to live as this creature, attempting to rise, to assume the power of this other skin around her.

Which may not be unlike Riva Lehrer herself, as she tears through membranes of typical understanding and notions of physical beauty and strength. She continues to remind me of a dragon in her own right, living epic moments and laboring to reconcile the misconceptions of a world with a limited vocabulary for variation by making art that itself is symbolic of strength and utterly beautiful.