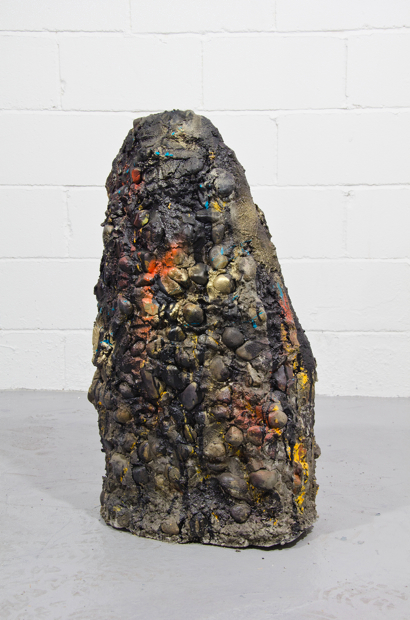 The perverse enjoyment I get from looking at the assemblages of found organic detritus (leaves, icicles, rocks) in Andy Goldsworthy’s photographed interventions in natural settings is digestive—the way he takes an otherwise lovely bucolic scene and vandalizes it by, as humans do, taking something perfect and making it (look like) crap. He might as well just litter. I had something of an inverse, but still perverse, response to “Mountains and Matter,” Bob Jones’ great solo show at 65Grand. What his floor sculptures and wall pieces did to the pristine white gallery was similar to what one does to a pristine white sheet of toilet paper. Recoil if you must, but, for my money, there’s a lot more to look at “after,” as opposed to “before.”

Smeared with tar, pebbles and spray paint, mired in concrete, grout and latex, bound in filthy rubber and canvas, festooned with hay and twigs, these pieces operate for me as thoroughly enjoyable riffs on psychedelic-pastoral art of the 2000s. “Sightseer,” a small wad of agglomerated detritus sitting on the floor, makes for a convincing owl pellet, while the larger and more colorful and sparkly “Grotto” could be a giant calcified unicorn poop. The hanging piece “Dreamcatcher,” a styrofoam toilet seat framing an accumulation of twigs points out how easy it is for a God’s-eye to suggest an anus—as does, in fact, the gold spray paint crudely marking a star over the caked-up black surface in “Cave.” The gold recalls the psychoanalytic association between feces and money, as the hanging phallic clump “Bouquet” underscores the feces-penis connection. The besmirched canvas disc “Survey” provides a spread-out version of the used tissue referred to earlier, and in “Snare,” the ring of hay embedded in tar functions as a tribute to Georgia O’Keeffe’s orifices, albeit round the corner where fudge is made. The artist never tires of playing with his byproducts. 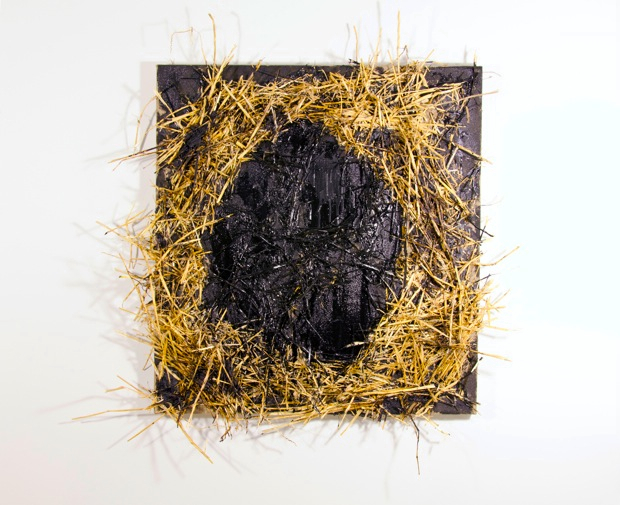 The display of excrement of art has a distinguished legacy—from Piero Manzoni’s canned shit to Chris Ofili’s elephant manure to Paul McCarthy’s giant outdoor inflated turds. Slavoj Zizek has proposed that the cultural aura of the fetishized object is so tenuous that the artist who proffers an abject artifact does so in order to reinforce the status not of any particular object, but of the space of reverence, the Godhead. Art could be what remains after the idol has eaten the food offered to it, and finally become “the thing in itself” that exists for no purpose whatsoever. But in contemplating such an object of repugnance, Julia Kristeva notes the ironic possibility for ecstatic transport. “The ‘sublime’ object,” she says, “dissolves in the raptures of a bottomless memory. It is such a memory, which… transfers that object to the refulgent point of the dazzlement in which I stray in order to be.” (Bert Stabler)