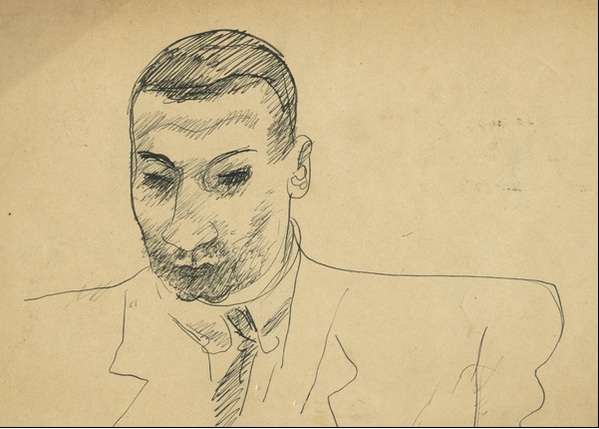 The legend of Edgar Miller continues this month with a collection of sketches and memorabilia at Richard Norton Gallery. Drawing from the estate of his brother, Frank, this selection is much larger than the few objects that appeared at ArchiTech Gallery earlier this year. But it’s still disappointing, compared with the glories that are shown in “Edgar Miller and the Hand-Made Home,” the coffee-table book that was published in 2009. The problem is that so much of his work was built into and onto homes, including his own on Burton Place. He had the kind of “see horse, draw horse” genius that goes back to the beginning of art history, and just like the masters of the Lascaux caves, Miller could capture the life of an animal, or a person, in just a few simple strokes. This show has dozens of his drawings, done from ages thirteen to seventy, all of them showing that mimetic spark that makes his art deco designs so enjoyable, including the etched-glass panels on display at the Art Institute.

But his restless spirit was perhaps too attracted by a variety of materials and projects to settle into any one discipline, despite the recognition that his oil paintings received in local and national shows. One of those pieces, a cityscape that won the Logan Medal in 1944, is on display in this show as a copy later made by Miller himself. But it has been slap-dashed together as more of a cartoon storyboard than a serious painting. Commercial opportunities seem to have inspired him more than artistic vision, and this show includes a variety of his commercial work including plates, restaurant place-mats, fabrics, Marshall Fields’ brochures, and cartoon designs for the murals he painted at the Normandy House restaurant on Michigan Avenue. While professionally done, most of this stuff is forgettable.

What’s not forgettable are his quick sketches and portraits, combining a likeness with the taut severity of Modernism. He was always feeling the page, not just the subject. And many of these subjects are fascinating windows into Chicago life of the time, like his sketch of Ben Reitman, the “hobo doctor” who hung out with Emma Goldman and other anarchists at the Dil Pickle Club, located beneath Miller’s studio. (Chris Miller)