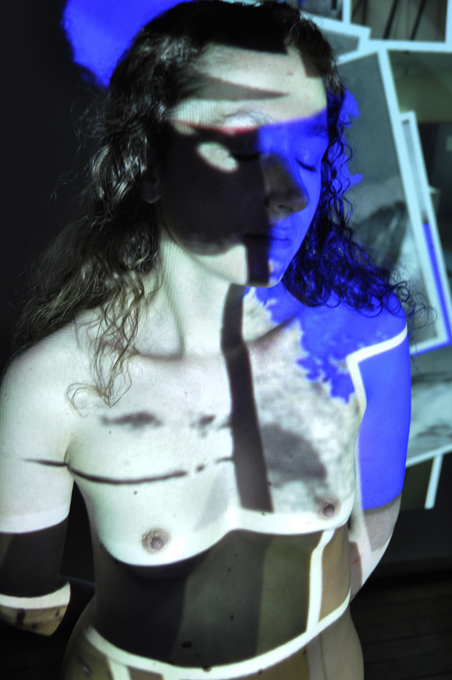 From Jean-Robert Franco’s black-and-white large-format full–frontal female nudes, standing and staring straight at us impassively; through Elena Elbe’s color studies of overlapping exposures of the same nude woman that illustrate the conceit of “Me, MYSELF, and I,” and Steven Bernas’ crazy-colored, distorted and ghoulish figures—constructed by projecting snippets of pornography and his own handiwork on images of nudes—who inhabit “tactile territory;” to Francoise Anger’s atmospheric, astral color abstractions of volatilized figures, we run a gamut of the wildly contrasting ways in which the human body can be represented to evoke whatever sense of existence with which an artist might like to conjure. For sheer shock and visual impact, Bernas steals this show of contemporary French photographers, taking us into the depths of a surreal demimonde at the heart of which is his own chamber of horrors; an outsized twisted torso sporting a jelly belly astride ordinary legs (albeit colored in motley patterns) is a case of the cubist Picasso meeting the infernal Marquis de Sade to form a grim alliance championing sadistic patriarchy. (Michael Weinstein)