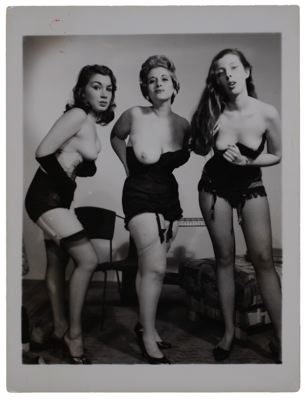 When Peter J. Cohen went through his vast collection of old anonymous snapshots gleaned from flea markets and garage sales, he was struck by how many of them depicted female threesomes, gathered those together, tacked them on the gallery wall, and titled the exhibition “The Three Graces”—beauty, charm and grace. Billed as a history of women’s presentation of themselves to the camera over most of the twentieth century, the show is nothing of the sort—all of the images are black and white, and most of them seem to come from the mid-century decades, although one cannot be sure, since they are not dated or seemingly chronologically ordered. What we get are informal group portraits and girls just wanting to have fun and more-or-less succeeding, whether by vamping or horsing around. The last group is where you want to focus, because that is where the graces are thrown out the window, their place taken by unrestrained play; two women—one exuberant and the other less so—bend over and press their buttocks together, while the third stands over them, resting her elbow on one of their backs and looking straight at the lens with consummate insouciance. (Michael Weinstein)

Through January 22 at the Art Institute of Chicago, 111 South Michigan Avenue