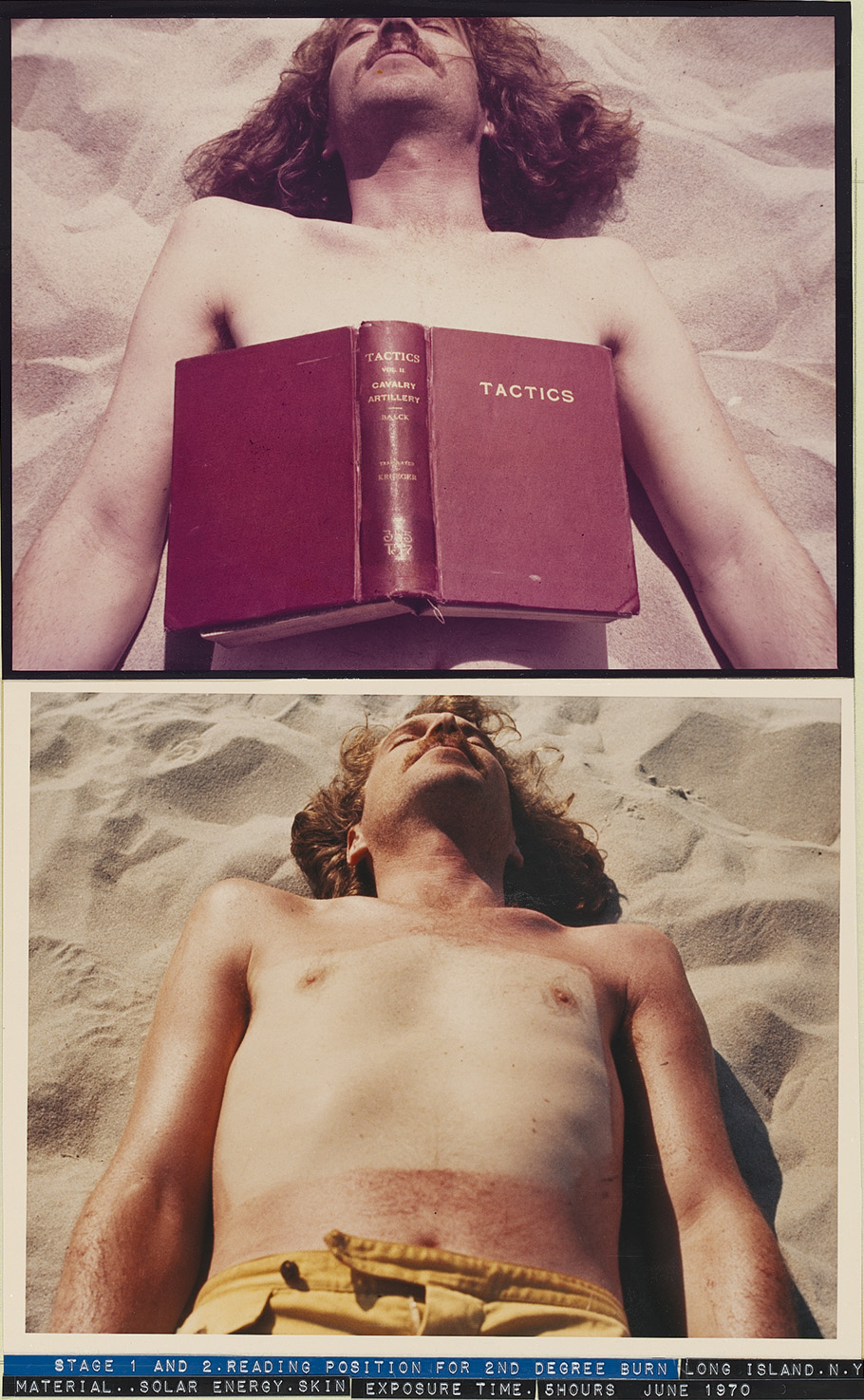 In my notes for the exhibition “Light Years,” I scrawled to myself that of the multitude of photographs and other lens-based work in the Art Institute’s ambitious show of photo-conceptualism, half a dozen or more involve scenes of beaches. Jan Dibbets’ careful formal studies of tides and waves in photography and film bookend the show. Beaches also appear in more playful work like John Baldessari’s “California Map Project” and Eleanor Antin’s “100 Boots.” And Dennis Oppenheim’s “Stage 1 and 2. Reading Position for 2nd Degree Burn Long Island. N.Y.” documents the artist self-inducing a sunburn with a book on his chest while lying in the sand, treating his body like a kind of raw photographic plate to be exposed by the sunlight. A consideration of these images alone suggests not only the scope of this show but also this reviewer’s psychological need to focus, at times, on a single motif so as to keep from feeling utterly overwhelmed by an exhibition this big, which makes a strong argument about a decisive watershed moment in art history.

The idea behind the show is ostensibly simple, and long overdue: devote a major museum exhibition to the role of photography in the 1960s and 1970s. Curator Matthew Witkovsky carefully tracks the garden of forking paths that emerge from the relationship between conceptual photography and contemporary art, teasing out the emergence of photography as a sanctioned high-art medium even as Conceptualism threatened to subordinate the medium itself. The major achievement of the show is its presentation of a range of things that a photograph might be, and the potential of the medium as a kind of interstice between performance, sculpture, mass media and text—as borne out through dozens and dozens of small revolutions with the lens. 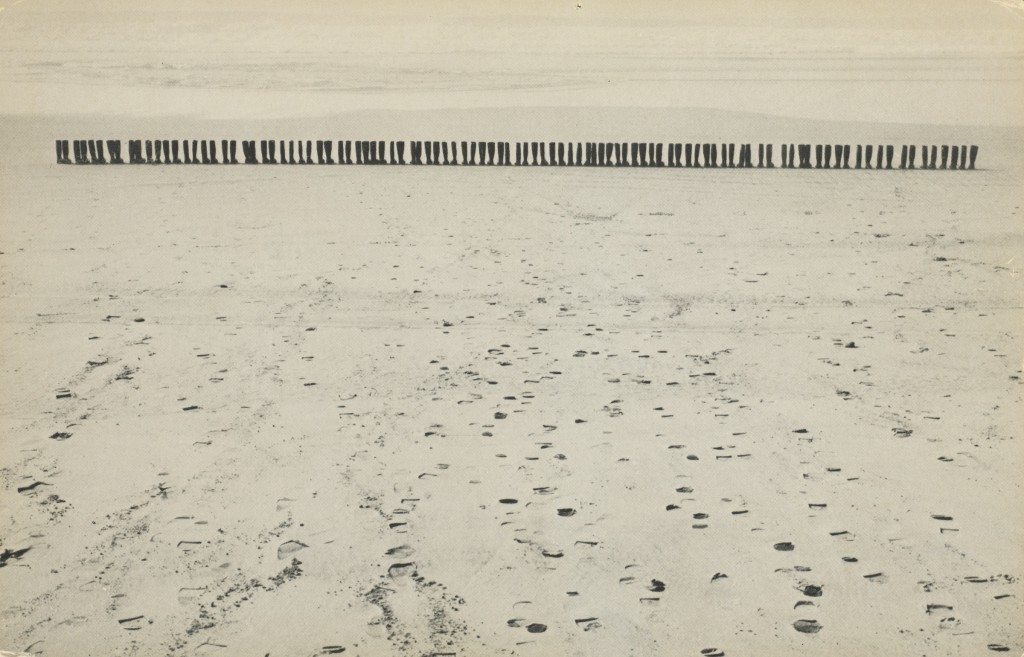 To try to delineate or even list the artists whose work appears in the show is beyond daunting; artwork you’ve most likely only seen in anthologies of Conceptualism are grouped in thought-provoking arrangements under deceptively banal headings like “invisibility,” “materiality” and “misconceptions,” (a reference to the show-stopper piece by Mel Bochner that includes the famous “Encyclopedia Britannica” declaration that “photography cannot record abstract ideas.”) And methods, motifs and echoes, from postcard tropes to studies of failure and the scientific method, create conversations between pieces scattered throughout the show. A video of Gordon Matta-Clark’s cut buildings recalls Bruce Nauman’s holograms in their exploration of space and surface. Ed Ruscha and Dan Graham’s studies of boring houses play on the form of commercial photography. Work by Arte Povera and other European conceptualists adds another layer to the conversation, as do early pieces by Laurie Anderson, Gilbert & George and Adrian Piper that suggest the next wave of photography’s dialectic. Marcel Broodthaers’ exquisite portrait of a young woman with a tripod suggests the complexity of the relationship between painting and photography. One of the most enjoyably difficult motifs that’s more subtly drawn out here is the symbiotic but somewhat tense relationship between ephemeral conceptual work that both requires and seems to resist photography’s documentation. In his artist talk, Robert Barry explained, in an anecdote about the origin of his inert-gas series, that he didn’t actually want to document the series and make the photographs that are now canonical: “I wanted to go onto the next step and use just information and text,” but was talked into photographing his performances by his dealer. 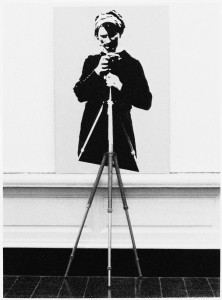 There are a few pieces by Sol LeWitt and Robert Smithson included that provide a brief pre-history of photo-Conceptualism, but the full impact of what happened when artists rediscovered the camera in the sixties is best articulated by the artists themselves. At last Friday’s symposium of artists in the exhibition, Jan Dibbets described seeing an advertisement for a Donald Judd show at a gallery, only a few square inches large, in a copy of the magazine Studio International, hard to come by in Holland at the time. “I realized I had to give up painting completely. It was post-painting now, there was something else. Nobody knew what. It was like a holy grail… I remember the shock of holding a camera for the first time. We knew nothing about the camera and how it worked. That was a big advantage.” Similarly, Al Ruppersberg’s revelation took place at a show of Frank Stella’s protractor series: “I knew then that the idea of painting was over, and I’d have to start over again.” That sense of epiphany doesn’t quite make it into “Light Years,” but the subsequent excitement about exploring photography is palpable on every wall.

Through March 11 at the Art Institute of Chicago, 111 South Michigan