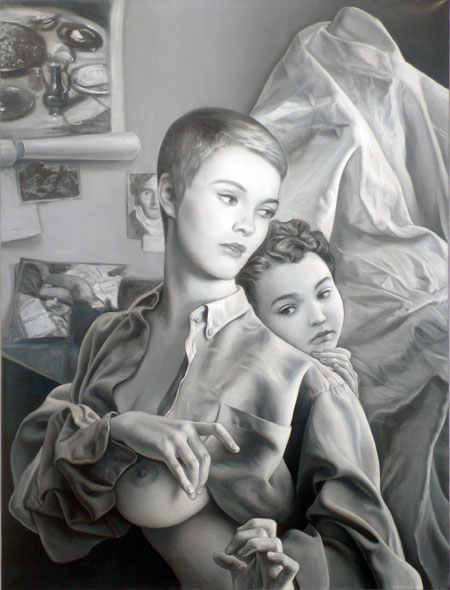 These are illusionistic paintings of a pretty girl with her clothes off. But rather than presenting either an ideal of femininity or a sharp look at reality, they are related to academic discourses in art, economics, gender and media studies. It’s what you might call “postmodernism,” which in this case centers on a respectably erudite obsession with an icon of film history, Jean Seberg, the Iowa teenager who was plucked from obscurity and starred in that classic of French New Wave Cinema, “Breathless,” by Jean-Luc Godard. To persuade you that this is not just about a cute girl in dishabille, everything’s in black-and-white, just like the 1960 movie. The setting is invariably the bedroom, but behind all the naked flesh and tussled sheets are references to famous paintings. And finally, to make absolutely sure you take this project seriously, many of the scenes include the painter himself as a small boy. So it’s not just about an elfin nymphet with big breasts, it’s also a self investigation of the male gaze.

Contemporary academic painting often doesn’t look especially good because it doesn’t need to. Yet Adams has succeeded in making black and white feel like delicious colors, and with the skill of a commercial illustrator, he has wonderfully rendered each and every object. But keeping with their dogmatic functions, the human figures feel more like store mannequins than real people, and despite some engaging passages, the overall designs are often cluttered and claustrophobic. Even if serious academic issues are being raised, there still is an ambience of giddy silliness, making this viewer feel like John Belushi in “Animal House,” peeking through the sorority house window to see the coeds romping around in their panties.

There’s good reason why American galleries hardly ever exhibit beautiful paintings of attractive, naked young women. They’re anathema to both the Christian right and the academic left, exemplifying as they do the power of either Satan or the patriarchy. A postmodern strategy has allowed Adams to keep his figures attractive, but rather than positively orient viewers toward the world as it is or should be, he flatters their mutual erudition, while fantasizing about an exceptionally attractive, vulnerable and confused young woman who eventually killed herself at the age of thirty-nine. So there’s something of a bad odor about the entire project. As one more gesture of self-awareness, perhaps the artist should have painted one of the figures holding its nose, as one of his fellow Mannerists did 500 years ago. (Chris Miller)