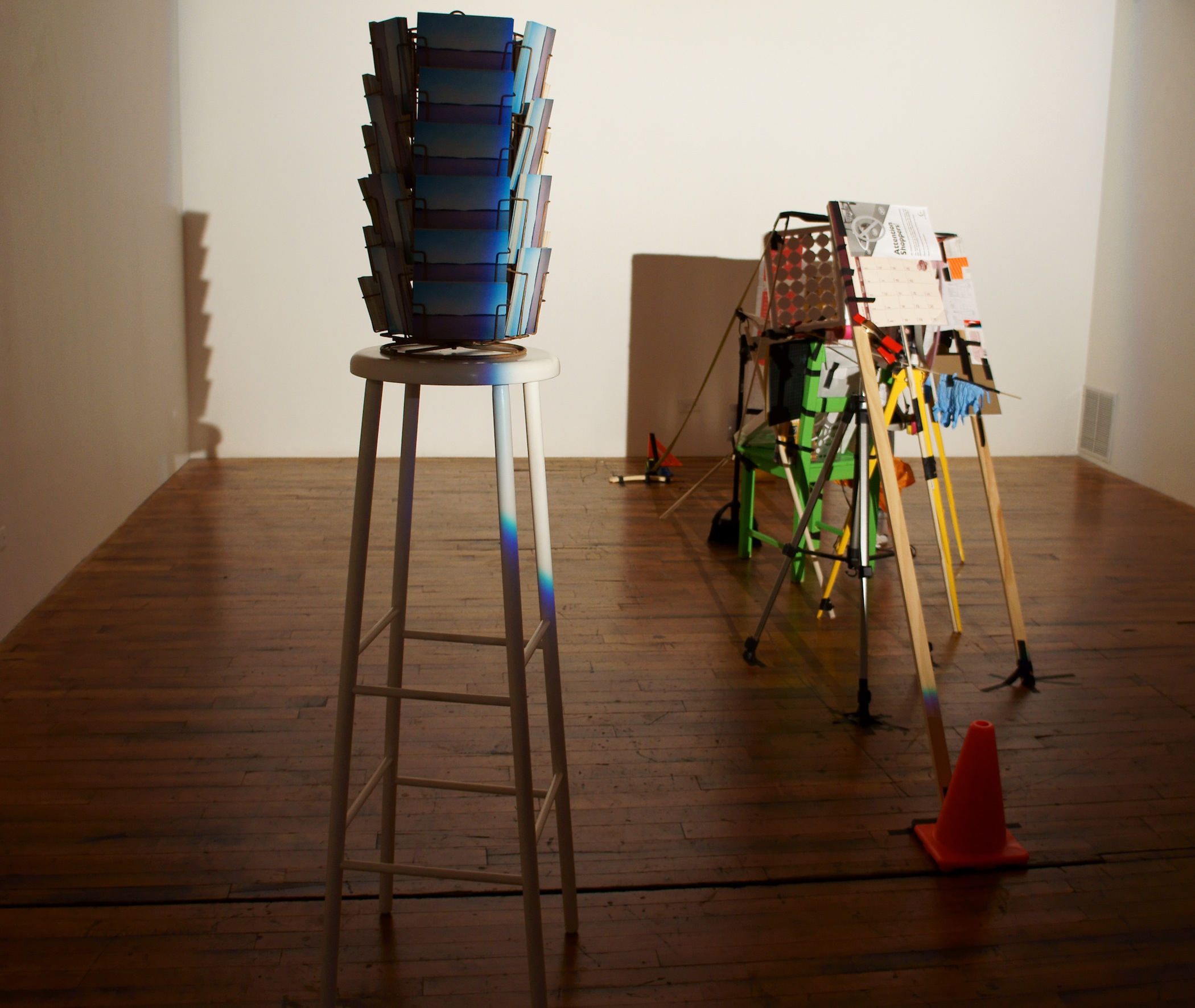 “Cynic” seems an unfair label for the uncompromising Diogenes, who carried a lantern during daylight in search of an honest man. At bottom, Dada was similarly nostalgic for art as a lost ideal, an end in itself rather than a vehicle for reflection. This starry-eyed hopelessness applies to an evolving exhibition now in its third iteration at ADDS DONNA, whose title, “Wish You Were Here,” underscores the theme of glibness thinly masking absence and loss. Jo Hormuth’s turning display, containing identical postcards of an expressionless Midwestern landscape, perched on a tall “custom-made” stool and not failing to resemble a shoe rack, neatly evokes two famous Duchamp “readymades” at once. Echoing this piece in “Nearby cards from Bertha’s cards,” Laura Mackin displays two columns of found postcards depicting various locations in Michigan, with one set showing the locations as they appeared in the 1930s, and the opposing set showing the same places in the 1960s and 1970s—a visual taxonomy of a state for whom, like the art world, the twentieth century was a period of notoriously short and violent epochs. This fast-forwarding landscape motif carries over fairly literally in Mackin’s video, “Zoom (Dean, 1962-2006),” a rapid-fire montage of camera zooms culled from over a hundred movies. The cycling horizontality of this piece is counterpointed in Michael Milano’s aspirationally vertical video “Nearly,” a seamless loop of a rocket blasting through the upper reaches of the atmosphere.

Friedrich Schiller, in his 1795 treatise “On The Aesthetic Education of Man,” enjoins the isolated artist to enlighten his benighted contemporaries by striving to summon lost perfection: “Wherever you find them, surround them with great and ingenious forms, enclose them all round with the symbols of excellence, until actuality is overwhelmed by appearance and Nature by Art.”  The tortured creator struggling to communicate the sublime is evoked by Gareth Long’s looped video of Daffy Duck on the gallery website, huddled in the fetal position and flailing in neurotic anguish, as well as in Long’s physical re-creation of “Don Quixote,” the archetype of the modern novel and a tragic satire of medieval romances. In Long’s version at ADDS DONNA, displayed splayed open on a pedestal, a digital voice-recognition program retyped the novel, doing its best with the audio book, but resulting in numerous glitches—including the name of the protagonist. In “The Discreet Charm of the Bourgeoisie,” fragmented and fallen language is mourned by Ama Saru and Hsiao Chen via the medium of twisty-straws in champagne glasses that spell out half-words, such as “prag” and “matic,” or “narra” and “tive.” And Yogi Proctor’s impish Plexiglas plaques, sprinkled throughout the gallery, include two bearing the attribution “curated by Sadie Coy,” (“Say Decoy,” if you like), one of which transcends the gallery perimeter, mounted on the water tower atop the building. The ruined post-industrial vastness of Chicago’s West Side, which provides the backdrop to this rooftop “one-liner,” also offers a perfect setting for this elegiac exhibition. (Bert Stabler)