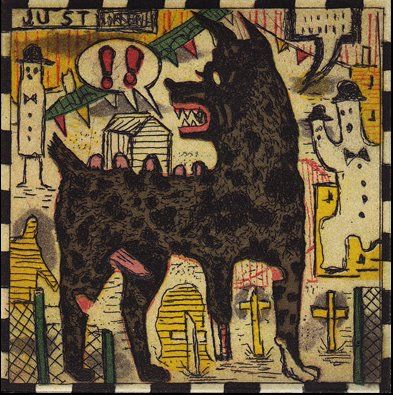 After eight years away from the copper plates, Tony Fitzpatrick has bought a new press, hired a master printer and staff, and is back in the printmaking business with two new, complementary series of multicolor etchings. As with his designs for collage, he starts with a big evocative figure in the center and then works out to the edges with the horror vacui of a medieval monk, compulsively free-associating to fill in the margins with energetic patterns that carry the mood of his story. His art is about life, not the art world, and it follows his endless exploration of what’s going on—in Chicago, Mexico, New Orleans, Japan or wherever else his voracious curiosity has led him. This is a man of big appetites, including a nostalgia for his own troubled youth which actually appears rather idyllic, with two good parents in suburbia and all of the trouble strictly of his own making. This personal history is presented in the series called “Nickel History” and, appropriately enough, the self-congratulatory etchings are quite small. He’s just so damn happy to be Tony, the kid who has always wanted to be left alone in his own little world. The other new series of etchings looks outward, continuing his interest in the hobo alphabet and the rough, romantic life of American vagrants after the Civil War. 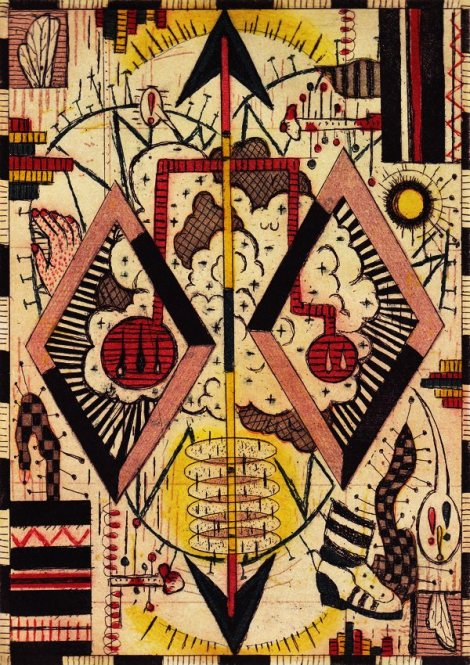 As in all his visual work, the story is told through a collection of recurring personal symbols that might leave the viewer puzzled. Though he doesn’t explain them, he does put several of the images up on a website to accompany his rambling prose, giving the reader an opportunity to hang out and learn from a man who has seen a lot of the world, from bottom to top. Given his persistence and success in the art business, it would be hard to call him an outsider. But he’s had nothing to do with any kind of academic art: classical, modern or contemporary. He’s more like a self-taught, traditional bard, traveling around, sharing the news and entertaining the folks. However grim the content of his stories might be, they’re always wrapped in a bright, bouncy, cheerful package. Which is to say, he’s not aiming all that high. Though meditational, it’s less about reaching the mountaintop and more about getting through each day, with heart, soul, kindness and compassion. He claims to be non-religious, but all he’s lacking is the dogma and church to be a Franciscan. (Chris Miller)