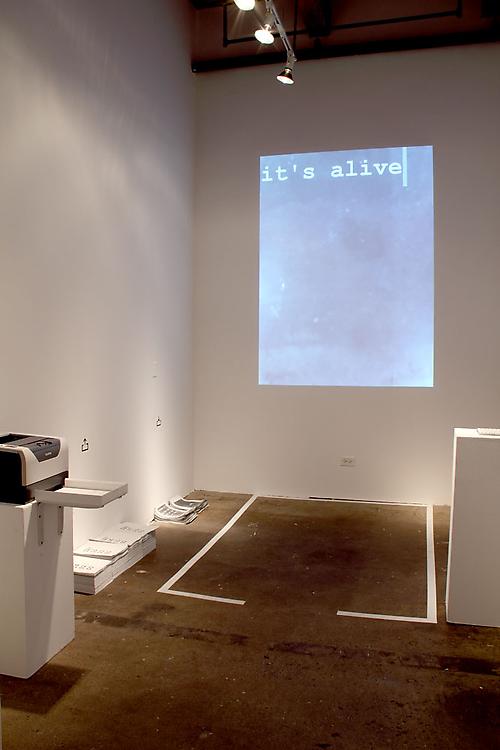 Designed to represent an automated book-production facility, “Living Book” is a collaboration by Plural (the graphic design duo Jeremiah Chiu and Renata Graw) and Jonathan Krohn of The Center for Book Technology. The exhibition uses custom software designed by Michael Bingaman to capture images via an overhead camera, which are projected on a wall. Viewers may use an accompanying keyboard to make text appear over the projected images. In theory, a nearby printer would print out a page of the resulting text and images every sixty seconds for five hours a day, five days a week. However, a sound concept doesn’t always lead to flawless execution.

On a recent Saturday, the camera and keyboard were working with the images projected against the blank white wall, but the printer spat out blank page after blank page. A gallery attendant had to refill the paper tray just to demonstrate how the exhibit was intended to work. When working, the exhibit uses a combination of black and white imagery, Courier font, and mechanical automation to place the person inside the mode of book production. Instead of being passive readers, everyone is encouraged to be a writer in an effort to subvert that traditional reader-writer model. However, on this day, there were pages after pages that said “P. Funk” or “on demand XOXO.” It’s not clear if anyone really has anything to say, and by binding these pages into twenty-five books, the finished book might be nothing more than a mere curiosity. (Jason Kreke)