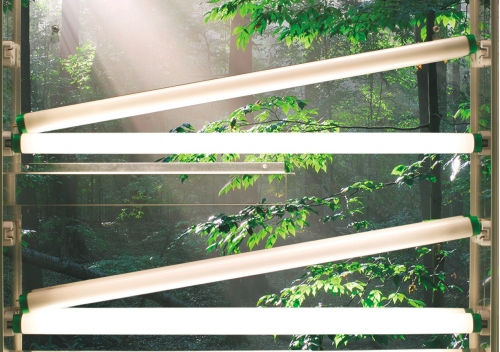 Susan Giles’ site-specific sculpture of the unbuilt Calatrava tower, toppled over inside The Mission, is a model of something unrealized. Although it might refer to the economic crash that scuttled the plans for the building, Giles’ “Crumpled Spire,” deftly built of wood, rests gracefully in the space, echoing the shapes of the windows, lighting grids and setting off the tin ceiling. Downstairs in the basement project room is an alluring and incisive set of photographs by Jeroen Nelemans that look beautiful at first glance but quickly assert a complex critical project that eludes the more poetic sculpture, upstairs. Our desire to lose ourselves in forest scenery, with light filtering through the trees in mysterious beams, is interrupted by crossbars of long narrow light bulbs revealing the rather harsh inner structure of exactly the kind of light boxes Nelemans uses to exhibit these uncomfortably over-realized landscapes. The forest scenes are enhanced by post-production techniques that Nelemans, a filmmaker as well, transfers from film. The bars of light, and the inner workings of the light boxes, cut us off from the pictorial space and draw us in at the same time; he uses the qualities of light, even artificial light, which in itself de-centers the viewer. The exhibit is completed by a set of drawings in the second room upstairs by David Salkin, who negotiates more ambiguous territory. Somewhere between drawings, doodles, renderings, maps or plans, they might be minimal schematic records of something we will never know. (Janina Ciezadlo)

Through February 24 at The Mission, 1431 West Chicago