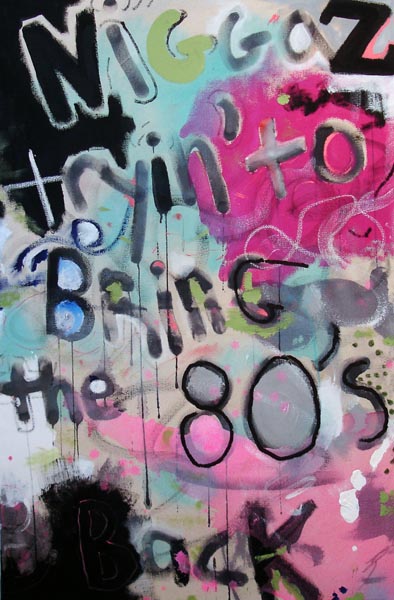 David Leggett paints while listening to the stand-up comedy of Richard Pryor and Eddie Murphy, which serve as kindling for his sometimes cartoonish, playfully rendered mixed media artworks. “In the early 1990s when Def Comedy came along, it was extremely popular, but if you listen now, it was horrible,” Leggett says. “They were doing impersonations of Eddie Murphy and Richard Pryor just using the punch lines. Saying ‘dick’ and ‘pussy’ doesn’t make it funny. Those are just words, and that’s kind of how I see some artists—they can say ‘Oh I’m riffing on this,’ but so what?” From his process to his product, Leggett is interested in inauthentic reproductions of 1980s art and hip-hop culture.

Leggett laughed readily, both at himself and his work, discussing his first solo show at Western Exhibitions, titled “It’s getting to the point where nobody respects the dead. Fresh to death.” Leaning back on a small chair in his compact East Garfield Park studio, narrowed further by layers of leaning paintings, Leggett said his work is not a “moral compass.” He treaded lightly on questions of racial or political tension, and when questioned about stamps of men in black face that appear in earlier works, he answered with an incredulous giggle that he bought the stamps on eBay, fascinated by the fact that they existed at all.

Leggett, who grew up in western Massachusetts and came to Chicago to attend SAIC in 2003, seizes his fair share of iconic imagery. But unlike those comedians, who call up infamous one-liners that rely on conjuring memories of having laughed, Leggett’s renderings do not attempt to reclaim their subjects.

In the painting “A Natural Death,” the word “Jackson” is diagonally scrawled in white cursive. Pink, white and black drips and lines fill the canvas, over which a sparkly skull presides, implying the whittling away of both Jackson’s postmortem identities. “Historically, once you die, people forget all of the horrible things you’ve done, and that was my interest,” Leggett laughs, easily locating humor in dark places. “Now that they’re dead, people focus on elements of their music and their art and not the poor decisions they made in their lives.” 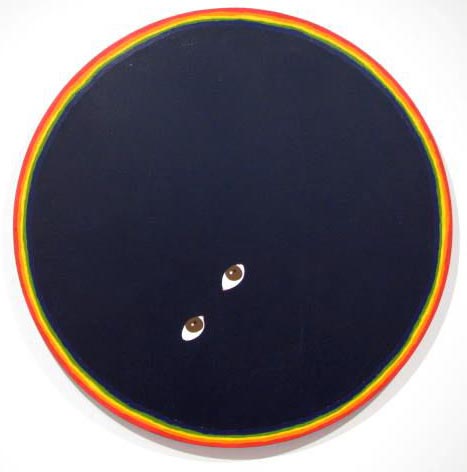 A concurrent solo show, at the Hyde Park Art Center, is showing a collection of nearly two-hundred drawings by Leggett, the product of his blog by the same name. Leggett made one drawing daily, organized in radio station fashion for audience collaboration with Request Tuesdays and Old School Fridays. (Claire Glass)