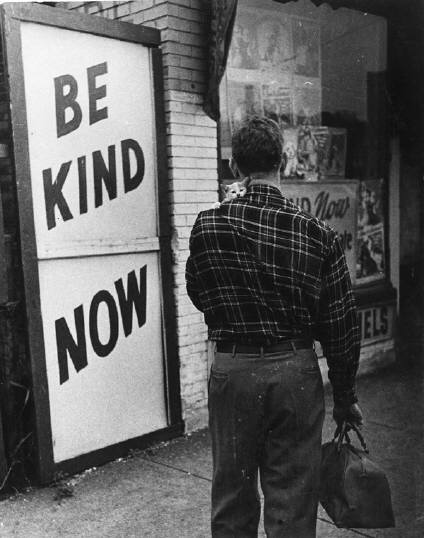 Chicago’s premier photojournalist Art Shay captured a moment in place and time, here in the early 1950s, when the gritty old city still held on, with its bittersweet ironies and brutalities, its harshness, and its anticipations of technology-fueled urbanity. Shooting straight and on the fly in unremitting black and white, Shay could pull the heartstrings and captivate the eye, as in his shot of a man taken from behind on a dingy commercial street who holds a duffel bag in one hand and a tiny kitten peering at us in the other, cradled on his shoulder; next to him a sign propped against a brick wall reads, “Be Kind Now.” Shay could also show the seamiest sides—a man, again shot from behind, stands in the Maxwell Street police station, his back drenched in blood as the others go about their business. It is really no different today, but it does not feel the same. (Michael Weinstein)